WARSAW – Infopulse, one of Ukraine’s biggest IT companies, had been planning to relocate hundreds of its staff to Poland for weeks, preparing for what was seen only as a worst-case scenario. Then came the invasion.

Some 70 employees with families managed to settle in Poland before Russia attacked Ukraine on Thursday. Initially, Infopulse planned to move as many as 500-700 people, up to 35% of its staff.

On Thursday, Infopulse employees with families headed for the border, but only a little more than a dozen crossed over before Ukraine banned all Ukrainian men between the ages of 18 and 60 from leaving, so that they can fight for their country.

Men in Ukraine can face up to 12 years in prison for failing to report for military conscription.

The company says that the initial decision about employee relocation was partly dictated by customer concerns about continuity of service and partly a response to calls from staff.

“We have not urged anyone, neither to move nor to stay, because every decision involves risk,” Lukasz Olechnowicz, Infopulse’s Polish CEO, told Reuters, adding that those willing to stay and fight could count on keeping their jobs and their salaries.

Olechnowicz said that three of his employees stayed at his home in Gdansk overnight, as the war came while they were on holiday.

Adam Brzostowski, Director of Business Development and International Relations Bureau at city hall in the Polish industrial city of Lodz, said Infopulse was one of a few companies that had correctly assessed the threat of a Russian invasion of Ukraine.

For nearly a year he had been trying to convince companies from Ukraine and Belarus to open their offices in Lodz, over 130 km south of Warsaw, but only four decided to move around 500 people.

Now, after the invasion, companies have been calling, asking him for help.

Sławomir Szymusiak, Director General of the Polish-Ukrainian Chamber of Commerce, said that several hundred people had called the chamber asking for help with relocation.

Romanian software automation powerhouse UiPath said on Friday it was providing financial and logistical assistance to its Ukrainian staff.

The company, valued at nearly $20 billion since going public on the New York Stock Exchange last April, opened an office in Ukraine in 2019 when it acquired Lviv-based startup StepShot. It currently employs 30 people in Lviv, some of whom have chosen to stay and others to relocate, it said. UiPath is helping both.

Back in Poland, Yanina Krymova, country HR for Infopulse, is still working on helping her colleagues with relocations, and also waiting for her mother, sister and nephew to join her in Warsaw.

“So many people died because of him, without any logic,” she said. “Honestly, he is the only person that I hate.”

(Additional reporting by Marek Strzelecki in Warsaw and Luiza Ilie in Bucharest; Editing by Nick Macfie) 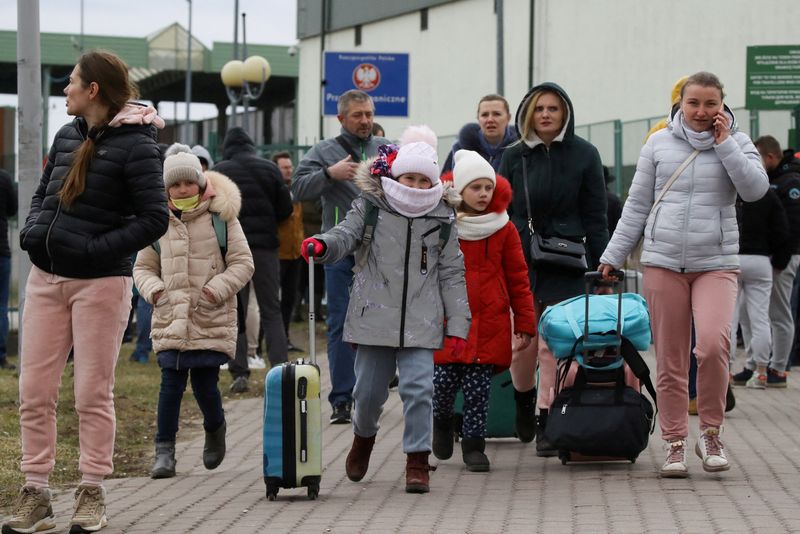