By Ted Hesson and Kristina Cooke

WASHINGTON – The United States is playing a secondary role to European nations as thousands of refugees flee Ukraine, providing emergency aid but signaling that Europe should be their primary destination.

As Russia invaded Ukraine this week, the United States dispatched disaster experts to the region to assess the need for humanitarian assistance and urged neighboring countries to keep their borders open to refugees.

President Joe Biden’s administration last year launched a mass evacuation of vulnerable Afghans as the U.S. military withdrew from Afghanistan, but expects Europe to take the lead in helping Ukrainians on the ground.

White House Press Secretary Jen Psaki said on Thursday that the United States was prepared to accept refugees but stressed that “most, if not the majority” of fleeing Ukrainians will want to go to Europe and that some countries neighboring Ukraine “have expressed an openness to it.”

Tens of thousands of Ukrainians, mostly women and children, crossed into Poland, Romania, Hungary and Slovakia on Friday as Russian missiles pounded the capital Kyiv.

Ukrainians can travel to the European Union without a visa for up to 90 days, an immediate pathway to refuge, according to the Migration Policy Institute (MPI), a Washington-based think tank.

Political parties in both the United States and Europe have sparred over accepting refugees in recent years.

U.S. Republicans have pushed for more immigration restrictions as they seek to take control of Congress in November elections.

The best outcome for displaced Ukrainians would be to return home safely, said Melanie Nezer, a spokesperson for HIAS, a resettlement agency formerly known as the Hebrew Immigrant Aid Society.

In the near term, refugee groups have urged the Biden administration to provide additional funding to Eastern European countries receiving Ukrainians and organizations in the region.

Up to 5 million people could flee, United Nations aid agencies said on Friday, adding that at least 100,000 people are already uprooted in the country and fuel, cash and medical supplies are running low.

Senator Robert Menendez, a Democrat and chairman of the Senate Foreign Relations Committee, has urged Biden to grant deportation relief and work permits to Ukrainians already in the United States through a program known as Temporary Protected Status (TPS).

Psaki said a decision would be made through a deliberative process involving multiple U.S. agencies and that she could not predict the outcome.

At St. Nicholas Cathedral School, a Ukrainian Catholic school in Chicago, principal Anna Cirilli said the school community is praying for peace, with many hoping that refugees can be supported in neighboring countries and can quickly return home.

“Most of the families want to stay in their own country,” she said.

(Reporting by Ted Hesson in Washington and Kristina Cooke in San Francisco; Editing by Kieran Murray and Rosalba O’Brien) 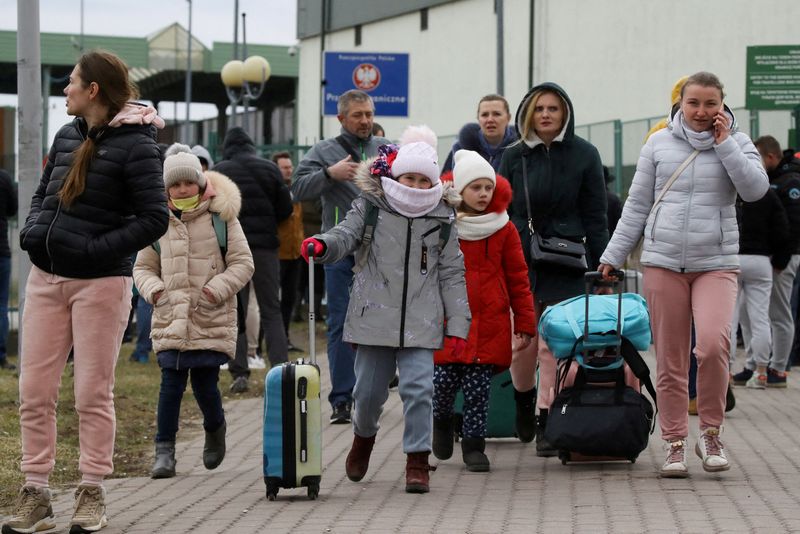