-The U.S. government on Friday joined European countries in slapping sanctions on Russian President Vladimir Putin and Foreign Minister Sergei Lavrov as Western nations sought to increase pressure on Moscow to halt its invasion of Ukraine.

The rare but not unprecedented U.S. imposition of sanctions on a head of state came just a day after Russian forces invaded Ukraine, assaulting by land, sea and air in the biggest attack by one state against another in Europe since World War Two.

“President Putin and Minister Lavrov are directly responsible for Russia’s unprovoked and unlawful further invasion of Ukraine, a democratic sovereign state,” the Treasury Department said in a statement late on Friday announcing the sanctions.

It said sanctions against a head of state were “exceedingly rare,” and put Putin on a short list that included the leaders of North Korea, Syria and Belarus. Further actions could follow.

Treasury said the moves built on a raft of other sanctions imposed this week that targeted Russian banks and rich oligarchs, cut Russia off from access to critical technologies, and restricted its ability to raise capital.

Earlier on Friday, EU states and Britain agreed to freeze any European assets of Putin and Lavrov, as Ukraine’s leader pleaded for faster and more forceful sanctions to punish Russia’s invasion of his country.

The imposition of sanctions against Putin and Lavrov reflect the West’s “absolute impotence” when it comes to foreign policy, RIA news agency cited a Russian foreign ministry spokeswoman as saying on Friday.

Edward Fishman, an Atlantic Council fellow who worked on Russia sanctions at the State Department during the Obama administration, said that while the sanctions on Putin are largely symbolic, targeting the Russian leader was a reasonable step for the United States and its partners to take.

“It certainly sends a very strong message of solidarity with Ukrainians who are under fire right now,” Fishman said.

Psaki said on Twitter that the Treasury Department would also impose sanctions on the Russian Direct Investment Fund, which she described as a “state owned financial entity that functions as a sovereign wealth fund, which is supposed to attract capital into the Russian economy in high-growth sectors.”

A Treasury spokesperson said the action against the Russian Direct Investment Fund would be in the coming days.

“We are united with our international allies and partners to ensure Russia pays a severe economic and diplomatic price for its further invasion of Ukraine,” Treasury Secretary Janet Yellen said in statement. “If necessary, we are prepared to impose further costs on Russia for its appalling behavior on the world stage.”

Treasury, which has already designated 11 members of the Russian Security Council, said it would continue to target Russian elites for “their role in bankrolling Russia’s further aggression against Ukraine, empowering Putin or participating in Russia’s kleptocracy.”

Putin urged Ukraine’s military to overthrow its political leaders and negotiate peace on Friday, as authorities in Kyiv called on citizens to help defend the capital from a Russian assault that its mayor said had already begun.

The sanctions targeting Putin are the latest punitive action from Washington over Russia’s aggression against Ukraine.

The United States this week imposed sanctions on Russian banks, members of the elite, and the company in charge of building the $11 billion Nord Stream 2 undersea gas pipeline connecting Russia and Germany.

Responding to reports that the U.S. government had ordered officials to stop most contacts with Russia, State Department spokesman Ned Price said the invasion of Ukraine had “fundamentally changed” Moscow’s relationship with Washington and other nations.

Price told reporters that U.S. officials will continue to engage with their Russian counterparts on important national security issues, including the talks to return to a 2015 nuclear deal with Iran. 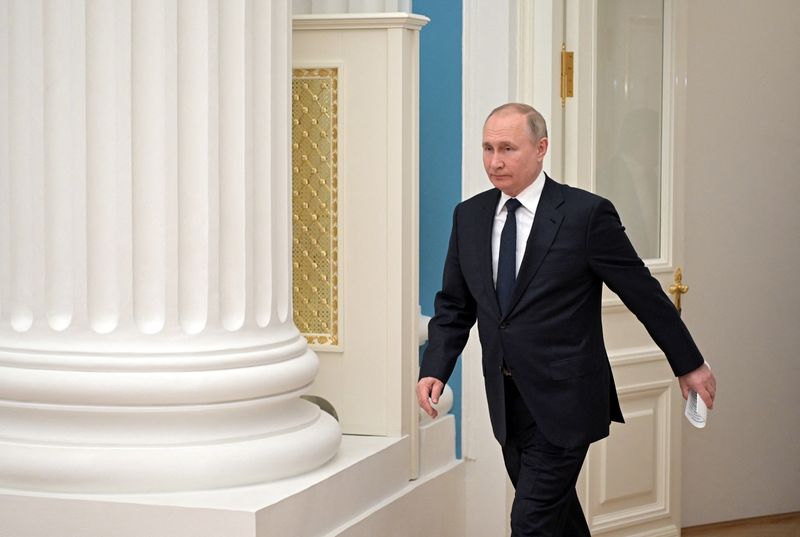