CHICAGO -U.S. wheat futures tumbled on Friday in a profit-taking setback after peaking earlier at the highest level since mid-2008 as investors turned back to equities and traders assessed potential disruption to supplies from Russia’s invasion of Ukraine.

Corn eased from Thursday’s eight-month peak, while soybeans slipped from a 9-1/2-year top in the previous session as traders liquidated long positions ahead of the weekend.

The market continued to gauge the consequences on grain and oilseed supplies from the conflict between two of the world’s biggest exporters.

“There’s a big shift in money flow ahead of the weekend,” said Karl Setzer, market analyst with Agrivisor.

“We got into overbought territory on the charts and posted a big correction. Throw in the uncertainty about how long exports will be disrupted, and that’s why we’re seeing this profit-taking and weak longs getting flushed out.”

Moscow’s invasion led Ukraine to close its ports while Russia halted commercial shipping in the Azov Sea, raising the prospect of importers having to find alternative supply sources.

Russia and Ukraine account for 29% of global wheat exports, 19% of corn exports and 80% of sunflower oil exports.

Chicago Board of Trade May soft red winter wheat dropped to $8.59-3/4 a bushel, down the expanded 75-cent daily trading limit, after earlier touching a 13-1/2-year high for a most-active contract. The contract was still up 6.9% for the week. May K.C. hard red winter wheat also fell by the 75-cent limit.

Trading limits for both markets will remain at 75 cents for Monday’s session, CME Group said. 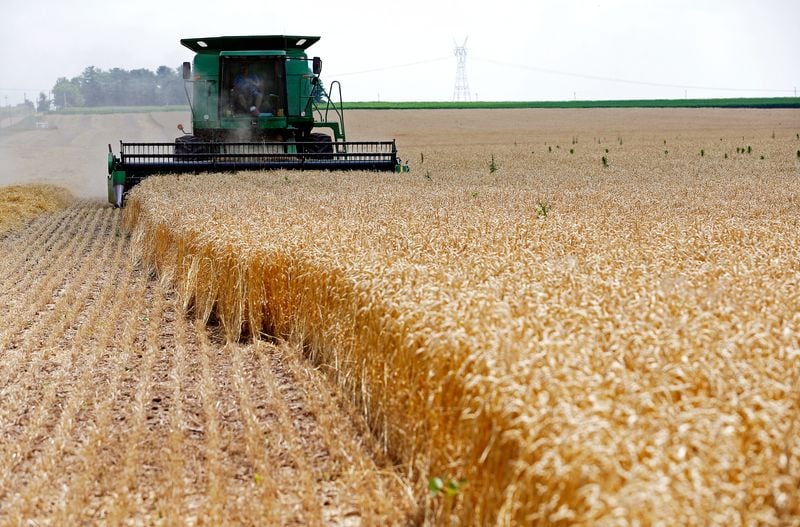