WASHINGTON -President Joe Biden said on Monday Americans should not worry about a nuclear war after Moscow put its nuclear deterrent on high alert amid a barrage of Western reprisals over Russia’s invasion of Ukraine.

In response to a question about whether U.S. citizens should be concerned about a nuclear war breaking out, Biden said “no.” He was responding to a shouted question at the end of an event at the White House.

White House officials said earlier in the day the United States sees no reason to change its nuclear alert levels at this time, a point press secretary Jen Psaki reiterated during her briefing with reporters.

“We are assessing President Putin’s directive and at this time, we see no reasons to change our own alert levels,” Psaki said.

Russia’s defence ministry said on Monday its nuclear missile forces and Northern and Pacific fleets had been placed on enhanced combat duty, the Interfax news agency reported, in line with an order the previous day from President Vladimir Putin.

Psaki said the United States and the 30-member NATO alliance have no “appetite or desire” for conflict with Russia. “Provocative rhetoric like this regarding nuclear weapons is dangerous, adds to the risk of miscalculation, should be avoided and we’ll not indulge in it.”

Biden held a call with U.S. allies and partners on Monday, as a U.S. official said a nuclear war must never be fought. Joining the call with Biden were leaders from Canada, France, Germany, Italy, Japan, Poland, Romania and the United Kingdom along with NATO’s chief and top officials from the European Union.

A White House official told Reuters that Russia and the United States have long agreed that use of nuclear weapons would have devastating consequences.

Russian and Ukrainian officials met on the Belarusian border to discuss a ceasefire on Monday while invading Russian forces encountered determined resistance from Ukrainian troops and civilians on a fifth day of conflict.

Russia’s invasion of Ukraine has also triggered a Western economic and corporate response unprecedented in its extent and coordination.

The United States on Monday blocked Americans from engaging in any transactions involving Russia’s central bank, dealing a crushing blow to the country’s economy. 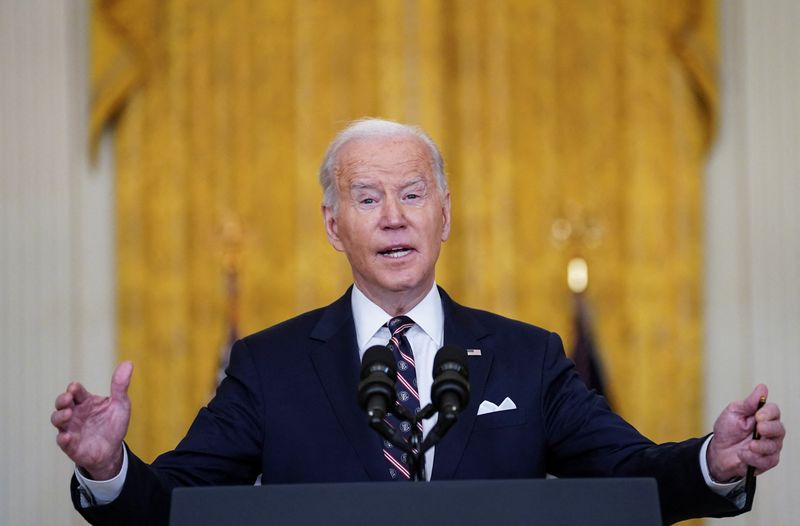