By Krisztina Than and Anna Wlodarczak-Semczuk

TISZABEC, Hungary/WARSAW – Poland sought to ease passage into the European Union on Monday for around quarter of a million Ukrainians waiting at European border crossings in freezing conditions after fleeing the Russian invasion of their country.

With men of conscription age prevented from leaving Ukraine, groups of mainly women and children arrived at borders in eastern Poland, Slovakia and Hungary and in northern and northeastern Romania.

Wait times to cross borders ranged from a few hours at small crossings to several days at busier ones such as Medyka in Poland, where lines on the Ukraine side stretched back dozens of kilometres (miles).

“The queues are huge,” said Polish prime minister’s chief of staff Michal Dworczyk, who added border police were allowing in people without documents and that the government was talking with Ukrainian counterparts about simplifying procedures.

“If we count the functioning border points there are certainly over a quarter of a million people at the borders,” he said.

Another Polish official said Ukrainian border guards were slowing the flow of people as they sought to separate the men of fighting age.

Romanian Interior Minister Lucian Bode said that with people queuing 20 to 30 hours on the Ukrainian side to get into Romania, it was crucial to agree on how to process their paperwork to shorten waiting times on the EU side as well.

The head of a U.N. agency said on Monday that more than 500,000 people have fled Ukraine to neighbouring countries since the start of Russia’s invasion last week. EU officials have said the war could displace 7 million people.

The European Union is also preparing to grant Ukrainians who flee the war the right to stay and work in the 27-nation bloc for up to three years.

Crowds of people and cars have started to clog border towns such as Medyka, as refugees wait to be picked up.

The mayor of Przemysl, Wojciech Bakun, appealed to Polish volunteers to stop showing up with cars to offer transport for newly arrived groups, saying traffic was becoming unmanageable.

As officials searched for ways to unclog bottlenecks, Ukrainians living in the European Union anxiously waited at border crossings to greet family members.

“We were waiting here three days and they were on the road for over four days,” said Veronika Sahlikova Kufelt, who travelled from Germany to meet her nieces and grandmother at the Ubla crossing in Slovakia.

In Hungary, in the Tiszabecs village nestled in a bend of the river Tisza, one Ukrainian refugee – Tanya – arrived at 4 a.m. with two children aged one and eight.

As she waited for a friend to drive them to her husband in Lublin in southeastern Poland, cars with licence plates from Hungary, Italy and the Czech Republic came and went, ferrying refugees.

Her town of Kalush in western Ukraine had been relatively calm before she set off.

“Only sirens were wailing,” Tanya said.

Poland, whose Ukrainian community of around 1 million is the region’s largest, has welcomed many people escaping Ukraine.

Polish border authorities said almost 327,000 have entered Poland since Feb. 24, with around 73,300 arriving on Monday.

At Medyka, Poland’s busiest border crossing, officials loaded new arrivals into tour buses before ferrying them to a reception centre in the nearby town of Przemysl where friends, relatives and volunteers waited.

New arrivals huddled in blankets around fires as they waited in the snowy, cold weather to leave the reception centre.

“I took a train from Kyiv to Lviv to a point where the taxi put us,” one Ukrainian woman said. “I walked the last 50 kilometres.”

Across central Europe, authorities set up makeshift reception centres in tents where people could get medical aid and process asylum papers, while thousands of volunteers have driven to the borders with donations of food, blankets and clothes.

In the capital Warsaw, local authorities said local residents had listed some 2,500 apartments where refugees could stay.

In Romania where volunteers were trying to provide raincoats in snowy conditions, more than 74,000 Ukrainians have arrived since Feb. 24, with more than half departing for destinations in other countries, officials said. 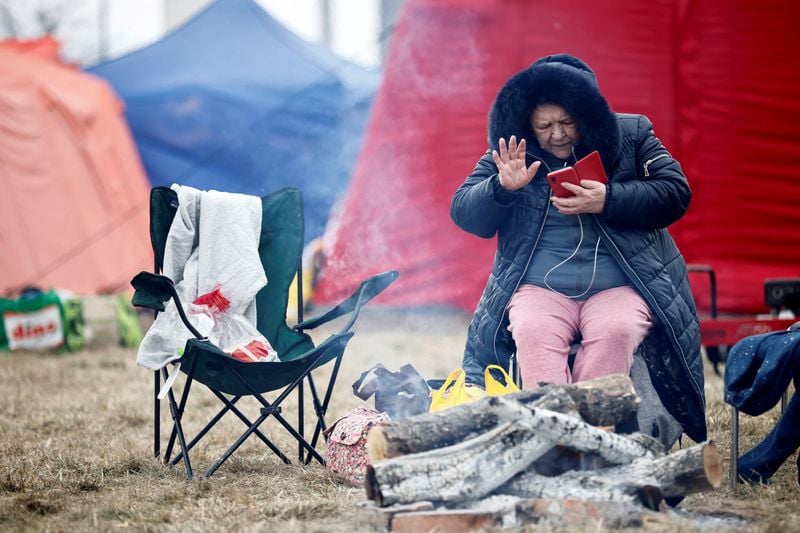 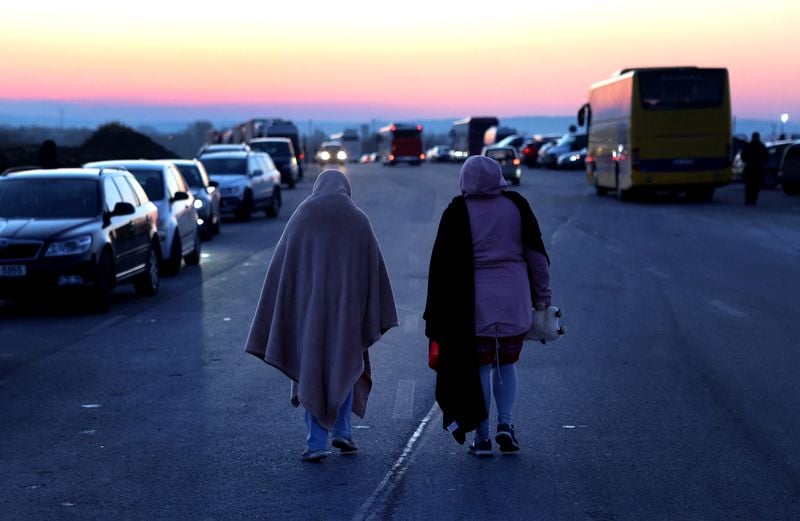 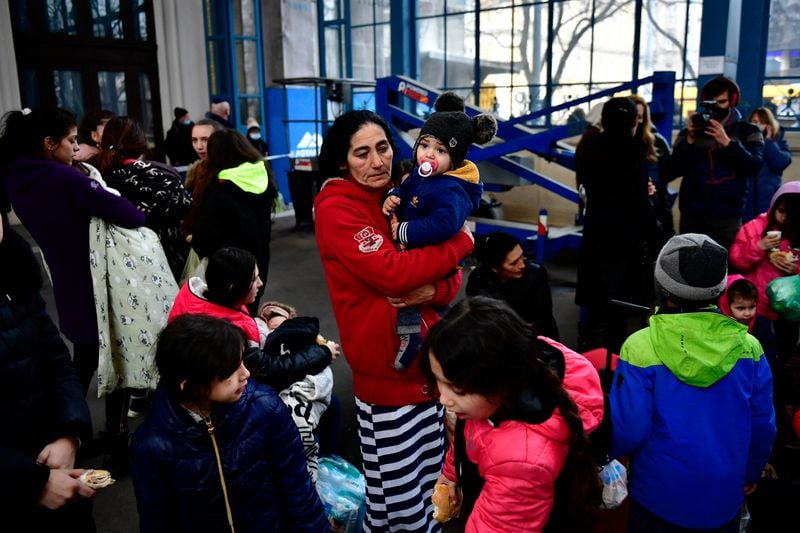 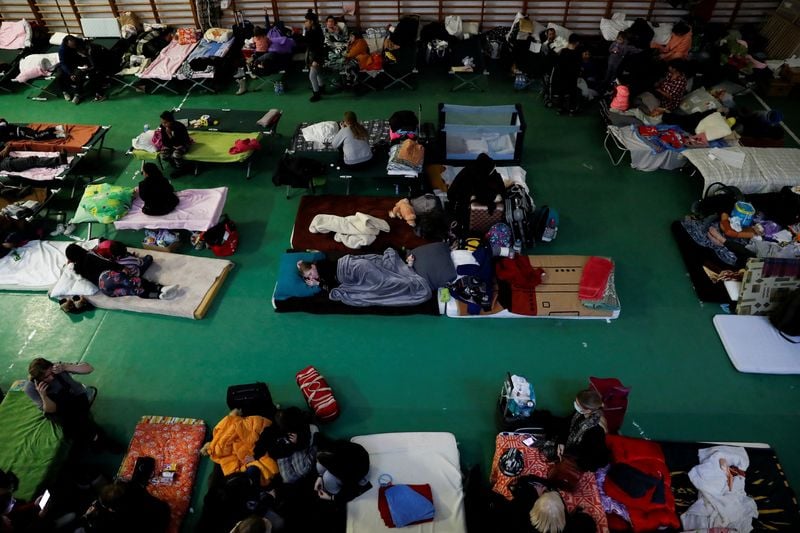 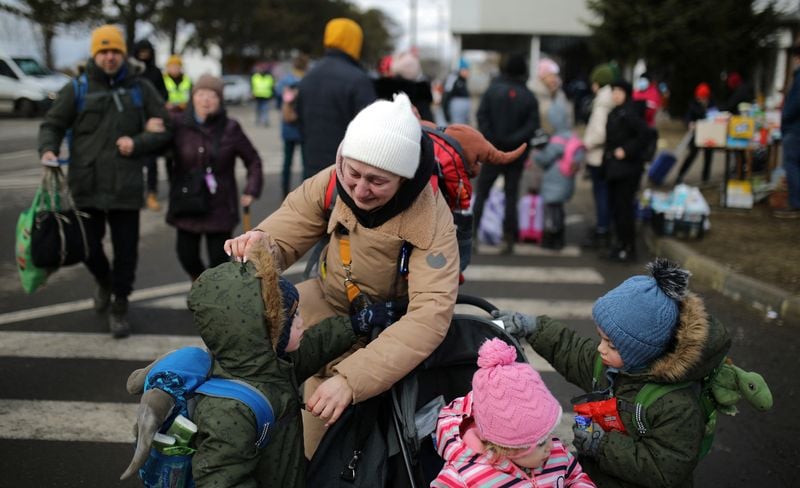 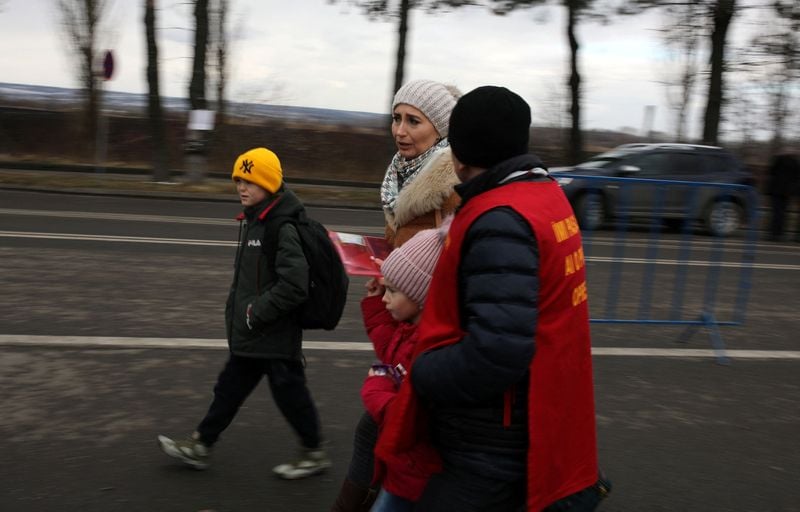