WASHINGTON -Americans’ approval of U.S. President Joe Biden’s response to the Russian invasion of Ukraine rose over the past week, with 43% saying they approve in a Reuters/Ipsos poll completed on Tuesday, up from 34% last week.

However, Biden’s overall approval numbers remained virtually unchanged, with 43% of Americans supporting the way the president has handled his job, in a separate Reuters/Ipsos poll completed on Tuesday. More than half – 54% – said they disapproved of Biden’s performance, with 61% of respondents saying the country was on the wrong track.

A strong majority – 71% – of respondents to the poll on Ukraine said they believed the United States should provide it with weapons to respond to attacks that have seen Russians bomb urban areas as a six-day assault on its neighbor stalls. Some 77% said the United States should impose additional sanctions on Russia as a result. Support was bipartisan, with majorities of Democrats, Republicans and independents backing those moves.

A majority of respondents, 58%, said paying more for fuel and gas because of the crisis was worthwhile to defend another democratic country. That was up from 49% who agreed with that statement in a poll taken on Feb. 23 and 24. Democrats were more likely to agree strongly or somewhat with that stance than Republicans and independents.

However, some 47% disapproved of Biden’s response to the crisis, more than the 43% who approved of it. Biden’s overall popularity has held near the low point of his presidency in recent weeks.

He will have another chance to reach out to Americans on Tuesday night, when he gives his State of the Union address. Biden intends to use the annual speech both to stress the importance of countering Russian President Vladimir Putin and to push his domestic economic agenda, administration officials said.

The poll on Ukraine was conducted online and in English throughout the United States. It gathered responses from 1,005 adults and has a credibility interval, a measure of precision, of 3.8 percentage points. 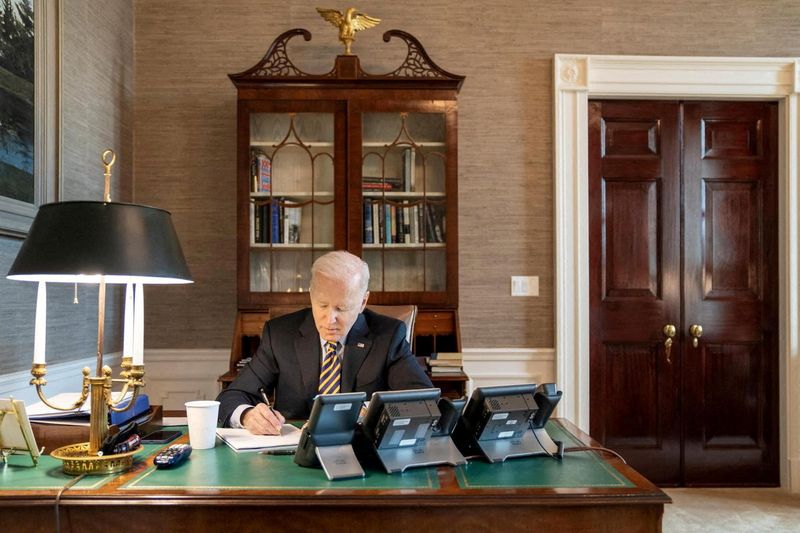