NEW YORK -The rouble weakened past 100 against the dollar in Moscow trade and hit a record low of 117 in other markets on Tuesday, threatening the living standards of ordinary Russians as the country is hit by harsh Western sanctions following its invasion of Ukraine.

The currency had found some support after Russian authorities ordered exporting companies, among which are some of the world’s biggest energy producers from Gazprom to Rosneft, to sell 80% of their forex revenues on the market, as the central bank’s own ability to intervene on currency markets was curbed.

Later in the day, Russian President Vladimir Putin issued a decree banning the export of cash in foreign currency exceeding $10,000 in value with effect from March 2, according to a Kremlin statement.

But even the session-strong dip under 90 per greenback had left the rouble well shy of the 75 to the dollar it traded at before Russia recognised two breakaway regions in eastern Ukraine and sent troops into its neighbouring country last week.

After the Moscow close, the rouble weakened to as much as 117 per dollar and was trading near 105 in late trading in New York.

Major Russian banks have been shut out of the SWIFT international payments system.

The rouble has tumbled since the start of Russia’s invasion of Ukraine, at one point losing a third of its value in Moscow trading, prompting the central bank to more than double interest rates to 20% and adopt a range of other urgent measures.

Moscow calls its actions in Ukraine a “special operation” that it says is not designed to occupy territory but to destroy its southern neighbour’s military capabilities and capture what it regards as dangerous nationalists.

Share trading on the Moscow Exchange was suspended for a second day after sharp sell-offs hammered the market since mid-February.

Russia said on Tuesday it was placing temporary restrictions on foreigners seeking to exit Russian assets, and it ordered the spending of up to $10 billion from its rainy-day fund on buying shares in Russian companies.

But an ETF of Russian stocks traded in the United States fell 24% Tuesday for a combined 47% drop in two days and set a record closing low, while the London-listed iShares MSCI Russia ETF lost a third of its value on Tuesday and is down 83% since mid February.

“Price is the great arbiter and the price falling the way it is tells you that at least right now, the market’s a bit skeptical about that demand,” said Sameer Samana, senior global market strategist at Wells Fargo Investment Institute.

“If that type of statement or show of force was credible, clearly it wouldn’t be falling as quickly.”

The weak rouble is set to reduce living standards in Russia and fan already high inflation, while Western sanctions are expected to create shortages of essential goods that people in Russia have become used to, such as cars.

The Institute of International Finance (IIF), a trade group representing large banks, warned that Russia was extremely likely to default on its external debts as well, and that its economy would suffer a double-digit contraction this year.

The Russian central bank and finance ministry did not reply to a Reuters request for comment on the possibility of defaults.

Inflation will spike in the short term but over the longer term could slow as people in Russia switch to a money-saving mode, said Dmitry Polevoy, head of investment at Locko-Invest. 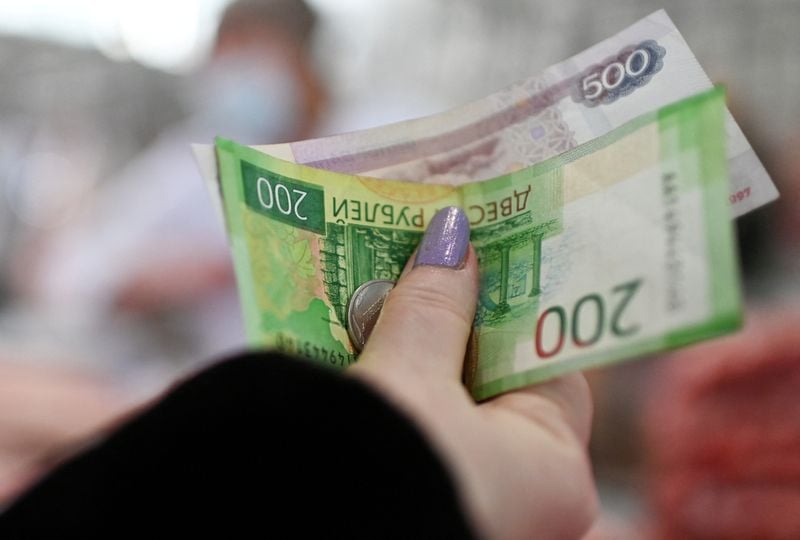