By Barbara Goldberg and Brendan O’Brien

NEW YORK – Since Russia’s invasion of Ukraine, gun rights advocates in the United States have sought to use the crisis to bolster their position on the U.S. Constitution’s Second Amendment to keep and bear arms, injecting a new element into the heated debate.

Arguments linking the invasion to gun rights have cropped up this week across social media, in a post by the National Rifle Association and during a legislative vote in the Georgia statehouse.

“What is happening in Ukraine proves the wisdom of our founding fathers in drafting the Second Amendment,” the NRA said in a blog post on Monday, pointing to Ukrainians who have armed themselves to defend their country.

Anti-gun violence advocates, however, point to increasing fire-arms deaths in the United States and say tighter regulations and fewer guns are what is needed.

“The tyrannical actions of Vladimir Putin don’t erase the fact that 45,000 Americans died from gun violence in 2020, nor do they erase the urgent need for commonsense, popular gun violence prevention policies like background checks and funding for community violence intervention programs,” Ambler told Reuters.

U.S. Congress candidate Zach Nunn, an Iowa Republican and Air Force veteran who worked with the State Department in 2019 to help monitor Ukrainian elections, told Reuters the crisis underscored the importance of the right to bear arms.

“In Ukraine today I would offer that a lot of people are waking up and saying that this is not only the best way to protect their country but to preserve what they hold dear in a democracy,” Nunn said in an interview on Tuesday.

The terms “Ukraine” and “#2A” – shorthand for the U.S. Constitution’s protection of the right to keep and bear arms – have been twinned on social media posts since the Russian invasion last week.

“Thank God the people in the Ukraine have the right to take up and bear arms against their aggressor. Thank God in the U.S. we have the #2A. #NRA,” North Carolina’s Republican Congressman Greg Murphy, M.D., said on Twitter.

Ukraine was among the arguments wielded by Republicans to win a 34-22 vote in the Georgia state Senate on a concealed carry bill that split down party lines on Monday.

“I would be willing to bet you today that 99 percent of the people of Ukraine would give anything that they have to have a Second Amendment right to keep and bear arms,” Lindsey Tippins, a Republican state Senator, said in asking his fellow legislators to back the bill.

The “constitutional carry” gun law, which would allow legal weapons carriers in Georgia to carry a concealed firearm without applying for a permit, now goes to the Georgia House.

(Reporting by Barbara Goldberg in New York and Brendan O’Brien in Chicago; additional reporting by Rich McKay in Atlanta; Editing by Stephen Coates) 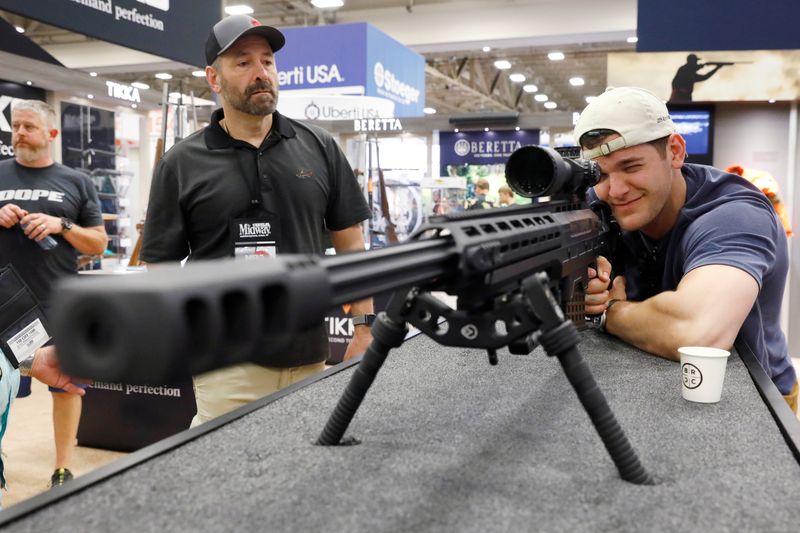