By Krisztina Than and Alicja Ptak

TISZABECS, Hungary/MEDYKA, Poland -Ukrainians arriving into the European Union on Tuesday described their frantic journeys to the border after leaving behind husbands and fathers to fight a Russian invasion and escaping their homes to the sound of shelling.

As a massive Russian convoy rumbles toward the Ukrainian capital Kyiv, the United Nations said more than 660,000 refugees had fled to neighbouring countries since Russian President Vladimir Putin launched what he has called “a special military operation” last Thursday. [L1N2V408B]

At the Hungarian border crossing Tiszabecs, a young mother cradled a baby in her arms as she and her son recounted watching rockets stream through the air before they drove for four days from the capital Kyiv.

“I saw war, I saw rockets,” said 15-year-old Ivan, who looked exhausted and pale after the journey. The family, whose father stayed behind to fight, travelled in two cars carrying Ivan’s three sisters, two aunts and grandmother.

New arrivals continued to pour across central European border crossings, with news of fierce fighting, civilian deaths and the massive Russian convoy stoking worries of those fleeing the war.

Across central Europe, authorities set up makeshift reception centres in tents where people could get medical aid and process asylum papers, while thousands of volunteers have driven to the borders with donations of food, blankets and clothes.

Most of the refugees escaping the war have crossed into the European Union from borders in eastern Poland, Slovakia and Hungary and in northern and northeastern Romania.

Poland, whose Ukrainian community of around 1 million is the region’s largest, has welcomed a big chunk of the arrivals. Polish officials estimate around 400,000 people have so far entered from Ukraine.

The country’s foreign minister Zbigniew Rau called for further sanctions on Russia if Moscow does not end its invasion in Ukraine, estimating that Poland might end up accepting one million refugees.

“WE HAVE NOTHING NOW”

At the Medyka crossing, Poland’s busiest along its roughly 500-kilometre (310 miles) border with Ukraine, people huddled around a bonfire in freezing temperatures as they waited for buses to take them to reception centres. Discarded bottles, clothes and other items littered the road, and a few hundred people gathered near a local grocery store.

Also at the crossing was Ibrahima Sory Keita, who had arrived in Melitopol three weeks ago from Guinea to begin studies.

Cities under siege across Ukraine are home to tens of thousands of African students studying medicine, engineering and military affairs. Thousands of Indian students are also trying to flee.

The U.N. migration agency estimated about 470,000 foreign nationals, including students and migrant workers, were stranded in Ukraine and urged neighbouring countries to grant them refuge if needed.

Keita and a few friends raced to the border when fighting broke out, walking the final 45 kilometres on foot.

“Everything hurts right now,” he said after crossing the border. “I haven’t had a chance to lie down for 4 days. I am shaking (from cold) and I need to sleep in a warm place.”

Some refugees were met by family members already working in the European Union who waited at the many border crossings, while local residents and officials across the region offered apartments and set up reception centres for temporary lodging.

Days of waiting to cross into the European Union also began to take its toll, with some new arrivals describing fuel shortages and lines moving only a kilometre a day.

“People are very tired physically and mentally in these queues,” Tatiana Melychuk, 37, who fled from Ivano-Frankivsk with her two children. “If someone breaks the rules people get aggressive.”

At some border crossings, queues on the Ukrainian side stretched back for kilometres.

Hungarian police reported that more than 60,000 people have arrived in the country since the Russian invasion while nearly 90,000 have entered Romania.

In Budapest, a newly-arrived Ukrainian man in his 60s met by volunteer workers worried about his sons who stayed behind in Kyiv and wondered whether he would ever return to his home.

“I think this war will be very long in time,” Amir, who did not want to give his last name, said at the Budapest train station. “I left my house, my car, all of my profit in my life, I left all. We have nothing now.” 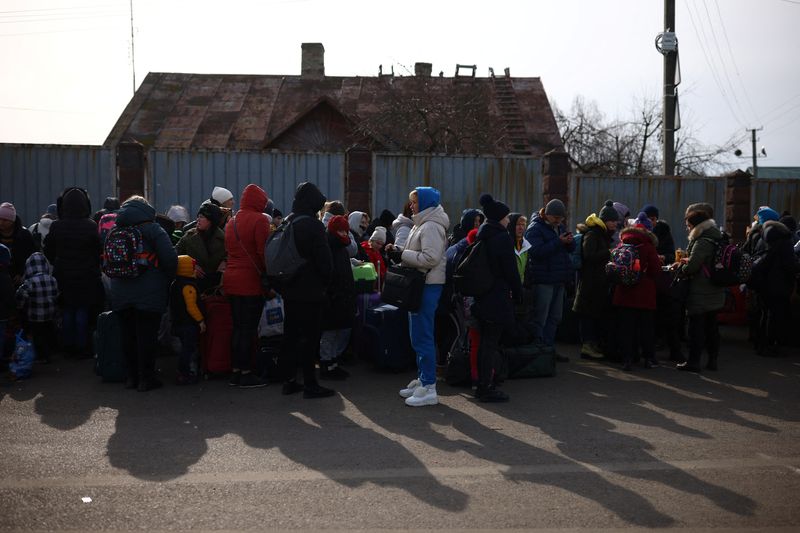 Three Smuggling Events Leads to the Arrest of 12 Subjects