TORONTO – A three-week occupation of the center of Canada’s capital last month resulted in part from police underestimating anti-government protesters by assuming they would leave within days, according to police sources and police leadership testimony.

That miscalculation was compounded by a reluctance to crack down on the demonstrators once they had become entrenched in downtown Ottawa, partly out of fear of escalation, a police source and multiple observers told Reuters.

The protesters initially rallied opposition to COVID-19 vaccine mandates for cross-border truck drivers, but the blockade became a demonstration against government and Prime Minister Justin Trudeau.

“What they did … they could have done on the first weekend. Their authorities were there, all along,” said a source with knowledge of Ottawa Police operations who requested anonymity because he is not authorized to discuss them.

Two days before the convoy drove into town, Ottawa’s Police Services Board held a special meeting where police leadership repeatedly told their civilian oversight board they expected the convoy to leave two days after their expected arrival, according to a video recording of the meeting.

Deputy Chief Trish Ferguson told the meeting police were “well placed” in terms of resources and they had built-in “surge capacity” to deal with the protests.

Ottawa Police declined to comment on whether there was a failure in leadership, citing a review into police response to the “unlawful demonstration,” and did not immediately respond to a question about whether they had the authority needed to clear the protesters when they first arrived.

In a police services board meeting before police cleared the occupation, interim chief Steve Bell said he thought the police response had been “adequate and effective.”

“I wouldn’t agree it’s been a colossal failure of intelligence,” Bell told the board. He would not say what advice led police to allow the vehicles downtown in the first place.

He acknowledged that police need to improve their intelligence gathering.

“We have to look at other, better ways to collect better, more timely information.”

The protests paralyzed downtown Ottawa. As they dug in, then-Police Chief Peter Sloly called for almost 2,000 additional officers from provincial and federal forces.

What residents called a permissive police attitude may have stemmed in part from a lack of respect for Sloly, who was unpopular among his rank-and-file, or from fear of riling up hostile protesters, two city councillors and two criminologists said.

“Once it got to the point that the protest bedded in … officers might think, ‘We were put in this by bad management,'” said University of Ottawa criminologist Michael Kempa, who studies policing.


“In any large demonstration, they await a command decision. And that command decision comes from the executive level,” he said. Ottawa police officers felt caught between a hands-off leadership approach and public anger at perceived inaction, the source added.

Sloly, who stepped down last month amid widespread dissatisfaction with police response, could not be reached for comment.

Sloly was an outsider who became Ottawa police chief in 2019 promising reform in part by repairing relationships with Black communities. He took flak from the police union when he suggested in September 2020 that systemic racism existed in the ranks.

Sloly “didn’t have a chance” to win over his officers, said Eli El-Chantiry, a councillor and police services board member.

El-Chantiry was not on the board when he first spoke with Reuters but is now its chair after its previous chair was ousted.

Bell, the interim police chief, was asked at a board meeting last month, before the convoy was cleared, why the police response had been “inadequate” and whether officers were supporting the convoy, something he said they are investigating.

Ottawa Police would not tell Reuters how many officers are being investigated for complicity with the convoy.

Three members of the board resigned this week following reports one of them had attended the protests, although El-Chantiry said the member did so the first weekend and informed the board chair about it. The former member said he would issue a statement. 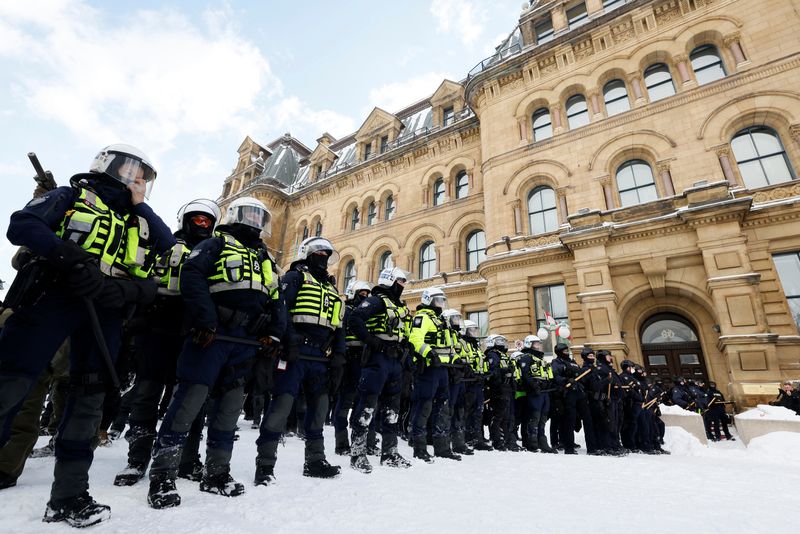