ISTANBUL – Textile and leather goods’ makers in Istanbul’s garment district are feeling the impact of Russia’s invasion of Ukraine as customers in Moscow and Kyiv have cancelled $200 million in orders in the past week, industry officials say.

The loss of trade adds to strains on Turkey’s economy, with officials estimating that more than $1 billion is directly at risk to the textile industry alone if the conflict in Ukraine continues.

Mustafa Senocak, head of the Istanbul Leather and Leather Products Exporters Association, said orders for “hundreds of thousands of pairs of shoes and thousands of leather jackets” have been cancelled.

“Some Russians say they can pay with the former rouble exchange rate. Otherwise they can’t make payments,” he said.

Russia and Ukraine accounted for more than $1 billion in Turkish exports of leather shoes, jackets and finished and unfinished clothing last year, and nearly three times that much in the unofficial “suitcase trade” centred in Istanbul, officials say.

The hit to trade puts further pressure on Turkey’s economy after a currency crisis in December and resulting inflationary spiral. Falling export income adds to the Turkish current account deficit, which is swelling following Russia’s invasion of Ukraine last week due to soaring energy prices and an expected hit to tourism this year.

After a raft of orders and contracts with Kyiv and Moscow in February, “we face cancellations… worth around $200 million so far (for the industry),” said Seref Fayat, head of garment maker TOBB Clothing and Apparel Industry Assembly. “It could exceed $1 billion if this situation continues.”

Turkish trade with Belarus, Moldova and Romania has also cooled due to uncertainty, industry heads told Reuters. Some Polish customers asked to suspend orders, while some Russians asked to make payments based on foreign-exchange rates prior to the invasion and the collapse of the rouble.

The estimated $3 billion “suitcase trade” – in which small merchants from Russia, Ukraine and other former Soviet states buy goods in Istanbul, pack them in empty suitcases and resell them back home – has also taken a hit.

“We had already started manufacturing for the new season – but now we have all stopped,” said Giyasettin Eyyupkoca, head of the Association of Industrialists and Business People of Laleli, the Istanbul district at the centre of the suitcase trade.

Turkish President Tayyip Erdogan’s unorthodox economic plan aims to stabilise the lira currency by balancing the current account deficit. But given the Ukraine conflict, Goldman Sachs revised its forecast for this year’s deficit from 1.5% of GDP to 2.5%.

Russians and Ukrainians drive half of Laleli’s annual trade volume, Eyyupkoca said. “I have had the same Ukrainian trading partner for years and an open account with him. How can I now ask him to pay me money while he is struggling to stay alive?” 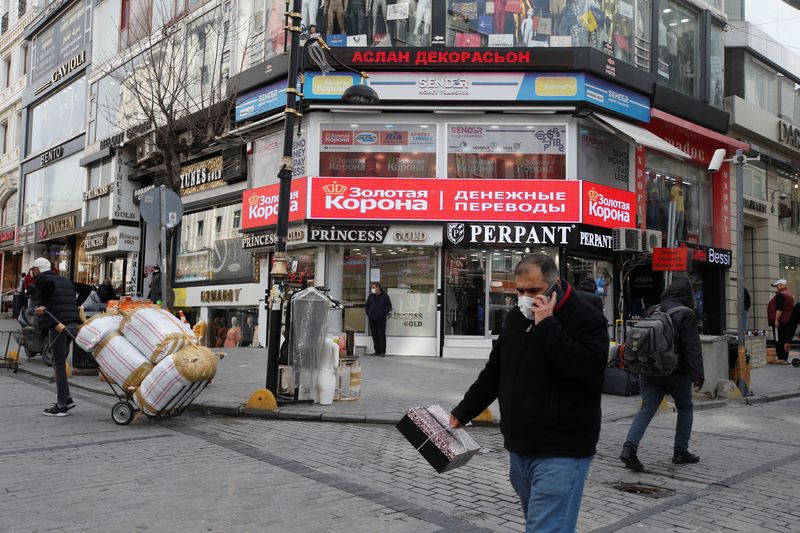