RIYADH – Russia’s invasion of Ukraine has catapulted defence spending up the political agenda in Europe and could herald a new era of purchases led by Germany, according to weapons makers gathering at an arms fair in Saudi Arabia this week.

The World Defense Show, where Europe’s Airbus, MBDA and Leonardo are exhibiting alongside nearly 600 other weapons makers, is taking place amid the largest assault on an European state in 70 years.

The conflict has reignited interest in security issues after years of European defence spending cuts and fatigue following NATO failures in Afghanistan.

Germany, which has long played down the role of its military in foreign policy, Denmark and Poland have all said they will ramp up defence spending with war at their doorstep.

“There was peace for decades and people thought there would be peace forever. Unfortunately, that assumption has been proven wrong,” Hristo Ibouchev, the executive director of Bulgarian firearms and munitions maker Arsenal, told Reuters.

German Chancellor Olaf Scholz has said Berlin could buy F-35 stealth warplanes from the United States, but also that future advanced weaponry would be purchased from European consortia.

The German budget this year will allocate 100 billion euros ($109 billion) for a one-time increase in defence spending, Scholz said on Feb. 27, which is more than double the entire 2021 defence bill of 47 billion euros.

“The German announcement alone is a new era of defence spending for the EU if it’s followed through on,” manager of Jane’s Defence Budgets Andrew MacDonald told Reuters, predicting such a major cultural shift would likely see others follow suit.


Some executives were sceptical of any dramatic increase, bemoaning what they see as years of sluggish investment and predicting states would not follow through on new commitments.

Others argued EU states, after years of Russian aggression like the 2014 annexation of Crimea, were already paying more attention to security and this war would just ramp plans up.

Russia calls its actions in Ukraine a special operation.

“The defence role is changing dramatically,” an European executive said, predicting higher spending not only because of the war but also because former U.S. President Donald Trump’s “American First” policy underscored the need for self-reliance.

At the fair, Russia’s weapons makers displayed precision guided missiles and artillery like those used by its forces besieging Ukrainian cities.

Russian executives declined to comment on whether their firms could still be paid for exports amid Western sanctions on banks and other businesses aimed at crippling Russia’s economy.

Western executives said the sanctions would make it difficult for Russian firms to be paid, but not impossible.

Elsewhere, armoured vehicles and other weaponry at a near-empty Ukrainian booth will be sent back as soon as the trade show finishes to be used in the conflict. 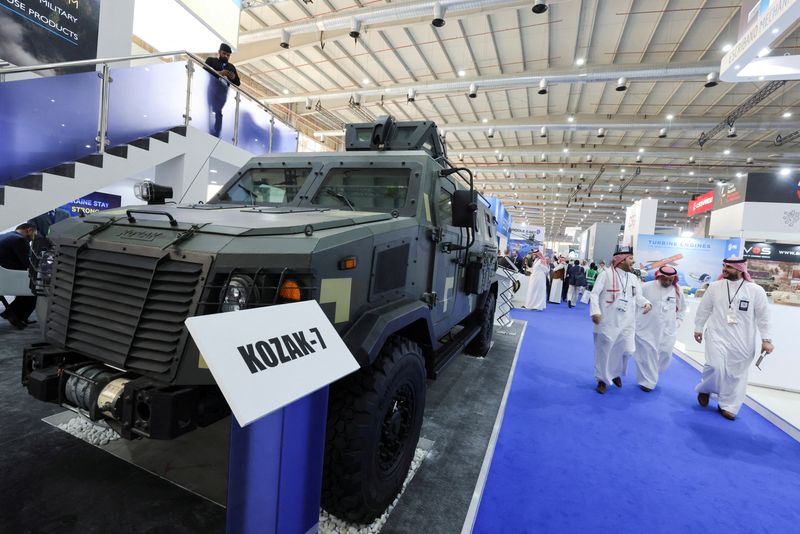