WASHINGTON – A Texas man who joined the Jan. 6, 2021, assault on the U.S. Capitol by supporters of former President Donald Trump was found guilty for his role in the attack on Tuesday, a milestone victory for federal prosecutors in the first such case to go before a jury.

The defendant, Guy Reffitt, was found guilty on all five of the felony charges he faced, including bringing a gun onto the Capitol grounds and obstructing an official proceeding.

Reffitt’s trial was seen as an important test case as the U.S. Justice Department attempts to secure convictions from the hundreds of defendants who have not taken plea deals.

The federal jury in Washington returned the unanimous verdict after just two hours of deliberation.

Reffitt, who is currently in custody, will learn the length of his prison sentence at a court hearing scheduled for June 8. Reffitt faces up to 20 years in prison, although defendants rarely get the maximum sentence.

Reffitt never entered the Capitol, but video showed him egging on the crowd and leading other rioters up a set of stairs outside the building.

Reffitt, who wore a bulletproof vest and a helmet, persisted up the staircase even as police officers pelted him with pepper balls and doused him with chemical spray.

In a video clip played for jurors, Reffitt repeatedly urged rioters to drag House of Representatives Speaker Nancy Pelosi and other lawmakers out of the Capitol building.


“I didn’t come here to play — I’m taking the Capitol,” the video showed Reffitt saying at one point. “I just want to see Pelosi’s head hitting every stair on the way out.”

Prosecutors also accused Reffitt, 49, of threatening his teenage children with harm if they turned him into authorities after the attack.

Reffitt’s estranged son Jackson, now 19, turned his father into the FBI and testified against him during the week-long trial. “He said, ‘If you turn me in, you’re a traitor,'” Jackson Reffitt told jurors during his testimony. “‘And traitors get shot.'”

Some 200 defendants have already pleaded guilty to charges relating to the attack, which sent lawmakers running for their lives. Reffitt’s trial was seen as an important test case as the U.S. Justice Department attempts to secure convictions from the hundreds of defendants who have not taken plea deals.

They face charges ranging from unlawful picketing to seditious conspiracy, with which 11 people affiliated with the right-wing Oath Keepers were charged in January.

Thousands of people stormed the Capitol on Jan. 6, 2021, after a fiery speech in which Trump falsely claimed his election defeat was the result of widespread fraud, an assertion rejected by multiple courts, state election officials and members of his own administration. 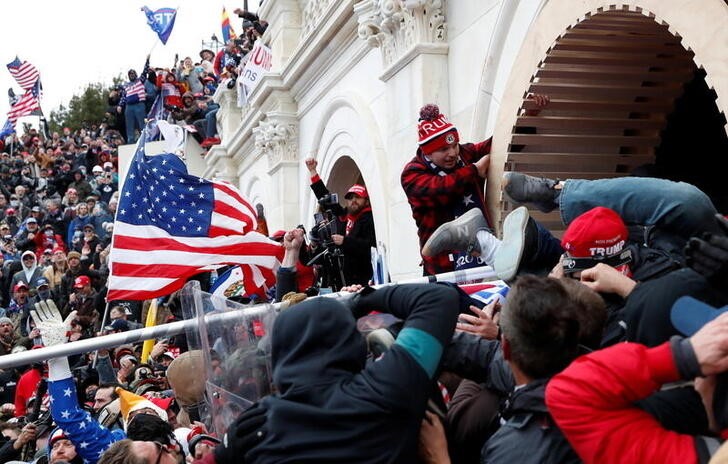