WARSAW – U.S. Vice President Kamala Harris will meet Polish leaders in Warsaw on Thursday amid disagreements with the eastern European country over how to arm Ukraine with warplanes to fight Russia’s invasion.

The United States on Tuesday rejected a surprise offer by Poland to transfer its Russian-made MiG-29 fighter jets to a U.S. base in Germany and put them at the disposal of the United States as a way to replenish Ukraine’s air force.

Poland’s prime minister, Mateusz Morawiecki, said any supply of fighter jets to Ukraine must be done jointly https://www.reuters.com/world/europe/poland-only-ready-act-jets-ukraine-within-nato-framework-presidential-adviser-2022-03-09 by NATO countries. However, U.S. officials said they were caught off guard by the proposal and the Pentagon quickly deemed it untenable.

Ukrainian President Volodymyr Zelenskiy has been pleading for NATO to impose a no-fly zone or provide it with fighter jets. The United States and its allies are eager to help Ukraine but are wary of any step that might draw them into direct conflict with Russia.

The U.S. decision not to go ahead with the transfer was criticized by many Republican lawmakers.

“The president should explain exactly why he vetoed fighter jets for Ukraine,” Senator Ben Sasse said.

“Two days ago, the secretary of state gave a green light to MiG transfers but now the Department of Defense is raising red flags — what’s going on?”

White House Press Secretary Jen Psaki said U.S. ties with Poland remain strong and she doubted Harris would discuss the issue in a major way on her trip this week to Poland and Romania.

The countries, which are NATO’s easternmost members, have been anxious about increasing Russian aggression in the region. They share a border with Ukraine and thousands of refugees are crossing it.

During her visit, Harris is expected to discuss ways NATO members can implement the economic sanctions put in place and how they can stay aligned. She will also meet Ukrainian refugees in Poland and discuss humanitarian and security assistance to Ukraine and the region.

Poland has accepted https://www.reuters.com/world/europe/around-12-mln-ukrainians-have-fled-poland-since-invasion-border-guards-2022-03-08 more than 1.2 million people escaping Ukraine, while Romania has taken in https://www.reuters.com/world/europe/more-than-291000-ukrainians-fled-romania-since-russian-invasion-2022-03-08 about 291,081 people fleeing the Russian invasion. More than 2 million people have fled from Ukraine.

Harris will meet Morawiecki and Polish President Andrzej Sebastian Duda on Thursday. She will also meet Canadian Prime Minister Justin Trudeau, who has been in Europe this week meeting Ukraine allies.

(Reporting by Nandita Bose in Warsaw; Editing by Robert Birsel) 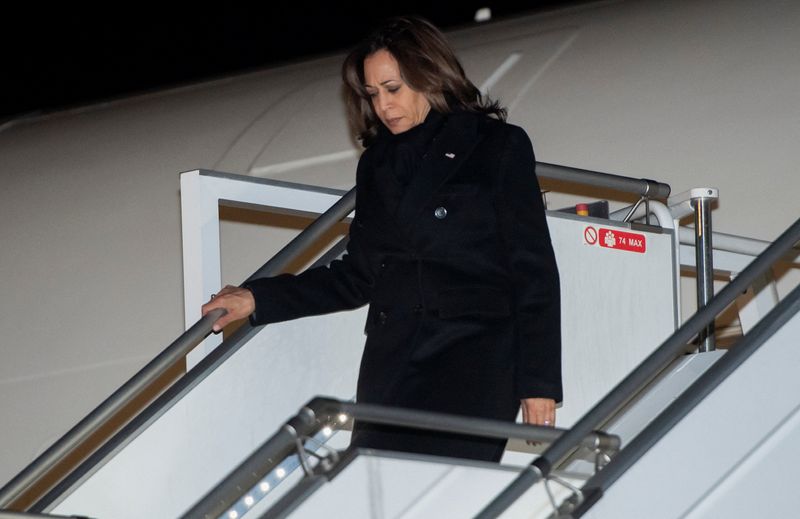