LONDON -Confiscating the assets of companies that have fled Russia since the invasion of Ukraine would shatter investor confidence for decades and take Russia back to the calamitous days of the 1917 Bolshevik revolution, metals magnate Vladimir Potanin has said.

Potanin, president and biggest shareholder of Norilsk Nickel, the world’s largest producer of palladium and refined nickel, said Russia should respond with pragmatism to its exclusion from swathes of the global economy.

“We should not try to ‘slam the door’ but endeavour to preserve Russia’s economic position in those markets which we spent so long cultivating,” Potanin, 61, said on the Telegram messaging app.

Potanin, one of the most prominent Russian billionaires who is not sanctioned by the West, said confiscating assets from companies that had left would put Russia out in the cold for decades, as far as investors were concerned:

“It would take us back 100 years to 1917. And the consequences – a global lack of confidence in Russia from investors – we would feel for many decades.”

Russia’s economy is facing the gravest crisis since the 1991 fall of the Soviet Union after the West imposed sweeping sanctions across Russia’s financial and corporate sectors following Moscow’s Feb. 24 invasion of Ukraine.

Prime Minister Mikhail Mishustin said on Thursday that the government proposed putting companies that had left Russia into external administration.

The exact mechanisms of that are unclear, though there is a fierce debate within the Russian elite about how severe Moscow’s reaction to Western sanctions should be, officials and businessmen said.

Putin said Russia would remain open for business and did not intend to close itself off from those who still wanted to do business.

But many do not – at least for now.

BP said last month it was abandoning its stake in Russian oil producer Rosneft while companies ranging from McDonald’s and Coca-Cola Co to Toyota and IKEA have shuttered their businesses in Russia.

‘WE MUST BE WISER’

Potanin’s upbringing as the son of a high-ranking Soviet trade official and an education at Moscow’s elite diplomatic academy have always set him slightly apart from other oligarchs who rose from rags to riches in the chaos of the 1990s.

The privatisation deals under President Boris Yeltsin gave Potanin and other oligarchs control over some of the best assets of a former superpower, though their clout was eroded under Putin as a new group of former spies put some of Russia’s biggest oil production units under state control.

Besides being the world’s largest producer of palladium and high-grade nickel, MMC Norilsk Nickel is a major producer of platinum and copper. It also produces cobalt, rhodium, silver, gold, iridium, ruthenium, selenium, tellurium and sulphur.

Potanin said some countries used sanctions as a way to edge out competition, urging Moscow to consider its moves carefully.

He also urged Moscow to remove restrictions on servicing Russia’s foreign currency debt, which he said totalled $480 billion. He said a technical default on interest payments could trigger demands for the full principal to be paid.

“This fully applies to major public companies,” Potanin said. Russia said on Sunday that sovereign bond payments will depend on sanctions.

“We see that the West’s own economies have suffered by imposing sanctions against Russia. So we must be wiser and avoid a scenario under which our sanctions hit us,” Potanin said.

Putin says the “special military operation” in Ukraine is essential to ensure Russian security after NATO admitted members up to Russia’s borders and Western countries supported pro-Western leaders in Kyiv.

Ukraine says it is fighting for its existence and the United States and its European and Asian allies have condemned the Russian invasion. China has called for calm. 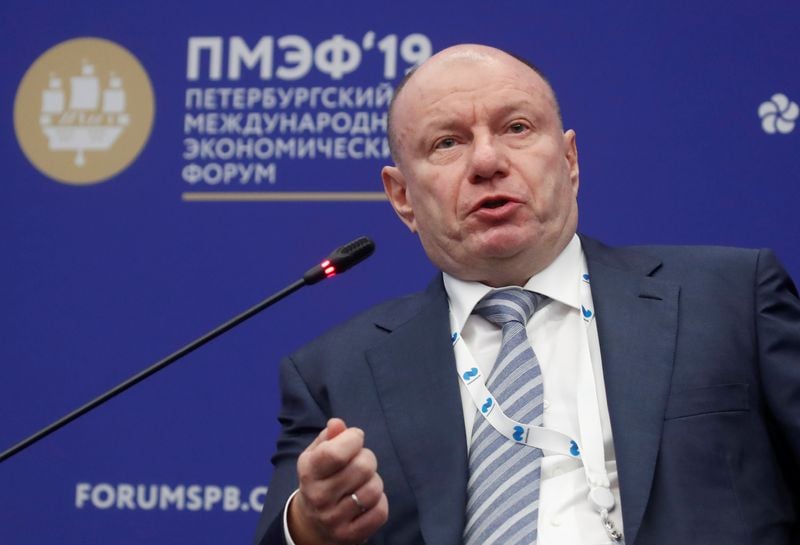