-European shares marked their biggest weekly gain this year, as signals from Russian President Vladimir Putin about a positive shift in talks with Ukraine helped markets end a volatile week on a firmer footing on Friday.

The pan-European STOXX 600 index closed 1% higher, and snapped three weeks of losses, adding 4% on the week as stellar gains for beaten down stocks outweighed declines from worries over the fallout from the ongoing Russia-Ukraine war.

Putin said on Friday there had been some progress and “positive shifts” in Moscow’s talks with Ukraine, without elaborating, immediately lifting investor sentiment.

“Investors might find that trying to build a rally on comments from Vladimir Putin is a bit of a fool’s errand, but that has been the theme of the day,” said Chris Beauchamp, chief market analyst at online trading platform IG.

Britain’s FTSE rose 0.8%, bolstered by data that showed a strong rebound in the economy. [.L]

“So any sort of positive news gives a sharp reversal because there’s already quite a lot of bad news priced in,” he said, but warned that markets are not fully pricing in second round effects such as the cutting off of important exports from Ukraine like agricultural exports.

The European Central Bank on Thursday paved the way for an interest rate hike as soaring inflation outweighed concerns about the fallout from Russia’s invasion of Ukraine.

Euro zone banks recovered 4.5% this week, posting their best week in two months, after dropping nearly 19% last week due to their large exposure to Russia.

Investors stampeded out of European equities at their fastest pace on record, the Bank of America said in a weekly report, with investors pulling out $13.5 billion from European stocks as the war forced investors to seek shelter in safe-haven assets such as gold and cash.

Goldman Sachs downgraded its 2022 euro area growth forecast on Thursday to 2.5% from 3.9%, citing risks of further escalation in the Russia-Ukraine crisis.

Among individual stocks, Tod’s gained 7.6% as the Italian fashion group expressed optimism for 2022, while EssilorLuxottica added 2.9% after the luxury eyewear group reported its best quarter of 2021. 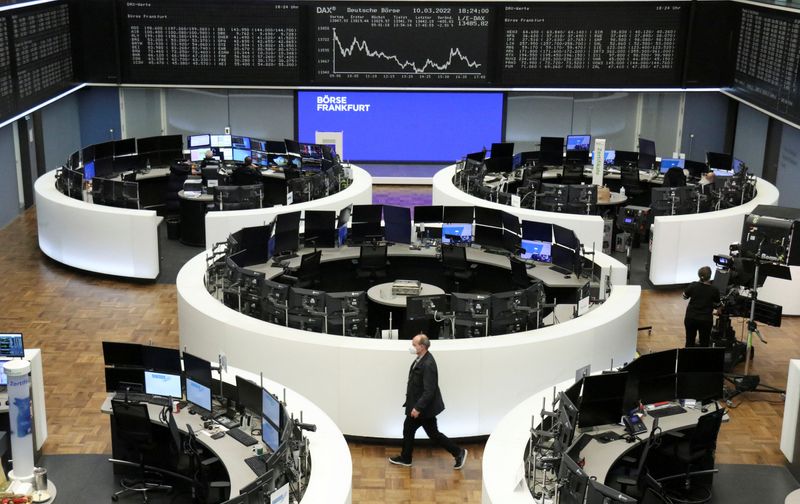 ONGC inks agreement with ExxonMobil for deepwater exploration in India

ONGC inks agreement with ExxonMobil for deepwater exploration in India