– Right-wing activist and Idaho gubernatorial candidate Ammon Bundy was arrested on Saturday on a trespassing charge for refusing to leave a hospital where an infant was taken into protective custody from his parents in a child-welfare case, police said.

Bundy’s campaign said on Twitter that he had gone to the hospital in Meridian, Idaho, about 10 miles (15 km) west of the state capital Boise, in support of a family whose baby boy “had been medically kidnapped.”

The campaign tweet said Bundy was arrested “for the crime of disagreeing with the hospital and CPS (child protective services),” adding, “this was an ambush arrest with no legal grounds.”

Bundy and members of his family have become widely known for leading armed standoffs against federal authorities, most notably in a 41-day takeover of the Malheur National Wildlife Refuge in Oregon in 2016 that left one of the occupiers dead.

Bundy, a brother and others were later acquitted of federal conspiracy charges stemming from the Malheur siege.

In a personal tweet, Bundy, 46, described the child as the grandson of a close friend, and said authorities took the baby because “a medical practitioner called CPS for a missed doctor appointment.”

“If this happened to them, it could happen to you,” Bundy wrote. “We must stand against this medical tyranny.”

Police said the 10-month-old child was first hospitalized on March 1 after medical personnel determined the baby was severely malnourished. The infant was released to his parents a few days later after gaining sufficient weight, police said.

But a subsequent checkup found the child again had lost significant weight, and police were contacted when the parents canceled their follow-up appointment and could not be located, the Meridian police department said in a statement.

Advised that the child’s condition was life-threatening, police sought to contact the parents, but the family proved uncooperative and evaded further attempts to check on the child’s wellbeing, police said.

After a warrant was obtained, police located the father and child in a traffic stop, took the infant into custody and brought the baby to the hospital for additional medical care.

Bundy was arrested on a misdemeanor trespassing count after he and several followers showed up at the hospital “and refused to leave the property when asked to do so,” police said.

A woman accused of interfering was also arrested, as were two other adults charged with interfering with police at the scene of the traffic stop, according to police.

Bundy, who has led a number of protests against COVID-19 public health restrictions in Idaho, announced his bid for the Republican nomination for governor in June. 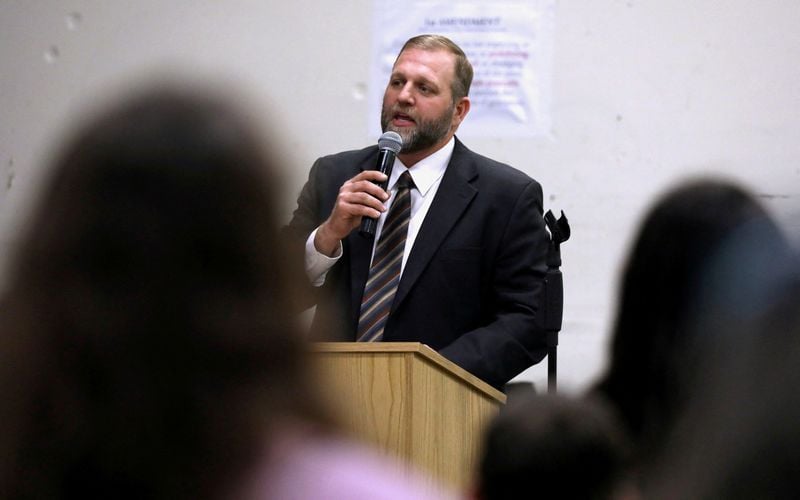