By Alexander Schummer and Fergal Smith

TORONTO – As Russia’s invasion of Ukraine disrupts the global economy and drives up oil, gold and industrial metal prices, investors are embracing Canada’s commodity-linked stock market to protect their portfolios from the impact of supply shortages and soaring inflation.

Financial markets globally have been rattled in recent months by rising inflation as economies recover from the coronavirus pandemic, with matters made worse by the spike in commodity prices after sanctions against Russia, the world’s top wheat exporter and second-biggest oil exporter.

Canada offers a hedge of sorts. It produces many of the energy, metal and agricultural products in short supply, while its main stock index, the S&P/TSX Composite, has a 27% weighting in energy and materials, indicating that the earnings of a large chunk of the market are directly tied to rising commodity prices.

Inflation-linked bonds are a more conventional hedge for investors fearing price spikes, but some prefer to maintain exposure to equity markets.

“The TSX is a preferential allocation within global equities, given the relatively cheap valuation still and the more muted macro economic impact of the war on the Canadian economy,” said Kurt Reiman, senior investment strategist for North America at BlackRock.

The Toronto market is one of the few major indexes globally that is in positive territory since the start of the year, having advanced 0.5%, compared to a decline of 11.3% for the S&P 500 index, the U.S. equities benchmark.

At 14.6, the 12-month forward price-earnings multiple for the TSX is slightly below its average for the last 10 years, data from Refinitiv Datastream shows, and well below the S&P 500’s multiple of about 18.5.


Foreign investors have taken notice, plowing a net C$46 billion ($36 billion) into Canadian equities last year, the most since 2016, according to data from Statistics Canada.

Among the companies that investors favor are copper miner Hudbay Minerals Inc, which trades at a forward price-to-book ratio of 1.24 versus the industry average of 1.61, Refinitiv data shows.

Its valuation should play catch-up as the company has “laid the groundwork” for growth, said Michael Sprung, president at Sprung Investment Management.

Paul Gardner, a portfolio manager at Avenue Investment Management, says the gold sector is “generally cheap” relative to the price of bullion. He sees Agnico Eagle Mines Ltd as a long-term buy and expects Canadian Natural Resources, the country’s biggest oil producer, to benefit from the rally in oil prices.

But it’s not just resource shares that help differentiate the Toronto market. It’s also the market’s heavy weighting, at 31%, in financials.

Earlier this month, the Bank of Canada raised its key interest rate for the first time in three years and made clear that further hikes are on the way. The Federal Reserve is expected to announce a lift-off in U.S. rates on Wednesday.

Adding to the attraction of financial and energy shares in the current environment are high dividend payouts compared to some other sectors such as technology.


“When there are concerns about global growth, the dividend starts to become more important,” BlackRock’s Reiman said. “You tend to see Canadian stocks delivering because of that sector exposure.” 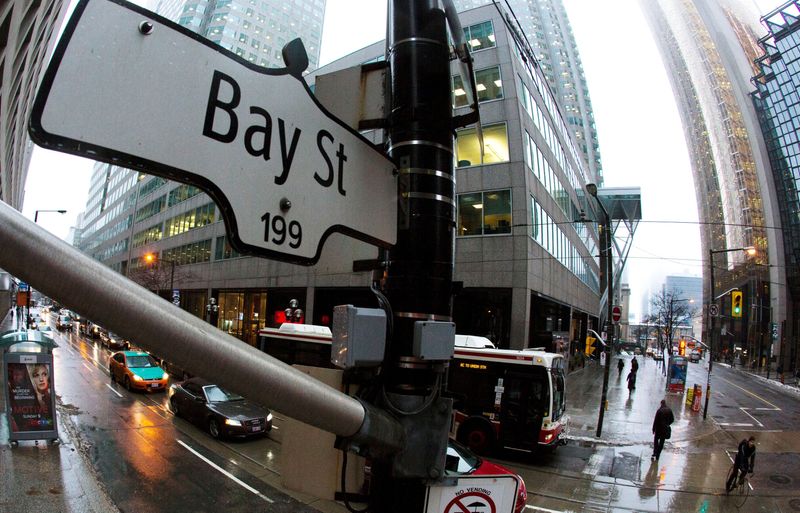