NEW YORK – Do you believe in Cathie Wood?

Wall Street’s star stock picker has seen her fortunes wane over the past year as her flagship tech innovation fund slid more than 50%, losing $13 billion in market value.

Yet investors have continued to buy into her futuristic vision, according to data from industry tracker Lipper: not only holding tight but plowing more than $2 billion in additional net inflows into the fund at her firm ARK, a name inspired by the Ark of the Covenant, a Biblical vessel of divine revelation.

“People like to bet on somebody and look someone in their face and see their conviction,” said Tom Lydon, an asset management veteran. “That has helped override any concerns that this fund is broken.”

Wood, one of the few prominent female fund managers on Wall Street, is facing one of the greatest challenges of her professional career: how to show the world that she is simply more than the face of what some are calling the pandemic bubble.

While much has been written about the decline of her ARK Innovation exchange-traded fund, this story is the first to draw on a range of interviews, with about a dozen ARK employees, investors, and others within Wood’s world, to show how she is trying to keep her reputation intact as she navigates the flip side of fame.

Wood related to Lydon a recent conversation she had with an angry client who had millions invested with her fund and was prepared to pull it all out. She listened to their concerns without interrupting. Finally, it was her turn to speak.

“We have the same commitment to our strategy that we did at the market top, and if you liked it back then you should love it even more because valuations have become more attractive,” she told the client from her office high above the palm trees of St. Petersburg, Florida, where she recently moved from New York.

By the end of the conversation, she had not only persuaded him to keep his money invested with her, but to add more to keep his overall allocation to her fund the same.

Stirring the belief of seasoned investors may never be more critical for Wood.

In the space of three years she rose from relative obscurity to being hailed as one of America’s greatest stock oracles in 2020 after she made gains of about 150% by piling into shares such as Tesla and Zoom Video Communications before they hit the stratosphere.

Yet inflation soon began to sap the life out of the highly valued tech disruptor stocks she’s famed for. From there, gravity seemed to take over, pulling the fund lower and lower last year despite a 20%-plus gain in the broad S&P 500. With the Russian invasion of Ukraine compounding losses, Wood’s flagship fund is now down nearly 63% from its February 2021 high.

While Wood declined to be interviewed for this article, those close to her say she is fielding multiple calls a day from financial advisers and investors to convince them to stick with her.

At the same time, she is making a conscious drive to appear in more public forums, such as TV interviews and conferences, in order to bolster the confidence of retail investors who make up a significant portion of her fund base.

Her conviction does not waiver in private, said Robby Greengold, an analyst at investment research firm Morningstar who regularly speaks with her. “She doesn’t present herself any differently in person than in public,” he added.

Wood, a prominent backer of bitcoin, believes technology is advancing at a more rapid pace than many investors realize and will cleave a handful of winners away from a growing trash pile of companies on the losing side of disruption.

Not everyone has faith, though. Not by a long shot.

In fact, a lack of confidence in Wood’s long-term prospects led Tuttle Capital to launch an ETF that solely shorts her positions – the first known time that an ETF has specifically shorted the strategy of a single active manager.

“We wanted to short speculative technology and, lucky for us, ARK had already designed that package,” said Matthew Tuttle, the head of Tuttle Management, whose fund has swelled to $350 million in assets and is up about 90% since it began trading in November.

More broadly, short-sellers of ARK funds are up $712 million this year through Feb. 16, marked against market prices, a gain that puts them up 22.16% for the year versus a 5.2% gain for shorting the entire domestic ETF market, according to technology and data analytics company S3 Partners.

On Reddit’s WallStreetBets forum, which helped power the retail pandemic trading frenzy of “meme” stocks, a recent discussion is entitled “What’s the Consensus on Cathie Wood”.

“She literally took all of the bubble stocks, put them into an ETF, and just expected the bubble to just keep skyrocketing,” one post says.

A DAY IN THE LIFE

The interviews with the people close to 66-year-old Wood offer a window upon a day in the life of the celebrated stock picker.

7 a.m: She begins work at her office in a 26-storey tower just a few blocks away from the shimmering waters of Tampa Bay, often listening to earnings calls of companies in her portfolio and potential acquisitions.

8:45 a.m: she joins a call with her analyst team. On Friday mornings, she also holds a two-hour video meeting with her analysts and industry experts on how technology will drive societal change that she occasionally opens to select investors.

The rest of the day is spent on calls with clients, trading decisions, and increasingly frequent media appearances, whether in the form of a nearly 45-minute grilling of her positions on CNBC or the firm’s own YouTube shows and webinars.

“She is more than willing to speak with any client that’s out there to walk through what is happening in the market and just reassure them this is an opportunity,” said Renato Leggi, a client portfolio manager at ARK.

Wood might not need to convince her roughly 45-person staff at ARK Invest, where belief in her remains as powerful as the Florida sunshine.

“People follow and are willing to give their life or entrust in her because of her humility,” said Alex Cahana, a theme developer at ARK since 2014, helping identify the industry trends that could shape ARK’s investment strategy.

Her conviction in the face of piling losses appears to be resonating with investors.

This year alone, they have entrusted more than half a billion dollars in net inflows to her innovation fund, despite it turning in one of the worst performances of all funds tracked by Morningstar over the same time.

Despite its recent losses, the fund has returned an annualised average of 27.5% over the last three years, putting it in the top 2% of the 491 U.S. mid-cap growth funds tracked by Morningstar. That said, many investors who weren’t there from the early days are now underwater.

The fund’s long-term track record is one reason to believe in Wood once inflation subsides, said Jimmy Lee, the head of Las Vegas-based Wealth Consulting Group, which has $2 billion in overall assets under management.

He said his group had added to its ARK investment in recent weeks: “A lot of their names purchased in the past were way too rich in valuation, but now we’re at a good entry point.”

‘GO WHERE YOU NEED TO GO’

Woods, who has a deep-seated Christian faith, shot to finance fame relatively late in life after starting her career in 1980 at New York-based investment advisory firm Jennison Associates. She founded ARK in 2014 after other stints at Tupelo Capital Services and AllianceBernstein.

While the sort of broad, thematic bets that are a hallmark of ARK’s investment style has long been a part of her strategy, her willingness to take large positions – approximately 30% of her flagship fund is invested in the shares of five companies – has not always been welcomed at previous firms where she worked.

While she was chief investment officer of thematic portfolios at AllianceBernstein, the firm began to implement new constraints on how she could manage her fund following the market meltdown in 2008, adding limits on position sizes and requiring more sector diversification.

Frustrated, Wood pitched the idea of a transparent, actively managed ETF to AllianceBernstein in 2013 but was refused, said Leggi. She left the firm and formed ARK Invest the following year.

“You can’t really run a constrained portfolio across innovation. You need to be able to go where you need to go when you want to,” Leggi said.

Wood’s ability to retain investors despite large losses could be a sign that her fund won’t become the pandemic version of the Munder NetNet fund, which soared to more than $11.5 billion in assets in the late 1990s thanks to bets on internet stocks, before falling over 90% once the dotcom bubble burst. Its once-celebrated portfolio manager, Paul Cook, left Wall Street and now works at a human resources software company.

Todd Rosenbluth, head of ETF research at CFRA, said he admired Wood and ARK’s ability to retain their appeal after a torrid year.

“Performance-chasing is much more common than investors demonstrating loyalty in the face of underperformance,” he added. “It is a credit to the shareholder base ARK has built.” 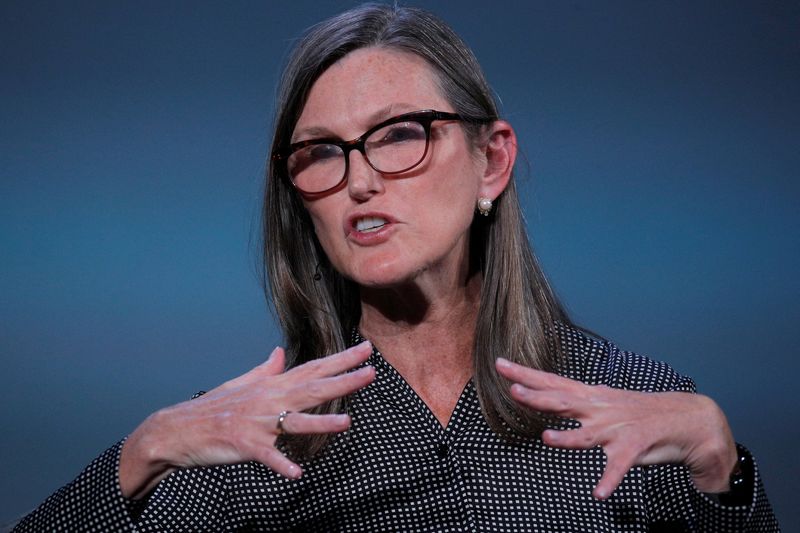