WASHINGTON – A convoy of trucks attempted to bring a weeks-long, cross-country protest against COVID-19 mandates into Washington, D.C., on Monday, but police blocked numerous bridges, highway exits and city streets, preventing many of the vehicles from entering the heart of the nation’s capital.

It was the first time the protesters sought to enter the city since the convoy arrived in the area earlier this month. The procession started out in California in February.

Before Monday, the trucks, which were joined by protesters in cars and recreational vehicles, remained on the Beltway, a 64-mile (103 km) highway that encircles the city, driving slowly to draw attention to their cause.

Officials on Monday warned of traffic delays on three major interstates in the capital region due to the closures.

A traffic camera mounted near the 14th Street Bridge over the Potomac River showed dozens of big rigs backed up on Interstate 395 near the Pentagon as police denied access. Many of the drivers were blaring their air horns as traffic snarled.

While many trucks were blocked, some apparently made it into the city, according to live streams posted on social media.

Leaders of the convoy, inspired by demonstrations last month that paralyzed Canada’s capital city of Ottawa, are calling for an end to all pandemic-related restrictions. The movement attracted participants from around the country who were angry about vaccination requirements for health, government and military employees.

It has also drawn support from Republicans such as U.S. Senator Ted Cruz of Texas and Senator Ron Johnson of Wisconsin.

The protest against vaccine requirements and other pandemic restrictions has been undercut in recent weeks, with many U.S. cities rolling back mask mandates and other measures as infections and hospitalizations decline sharply.

Before drivers made the roughly 80-mile trip to Washington on Monday morning, hundreds of vehicles gathered at the Hagerstown Speedway racetrack in Maryland.

The group had planned to stage a protest on Washington’s National Mall but it withdrew its application for a permit when the National Park Service would not grant its requested dates, according to the Washington Post.

A representative of the National Park Service did not immediately respond to a request for comment. 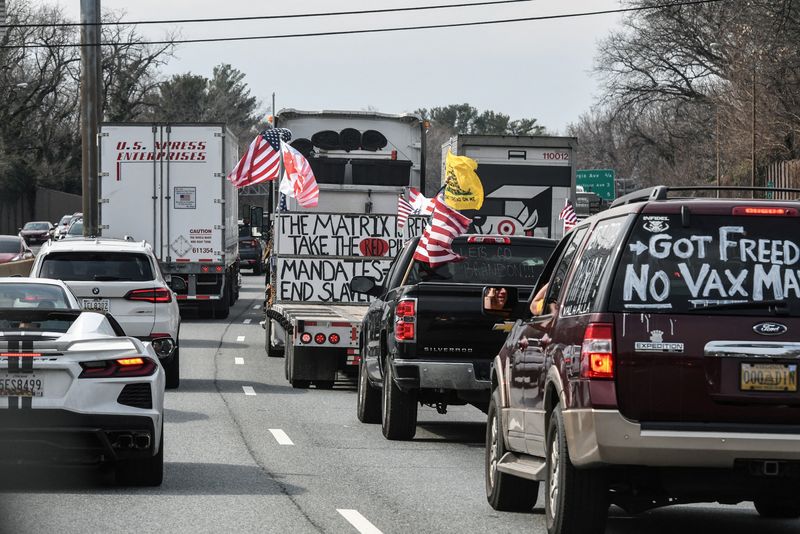 Antisemitism Been Politically Weaponized and Cheapened in Ocean County

Antisemitism Been Politically Weaponized and Cheapened in Ocean County