By Pavel Polityuk and Natalia Zinets

LVIV, Ukraine – The United States warned China after “intense” talks on Monday against helping Moscow in its invasion of Ukraine, while an anti-war protester interrupted Russian state TV news in an extraordinary act of dissent.

Moscow has not captured any of the 10 biggest cities in Ukraine since beginning its incursion on Feb. 24, the most significant attack on a European state since World War Two.

It calls its actions a “special military operation” to “denazify” the country and has asked for military and economic aid from Beijing, according to U.S. officials.

Moscow denies that, saying it has sufficient resources to fulfil all of its aims. China’s foreign ministry labelled the reports on assistance as “disinformation.”

“We have communicated very clearly to Beijing that we won’t stand by,” State Department spokesperson Ned Price told reporters on Monday. “We will not allow any country to compensate Russia for its losses.”

The seven-hour meeting was “intense” and reflected “the gravity of the moment,” according to a U.S. official.

The West is weighing how to deal with any involvement from China, top global exporter and No.1 foreign supplier of goods to Americans.

In Russia, a rare anti-war protest occurred in a studio during the main news programme on state TV’s Channel One, which is the primary source of news for millions of Russians and closely follows the Kremlin line.

A woman held up a sign in English and Russian that said: “NO WAR. Stop the war. Don’t believe propaganda. They are lying to you here.”

The protester could be seen and heard for several seconds before the channel switched to a different report so she was no longer visible.

Moscow on Monday allowed the first convoy to escape besieged Mariupol, home to the worst humanitarian crisis of the conflict.

But local authorities say as many as 2,500 civilians have died so far, a toll that cannot be independently confirmed.

Russia says it does not target civilians.

But Kyrylo Tymoshenko, a senior aide to Ukrainian President Volodymyr Zelenskiy, later said Russia had yet again blocked a humanitarian aid convoy trying to reach the city with supplies.

Obtaining safe passage for aid to reach Mariupol and civilians to get out has been Kyiv’s main demand at several rounds of talks. All previous attempts at a local ceasefire have failed.

The Ukrainian foreign ministry said a pregnant woman who was photographed being evacuated wounded from a maternity hospital in Mariupol bombed by Russia last week had since died along with her baby. Reuters was not able to verify this.

Despite video showing at least two pregnant women being carried out of the ruins, Russia has said the hospital was not used at the time and had been occupied by Ukrainian fighters.

Drone video footage released by Ukrainian forces in Mariupol showed a desolate wasteland of bombed out buildings, many in flames, with smoke pouring into the sky.

Britain’s defence ministry said in an intelligence update on Monday that Russia could be planning to use chemical or biological weapons in Ukraine in response to a staged fake attack on Russian troops, without citing evidence. U.S. officials have made similar statements.

Russia has accused Ukraine of planning to use biological weapons. The United Nations on Friday said it had no evidence Kyiv had such a program.

In the latest bid to ease the crisis, Russian and Ukrainian delegations held a fourth round of talks on Monday – by video link rather than in person – but no new progress was announced. Discussions were due to resume on Tuesday.

Russia “still has a delusion that 19 days of violence against (Ukrainian) peaceful cities is the right strategy”, said Ukrainian negotiator Mykhailo Podolyak.

Russian negotiator Vladimir Medinsky wrote on social media: “We’re aiming to do everything possible for the achievement of the goals set by Vladimir Putin, for Russia’s peaceful future.”

EU member states had agreed on a fourth package of sanctions against Russia, according to France.

Details were not officially disclosed, but diplomatic sources said they would include an import ban on Russian steel and iron, an export ban on luxury goods and a ban on investment in the energy sector.

Chelsea soccer team owner Roman Abramovich and 14 others would be added to the EU blacklist.

The war has caused a surge in commodity prices, threatening the global recovery as inflation in the developed world is already at its highest since the 1980s, many poor countries are facing a food crisis and the pandemic is still being felt.

Russia is the world’s biggest exporter of combined oil and gas, and Russia and Ukraine together supply nearly a third of the world’s grain exports, as well as metals and chemicals used worldwide in industry and agriculture.

Russia itself has been cast into economic isolation never before visited on such a big economy.

Its forces have been bearing down on Kyiv but have made little progress so far towards the capital itself, despite heavy fighting that has reduced suburbs on its outskirts to rubble.

In Kyiv itself, an apartment block was hit by a missile overnight, killing at least one person, officials said.

“The staircase was not there anymore, everything was on fire,” apartment resident Maksim Korovii said.

“We managed to put on whatever clothes we had at hand and made our way from balcony to balcony and in the end we climbed down by the next building’s entrance.”

In the south, where Russia has made more progress, residents of Odessa, a Black Sea port of 1 million people, fear their city could be next. They formed a human chain on Monday, singing patriotic songs as they carried sandbags from the beach.

In Donetsk, held since 2014 by Russian-backed separatists, Russia’s defence ministry said at least 20 people had been killed and 28 wounded by what it said was a Ukrainian missile with a cluster charge. It released footage of a missile on a busy street and vehicles destroyed by shrapnel.

Ukraine accused Russia or its allies of carrying out that attack themselves as a pretext: “It is unmistakably a Russian rocket or another munition,” Ukrainian military spokesman Leonid Matyukhin said. Reuters could not verify either account. 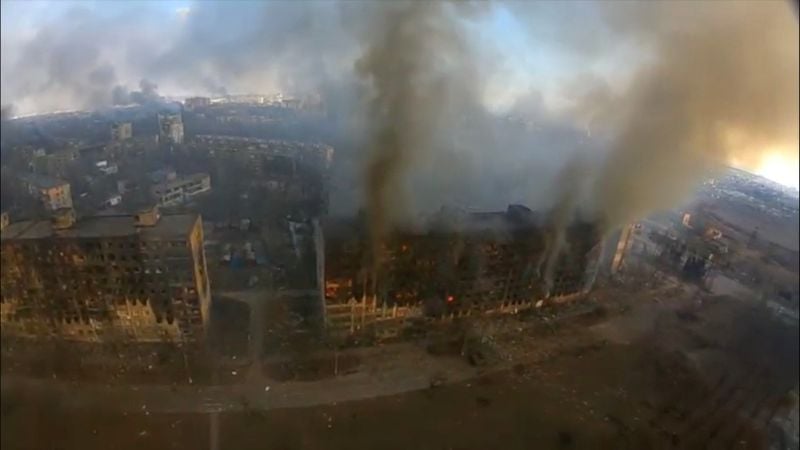 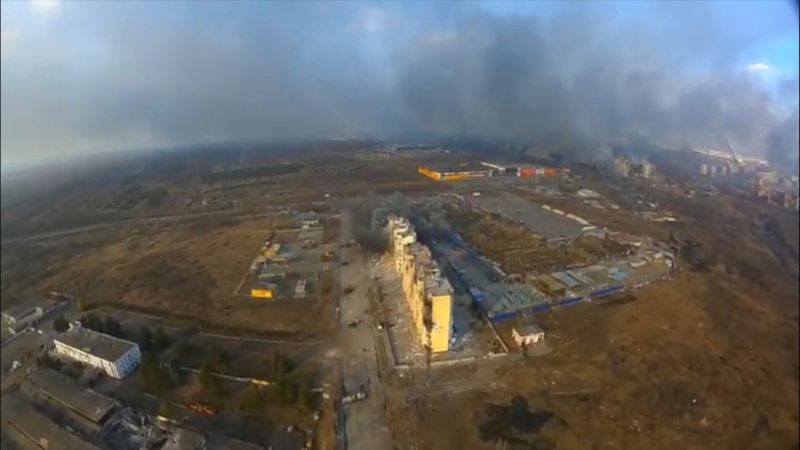 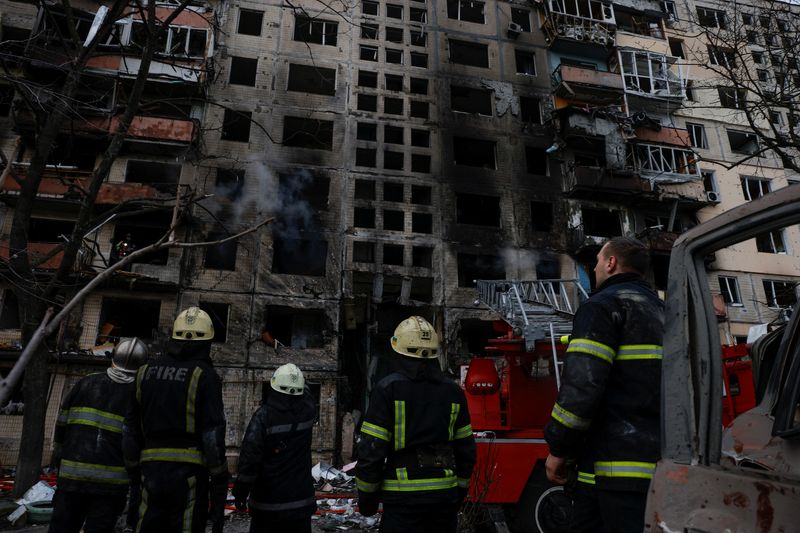 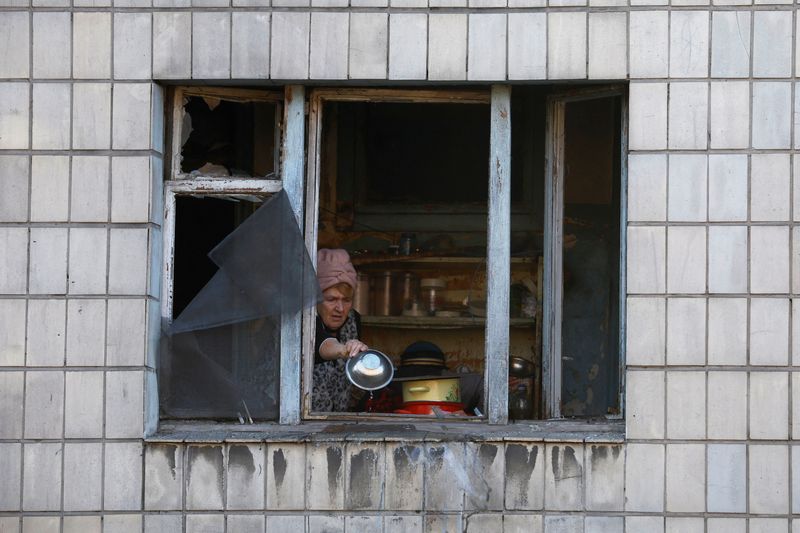 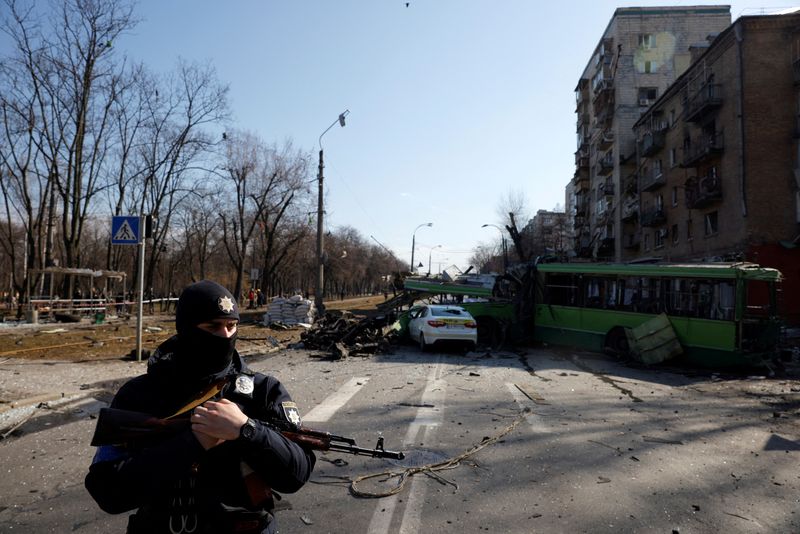 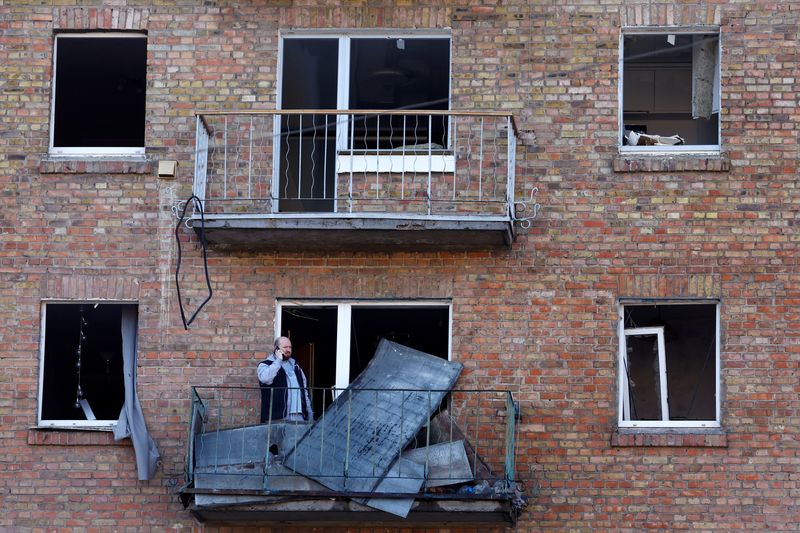 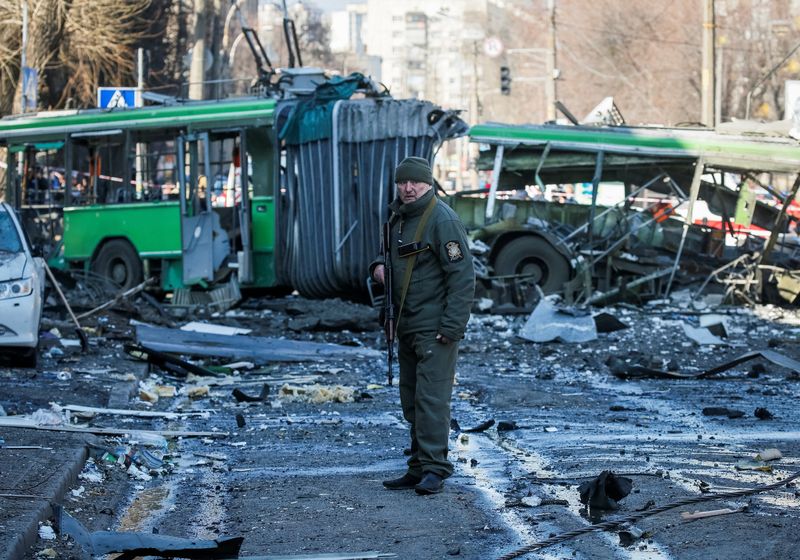 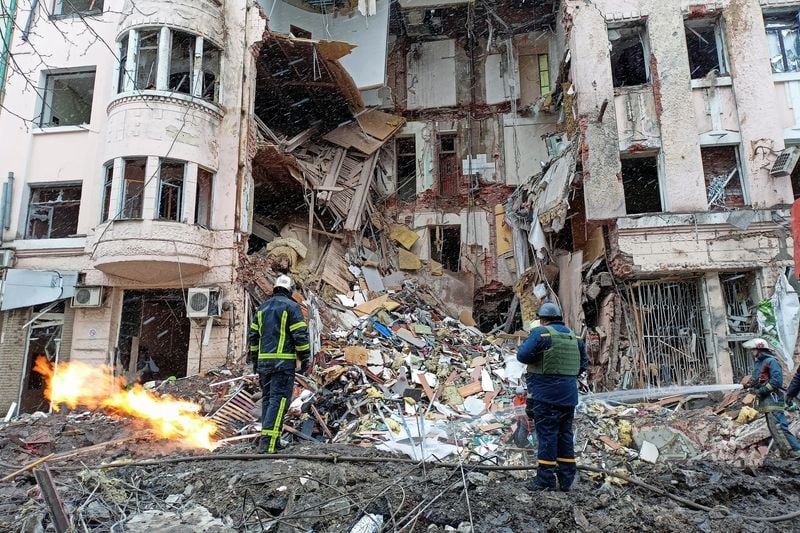 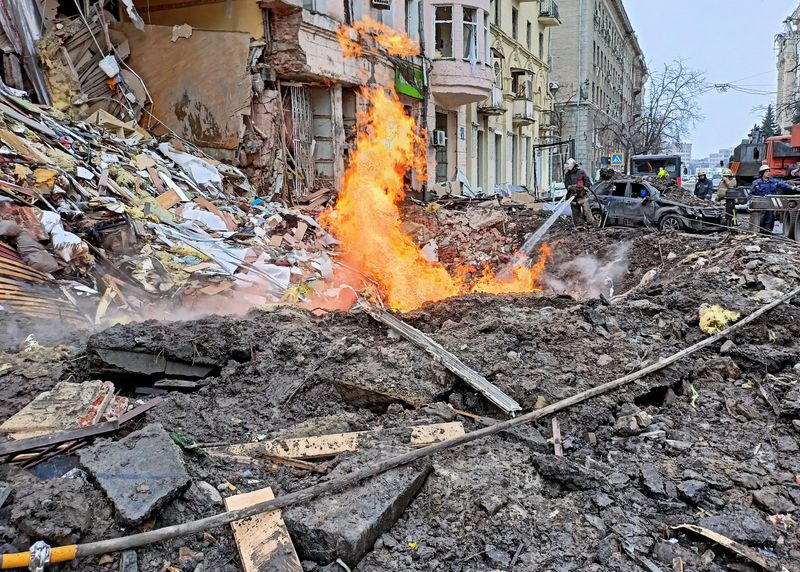 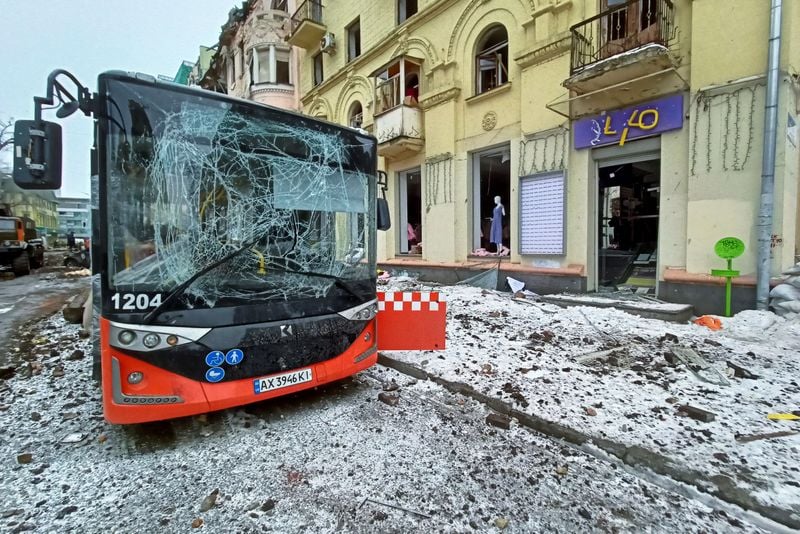 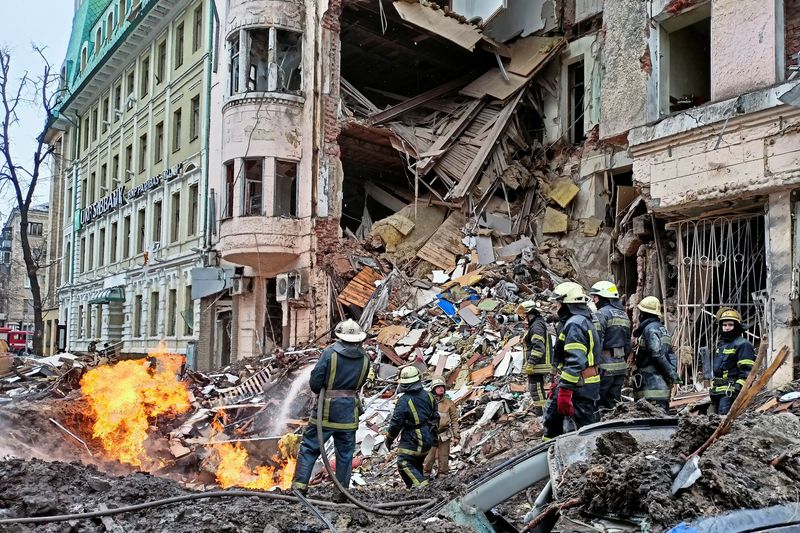 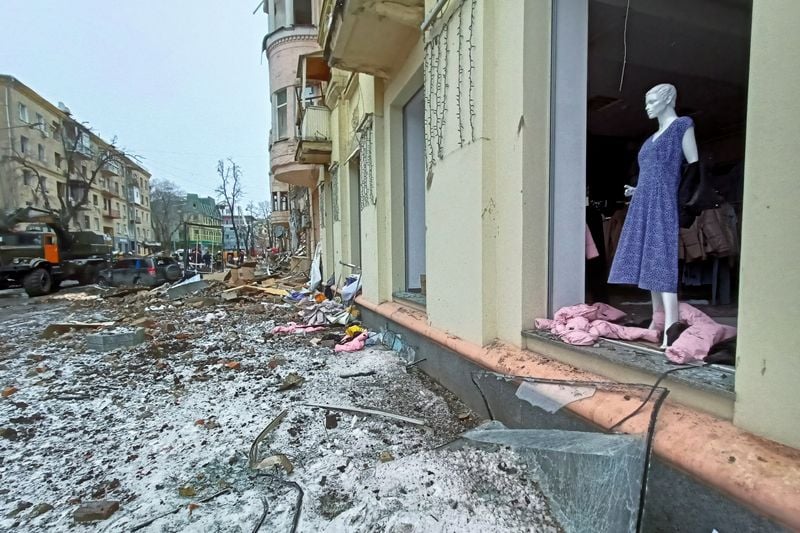