-European stocks fell on Tuesday, with commodity-linked sectors leading the losses, as concerns about surging coronavirus cases in China added to nerves ahead of a widely expected U.S. interest rate hike.

The pan-European STOXX 600 index fell 0.3%, after rising in the last two sessions when hopes of progress in Russia-Ukraine peace talks had lifted sentiment.

“Sectors exposed to China – basic materials, mining and metals, residential construction and luxury stocks – are moving partly on the restrictions put in place in some parts of China,” said Nick Nelson, a European equity strategist at UBS.

“It’s another thing for the markets to worry about in terms of impact on economic growth and demand for European companies selling into China.”

French luxury goods makers LVMH, which draws a major part of its revenue from China, dropped 1.5%, making it the biggest drag on the STOXX 600.

Dutch tech investor Prosus, which has a stake in China’s Tencent, fell 6.6%, hitting a record low, amid continued weakness in Chinese tech shares.

The Federal Reserve is widely expected to kick off a rate hiking cycle on Wednesday with a 25 basis point rise as market participants ramp up bets on how far U.S. rates might climb in the face of surging inflation.

The Bank of England is also set to hike borrowing costs on Thursday.

A survey showed German investor sentiment suffered a record slide in March due to the war in Ukraine and economic sanctions on Russia, with collapsing expectations making a recession in Europe’s largest economy “more and more likely”.

“The record drop in the euro-zone ZEW economic sentiment index in March, published today, highlights how much the war in Ukraine has unnerved investors,” said Jessica Hinds, Europe economist at Capital Economics.

However, Hinds says a recession at this stage is unlikely given that the relationship between the survey and GDP growth is not close.

Among other stocks, Sweden’s H&M, the world’s second-biggest fashion retailer, slipped 3.2% after reporting a rise in quarterly sales that was in line with expectations.

Tobacco and nicotine products maker Swedish Match slumped 4.2% after it said it had decided to pause plans to spin off and list its U.S. cigar business.

(Reporting by Sruthi Shankar in Bengaluru; Editing by Subhranshu Sahu) 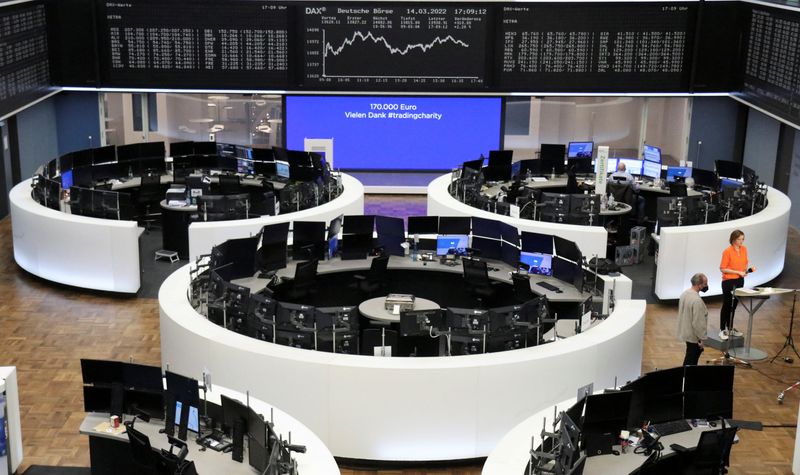