DUBAI/WASHINGTON -Russia said on Tuesday it has written guarantees it can carry out its work as a party to the Iran nuclear deal, suggesting Moscow could allow a revival of the tattered 2015 pact to go forward.

Russian Foreign Minister Sergei Lavrov’s comments appeared to signal Moscow may have backed off its previous view that Western sanctions imposed on Russia over its invasion of Ukraine were an impediment to salvaging the nuclear deal.

Lavrov on March 5 unexpectedly demanded sweeping guarantees that Russian trade with Iran would not be affected by the Ukraine-related sanctions – a demand Western powers have said was unacceptable and Washington has insisted it will not accept.

Under the deal, formally called the Joint Comprehensive Plan of Action (JCPOA), Iran agreed to limit its nuclear program to make it harder to develop a nuclear bomb – an ambition it denies – in return for relief from global economic sanctions.

“We have received written guarantees – they are included in the very text of the agreement on reviving the JCPOA, and in these texts there is a reliable defence of all the projects provided for by the JCPOA and those activities – including the linking up of our companies and specialists,” Lavrov said.

Speaking at a news conference with Iranian Foreign Minister Hossein Amirabdollahian in Moscow, Lavrov also denied that Russia was an obstacle to reviving the 2015 agreement.

“I have heard how the Americans have every day tried to accuse us of delaying the agreement – that is a lie. The agreement is not finally approved in several capitals, and the Russian capital – Moscow – is not one of them.”

Oil prices fell more than 6%, pulled down by Lavrov’s comments that Moscow was in favour of the nuclear deal resuming as soon as possible, and by doubts about Chinese demand following surging COVID-19 cases in China.

However, Western officials said they were not sure if Russia was satisfied by guarantees it could carry out nuclear projects under the 2015 deal or if it wanted a the “right to free and full trade, economic and investment cooperation and military-technical cooperation” with Iran that Lavrov sought on March 5.

U.S. State Department spokesman Ned Price told reporters a revival of the nuclear deal would not be “an escape hatch” for Russia to avoid sanctions imposed because of the Ukraine war.

“We of course would not sanction Russian participation in nuclear projects that are part of resuming full implementation of the JCPOA. We can’t and we won’t, and we have not provided assurances beyond that to Russia,” Price added.

Another U.S. official, who spoke on condition of anonymity, responded cautiously to Lavrov’s comments, saying they might mean Moscow had come around to the U.S. view that Russia’s invasion of Ukraine should not torpedo the Iran nuclear deal.

“Perhaps it is now clear to Moscow that, as we have said publicly, the new Russia-related sanctions are unrelated to the JCPOA and should not have any impact on its implementation,” said this senior U.S. State Department official.

Iran said the United States lacked the “political will” to resolve several outstanding issues in the nuclear negotiations in Vienna. The Islamic Republic has insisted Washington remove human rights and terrorism-related sanctions, including those imposed in 2019 on its elite Revolutionary Guards.

Amirabdollahian said the pause in the Vienna talks could help resolve several of the outstanding issues and suggested that Russia was no impediment.

“If we can reach an understanding with the United States on the few issues that are our red line and get to a final agreement, Russia will stand with us until the end of talks to reach a good, stable and strong nuclear deal,” he said.

(Reporting by Parisa Hafezi in Dubai and by Humeyra Pamuk and Simon Lewis in Washington; Additional reporting by Guy Faulconbridge in London and by John Irish in Paris; Writing by Arshad Mohammed, editing by Mark Heinrich and Grant McCool) 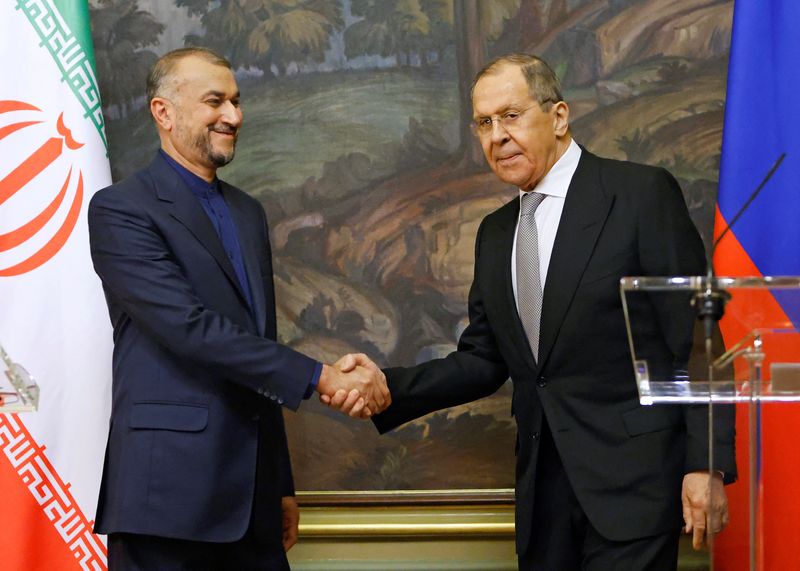