UNITED NATIONS -The U.N. Security Council is due to vote on Friday on a Russian-drafted call for aid access and civilian protection in Ukraine, but diplomats say the measure is set to fail because it does not push for an end to the fighting or withdrawal of Russian troops.

The draft resolution, seen by Reuters, also does not address accountability or acknowledge Russia’s invasion of its neighbor.

Britain’s U.N. Ambassador Barbara Woodward described these as “glaring omissions” in a video posted on Twitter on Tuesday and said Russia was “game playing.” She said Britain would not vote for Russia’s draft text.

“Their resolution calls for parties to respect international humanitarian law, but leaves out the fact that Russia is committing war crimes,” she said. “It is their invasion and their actions driving this unfolding humanitarian crisis.”

A Security Council resolution needs at least nine votes in favor and no vetoes by Russia, China, Britain, France or the United States to be adopted. Diplomats said the Russian move would fail because most of the 15 members would likely abstain.

“We are not going to lend credence to Russia’s effort to evade accountability, responsibility and culpability for their unprovoked aggression,” said Olivia Dalton, spokesperson for the U.S. mission to the United Nations.

Russia put forward the text after France and Mexico withdrew their own push for a council resolution on Ukraine’s humanitarian situation because they said it would have been vetoed by Moscow. They instead plan to put it to a vote in the 193-member General Assembly where no country wields a veto.

“We said from the very beginning that we would be prepared to adopt a humanitarian resolution on the situation in Ukraine, provided that this is not a disguise to blame and shame Russia again,” Russia’s U.N. envoy Vassily Nebenzia said on Tuesday.

The Russian-drafted Security Council resolution “demands that civilians, including humanitarian personnel and persons in vulnerable situations, including women and children are fully protected.” It also calls for safe and unhindered aid access and for the safe passage of people out of Ukraine.

Ukraine and its Western allies have accused Moscow of attacking civilians indiscriminately. Thousands of people have been killed during Russia’s invasion, which began on Feb. 24, and several million have been displaced.

Russia has called its military actions in Ukraine a “special operation”. It denies attacking civilians and says its air strikes, ground and sea offensive are intended to destroy Ukraine’s military infrastructure.

The U.N. Security Council will also meet on Thursday to be briefed on Ukraine, diplomats said, at the request of the United States, Albania, Britain, France, Ireland and Norway. 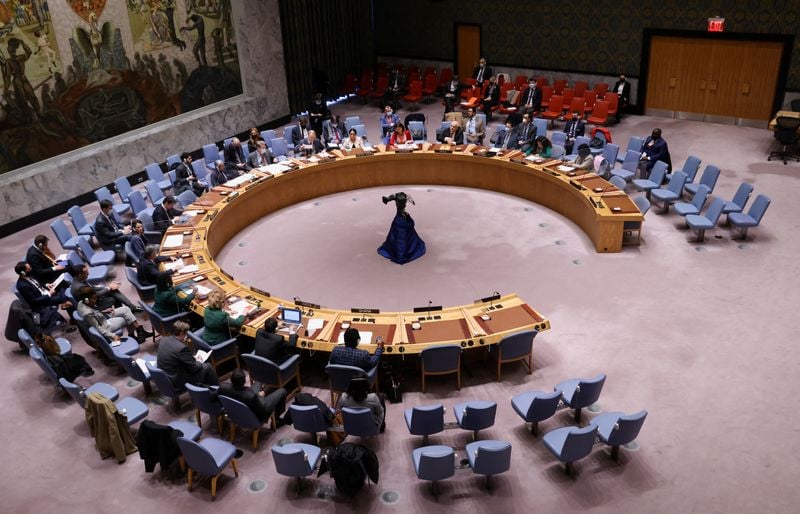