FRANKFURT – The European Central Bank will be in no hurry to raise interest rates and any move will be gradual, ECB President Christine Lagarde said on Thursday, even as another policymaker made the case for one and possibly two rate moves later this year.

Speaking just a week after accelerating the ECB’s exit from unconventional stimulus, Lagarde said the decision gives the ECB “extra space” between the planned end of its money-printing programme this summer and the first interest rate hike in more than a decade.

Investors were ramping up their bets on higher ECB rates after the Federal Reserve raised the cost of borrowing late on Wednesday, tightening its stance for the first time since the start of the coronavirus pandemic and despite uncertainty stemming from Russia’s invasion of Ukraine. [GVD/EUR]

Central banks worldwide have been caught on the hop by a surge in inflation, which hit 5.9% in the 19-nation euro zone last month after spending most of the last decade below the ECB’s 2% target.

But, in a repeat of last week’s message, Lagarde said that any increase in the ECB policy rate will be gradual and come only “some time” after its bond-buying programme ends, now slated for sometime in the third quarter.

“This maintains our traditional sequencing logic, but also gives us extra space if needed after we stop purchasing bonds and before we take the next step towards normalisation,” she told a conference in Frankfurt.

Money markets were pricing in increases worth nearly 50 basis points to the ECB’s deposit rate by the end of this year, which would take it back to zero after eight years in negative territory.

But even one of the most conservative members of the ECB’s Governing Council, Dutch central bank chief Klaas Knot, said he anticipates only one rate hike this year after the central bank brings its bond purchases to an end as early as July.

“A rate hike in the fourth quarter to me still is a realistic expectation,” Knot said at another event, adding that two increases could not be ruled out if inflation forecasts are raised again.

But Bank of Italy Governor Ignazio Visco said those forecasts were already out of date as the outlook had “severely worsened” since their cut-off date on Feb. 28.

“I think households will be hard hit by energy and food price shock, particularly those in the low income brackets,” said Visco, a so-called “dove” favouring easier monetary policy.

The ECB has said it needs to be confident that inflation in the euro zone, including core measures that exclude volatile components such as energy and food prices, stabilises at 2% before raising rates.

Speaking after Lagarde, the ECB’s chief economist Philip Lane said core inflation, which came in at 2.9% in February, would likely fade over time as fuel costs level off.

Lane estimated that around 80 basis points of core or underlying inflation was purely down to the energy price shock.

He added that market-based expectations of long-term inflation, which hit 2.3% earlier this week, were actually still below the ECB’s goal once the risk premium – or compensation demanded by investors at times of uncertainty – was taken out.

Lagarde added that the ECB could devise new tools to ensure monetary policy reaches all corners of the euro zone even as it winds down its bond purchases.

These have helped cap the spread between the borrowing costs paid by top-rated Germany and those of indebted countries like Italy and Greece. 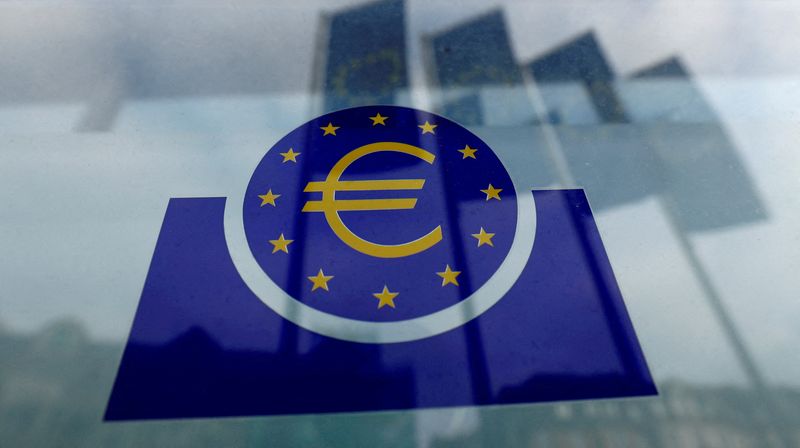