WASHINGTON – An Iraq war veteran who allegedly formed a militia he dubbed the “Proud Boys of North Texas” pleaded guilty on Thursday to a single count of assaulting or resisting police, a charge related to the storming of the U.S. Capitol in an effort to block Congress from certifying President Joe Biden’s election.

The plea from Lucas Denney, 44, of Texas, marked an abrupt shift in the case. Earlier this week, prosecutors had signaled they supported his emergency request to release him from jail and drop criminal charges because they had violated his rights to a speedy trial by failing to secure an indictment until about three months after his December 2021 arrest.

In a surprise move, Denney opted to withdraw his emergency request to have the case dismissed, and pleaded guilty instead.

He did so even as federal prosecutors warned in a virtual hearing in the U.S. District Court for the District of Columbia that they had not ruled out filing additional criminal charges against him in the future.

After that revelation, U.S. District Court Judge Randolph Moss urged Denney to briefly take a recess and confer with his lawyers. After the recess, Denney said he had not changed his mind, and admitted to intentionally hitting a police officer with a pole as the officer was protecting the Capitol grounds.

“It was a plastic pole. It was like a PVC tube,” Denney said.

Denney is one of more than 775 people facing charges for their role in attacking the U.S. Capitol on Jan. 6, 2021.

The government’s criminal complaint alleges that before the attack, Denney and a co-conspirator who also faced charges discussed organizing a militia to go to Washington, D.C.

“The 6th is going to be bigger than the last rally. I can’t tell you everything I know over media here but it’s gonna be big,” Denney allegedly wrote in a message.

“We will need linking up with proud boys though. I’ve been in contact with a few different chapters.”

The complaint says that after Denney arrived at the U.S. Capitol, he started grabbing metal barricades and trying to pull them from police, screaming “Who ya’ll protecting?”

Investigators said that after a police officer sprayed crowd control spray, Denney grabbed a metal pole and tried to swing it at the officer. He eventually managed to make his way into the lower west terrace of the Capitol, where the crowd pushed back against police riot shields while screaming “Heave-ho!”

In a court filing earlier this week, prosecutors urged the judge to sentence Denney to a prison term somewhere between 57 to 71 months, while Denney’s lawyers are asking for a range of 41 to 51 months. 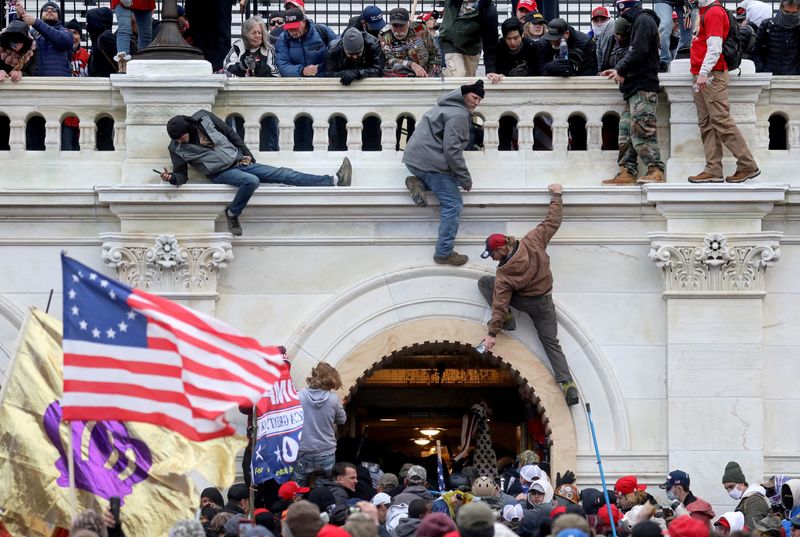