GENEVA -A U.N. human rights expert called on North Korea on Monday to release tens of thousands of people believed to languish in political prison camps, while urging regional and world powers to raise such issues with Pyongyang alongside nuclear concerns.

Tomas Ojea Quintana said that a landmark U.N. investigation in 2014 had found that up to 120,000 people were held in the camps and that he continued to receive allegations about them.

“I have heard accounts that…the system, the political regime in North Korea, would not survive without the existence of political prison camps,” Ojea Quintana told a news briefing.

Noting that there were occasional amnesties for prisoners, he added: “I really urge the leadership to continue to release prisoners especially those most vulnerable and ultimately of course I call for the dismantlement of these facilities.”

Ojea Quintana said that North Korea’s system of ‘kwanliso’ or political prison camps, constituted crimes against humanity – a charge Pyongyang has rejected – and called for perpetrators to face justice.

North Korea, which has repeatedly denied the existence of political prison camps, did not take the floor at the debate. It has previously accused Western powers of using criticism of human rights as part of a hostile policy towards it.

“Authorities in North Korea need to know they have to respond sooner or later for crimes being committed,” Ojea Quintana said. “In some political prisoner camps the prisons are being used for forced labour in coal mines and other kinds of mines.”

Earlier, addressing the Human Rights Council, he urged North Korea to reopen its borders to aid workers and food imports, saying that its further self-isolation during the COVID-19 pandemic may have left many facing “hunger and starvation.”

Some 40% of its population lack adequate food supplies, he said, adding: “Now with the country still in the grip of strict COVID-19 measures, there are serious concerns that the most vulnerable segments of the population may be facing hunger and starvation.”

The Democratic People’s Republic of Korea (DPRK) has not reported any COVID-19 cases and has imposed strict anti-virus measures since the onset of the pandemic two years ago, including border closures and domestic travel curbs.

Foreign aid agencies and embassies largely left the country after the restrictions made it hard to maintain a presence there.

North Korea appeared to have fired a short-range multiple rocket launcher on Sunday, South Korea’s military said, amid heightened military tensions on the peninsula after a spate of larger missile launches by the nuclear-armed North. 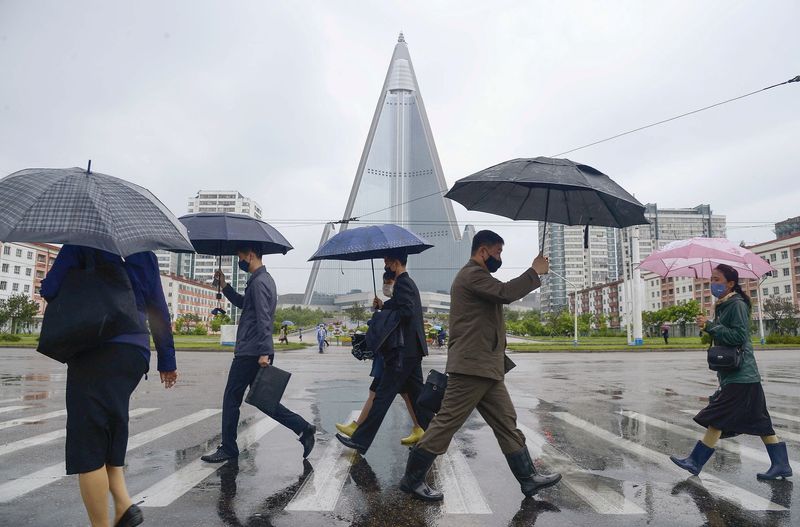