UNITED NATIONS – Russia traded accusations with the United States and Britain at the United Nations on Tuesday over the possibility of a chemical weapons attack in Ukraine, but none produced any evidence to back their concerns.

The comments were made by diplomats to reporters after Russia raised the issue of an ammonia leak in Ukraine’s besieged northeastern city of Sumy – blaming “Ukrainian radical nationalist groups” – during a closed-door U.N. Security Council meeting. The accusation was rejected by Britain and the United States.

“It is clear that the Ukrainian nationalist authorities, encouraged by the Western countries will stop at nothing to intimidate its own people and stage false flag attacks to accuse Russia,” Polyanskiy said.

It was the third time Russia raised the issue of biological or chemical weapons since it began what it calls a “special military operation” on Feb. 24 to “demilitarize” Ukraine. The West and Ukraine reject that as a false pretext to invade a democratic country.

“It’s hard not to conclude – given their record in the UK, in Russia against Alexei Navalny, given what we’ve seen in Syria – that this might well be a prelude to the Russians themselves creating some sort of false flag chemical weapons attack,” Britain’s U.N. Ambassador Barbara Woodward told reporters.

“Our concern is that this is a precursor for Russia’s plans to use chemical weapons,” she said.

A senior U.S. defense official said on Tuesday that the United States has not yet seen any concrete indications of an imminent Russian chemical or biological weapons attack in Ukraine but is closely monitoring intelligence.

President Joe Biden said on Monday, without providing evidence, that Russia’s false accusations that Kyiv has biological and chemical weapons illustrate that Russian President Vladimir Putin is considering using them himself in Ukraine.

Polyanskiy likened the situation in Ukraine to Syria, where he said chemical attacks by “terrorist groups” were blamed on the Russian-backed Syrian government.

A joint United Nations and Organization for the Prohibition of Chemical Weapons (OPCW) inquiry found the Syrian government used the nerve agent sarin and had several times used chlorine as a weapon. It also blamed Islamic State for mustard gas use. 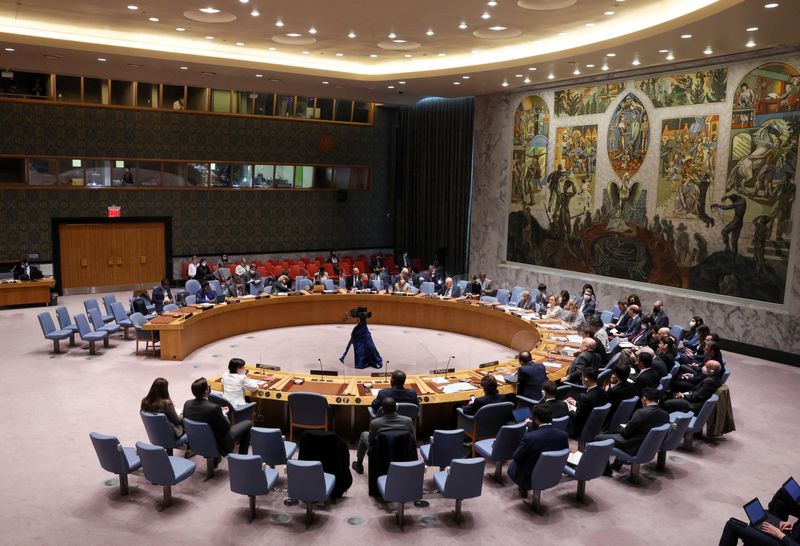