Friday evening, while responding to a reported group of migrants on the east side of the Sierra Pinta Mountains, a remote area between the Wellton and Ajo Border Patrol Stations, a Yuma Air Branch (YAB) AS350 (ASTAR) aircrew saw a small light in an area that normally does not have lights. Suspecting someone was in trouble and needed help, the aircrew diverted to the light and upon descending determined there were two individuals who were in distress trying to signal the aircraft with a fire. The aircrew used the public address system to tell the subjects to stay where they were and that an agent would come pick them up. The aircrew notified the Ajo Border Patrol Station, and an agent was directed to the location. Due to the extended travel time to the extremely remote area, the aircrew landed to assess the subjects, give them water, and provide them some comfort, until Border Patrol agents arrived.

The aircrew learned that the pair (mother and adult son) had been part of a group of 5 who illegally crossed the border 8 days prior. The pair stated that they had been left behind by the group because they could not keep up and that they had not had water for 5 days. The mother was having difficulty walking due to pain in her legs and her son remained with her. Ajo Border Patrol agents arrived a few hours later and transported the pair to the Ajo Border Patrol Station.

“The aircrew’s diligence and professionalism certainly saved the person’s lives,” said Director of Air Operations, Yuma Air Branch, Douglas Murray. “The remote and extreme terrain of the Sonoran Desert, the lack of water and the injuries are fully capable of producing deadly results for the pair. But not in this case.” 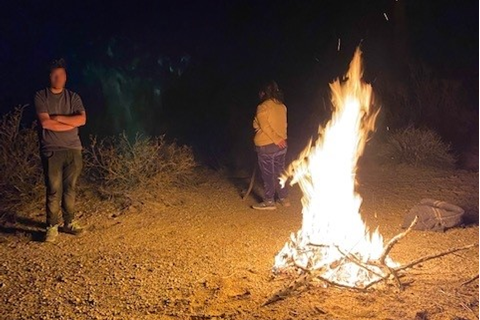 Two migrants in distress were rescued by an aircrew from Yuma Air Branch. The pair was lost an had been left behind by smugglers without water five days prior.