BRUSSELS – U.S. President Joe Biden said on Thursday he would be lucky if his Republican predecessor, Donald Trump, made another bid for the White House in the 2024 presidential election.

A news conference after meetings with NATO leaders veered into U.S. politics when Biden was asked about European concerns that “a figure like your predecessor, maybe even your predecessor himself” could take office and undo U.S. and NATO efforts to address Russian aggression in Ukraine.

“The next election – I’d be very fortunate to have that same man running against me,” said the Democratic president, who defeated Trump in the 2020 election.

The quip came after a long answer that included why he decided to run for president in 2020 after Trump’s tepid response to 2017 far-right rally in Charlottesville, Virginia.

Biden, who has worked hard to rebuild ties with European and other allies that were frayed during the Trump administration, said the next election was a long way off and that he was focused on making sure Democrats do well in congressional elections in November.

“But it’s not an illogical question for someone to ask,” he said, especially after the Jan. 6, 2021, attack on the U.S. Capitol by Trump supporters.

“If we sat and watched the doors of the Bundestag broken down and police officers killed, and hundreds of people storming in,” Biden said, “Imagine that we saw that happening in the British parliament. How would we feel?

As is his wont, Biden did not say Trump’s name, referring him as “that gentlemen you mentioned” or something similar.

Democratic political advisers close to Biden have been expressing the same sentiment for months, seeing Trump as one of the weaker contenders among hypothetical candidates in a head-to-head contest with Biden.

Trump has not announced his candidacy for 2024, which would require him to set up a separate fundraising account for his campaign, but he regularly hints at his political rallies that he intends to run for president again.

A Trump representative did not immediately return a request for comment. 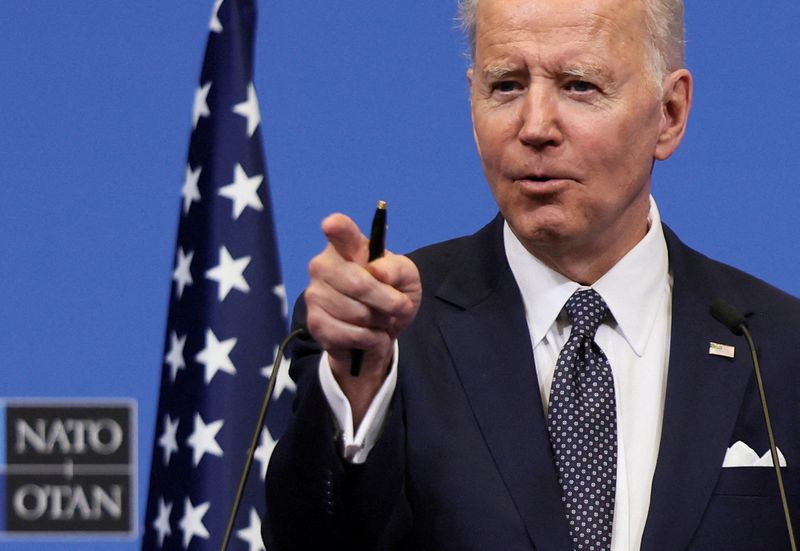