By Philip Blenkinsop and Marine Strauss

BRUSSELS -EU leaders bickered on Friday over steps to ease the energy market crunch exacerbated by Russia’s invasion of Ukraine, but managed to present a united front amid mounting concern over the impact on hard-hit consumers of soaring gas and oil prices.

An intense debate on whether to cap energy prices, which pitted some of the European Union’s southern countries against Germany and the Netherlands, spun the second day of an EU summit well into the evening and ended with a trade-off deal.

At one point Spanish Prime Minister Pedro Sanchez left the summit meeting room for “a technical stop, so that the negotiations could get back on track,” a Spanish official said.

The war in Ukraine has pushed energy prices to fresh record highs and prompted the European Union to pledge to cut Russian gas use by two-thirds this year, by hiking imports from other countries and boosting renewable energy.

Sanchez said after the summit that Spain and Portugal would be allowed to implement temporary measures to cut energy prices.

European Commission President Ursula von der Leyen made clear that an exception had been agreed for these countries, describing it as “special treatment for the Iberian peninsula.”

Earlier on Friday, U.S. President Joe Biden – who joined the first day of the summit – committed to helping Europe with more LNG deliveries as it grapples with the need to reduce dependency on Russia for its energy needs.

Russia supplies 40% of the gas the EU needs for heating and power generation and more than a quarter of its oil imports.

“The EU is not only about big principles, big meetings and American presidents,” he said.

“Today is about the everyday issues of the people and that is the electricity and gas invoice of the people, and that’s the impact we see today of that war in Ukraine,” he said. “We are at war and in a war you need to take extraordinary measures.”

There was agreement among the 27 member states on a plan for joint purchases of gas to tame prices.

The European Commission has said it is ready to lead negotiations on pooling demand and seeking gas before next winter, following a similar model through which the bloc bought COVID-19 vaccines on behalf of member states.

However, the EU remained divided over whether to ban Russian oil and gas imports in addition to the slew of sanctions it has imposed on Moscow since the invasion a month ago.

Moscow calls its actions in Ukraine a “special military operation” to demilitarise and “denazify” Ukraine. Kyiv and the West say Putin launched an unprovoked war.

Europe’s dependency on energy from Russia means the question of whether to impose an embargo, as the United States has done, is economically risky, and no decision was taken on Friday.

Germany, Hungary and Austria were among the most reticent about imposing a ban on Russian oil and gas.

No common position emerged either on Russia’s demand this week that “unfriendly” countries must use roubles to pay for its oil and gas, and whether the Commission would get a mandate to tackle that.

The Kremlin’s demand poses a dilemma for countries reliant on Russian energy because, by agreeing to it, they would be shoring up the rouble and channelling hard currency into Moscow – but refusal could mean their energy supplies dry up. 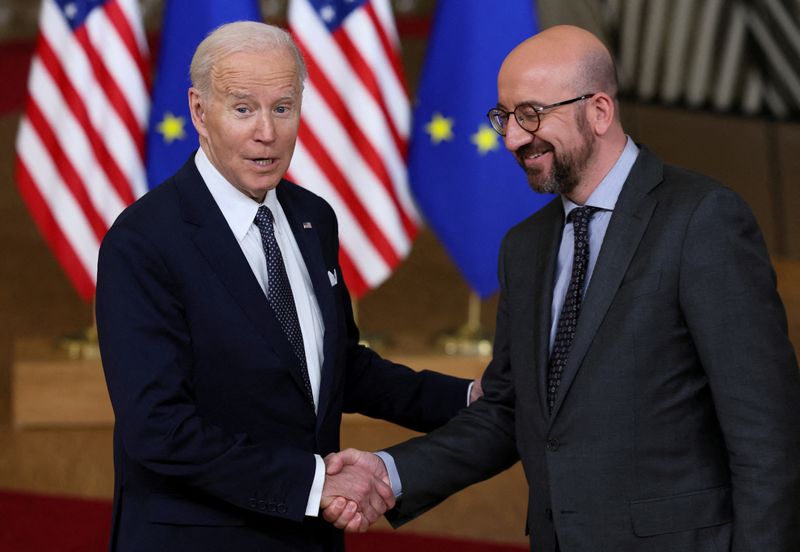