By Ahmed Rasheed and Amina Ismail

BAGHDAD – Iraq’s parliament failed again on Saturday to vote for a president after Iran-backed groups boycotted the session, in a setback to an alliance led by cleric Moqtada al-Sadr which won the election and threatened to remove them from politics.

But only 202 members of parliament out of 329 were present, which is less than the necessary two-thirds quorum needed to choose a new president for the mostly ceremonial post, while 126 lawmakers boycotted the session.

“It is a storm in a cup. Today is a good proof that the party that had claimed that it has the majority had failed to achieve it. It is a bad situation getting worse” said Farhad Alaaldin, chairman of the Iraq Advisory Council, a policy research institute.

A win for Sadr’s allies would threaten to exclude Tehran’s allies from power for the first time in years.

The delay prolongs a bitter deadlock in Iraqi politics months after an October general election from which Sadr emerged the biggest winner, with his Shi’ite, pro-Iran rivals receiving a hammering at the polls.

The vote on the president was postponed to Wednesday. The current caretaker government will continue to run the country until a new government is formed.

Sadr, a Shi’ite cleric, has pledged to form a government that would exclude key Iranian allies that have long dominated the state, a red line for those parties and militias and the first time they would not have a cabinet place since 2003.

The candidates put forward for president in the months since the election have been viewed by Iran-aligned groups as Western-leaning and a threat to their interests.

An attempt to secure the post for Kurdish politician Hoshyar Zebari, a former foreign minister, failed when Iraq’s Supreme Court last month banned his candidacy of over alleged corruption charges that had resurfaced. Zebari, who was backed by Sadr and allies of Sadr, denies the charges.

Under a power-sharing system designed to avoid sectarian conflict, Iraq’s president is a Kurd, its prime minister a Shi’ite and its parliament speaker a Sunni.

Since the U.S.-led invasion of 2003 that toppled Sunni dictator Saddam Hussein, the selection of a president and prime minister after each election has been a long, slow process hampered by political deadlock.

Iran-aligned groups have normally had their way, using their role in defeating Islamic State in 2017 to catapult commanders into parliamentary seats in an election the following year.

Sadr opposes all foreign influence in Iraq, including by the United States and Iran. He has increased his political power in recent years but must still contend with his Shi’ite rivals.

Sadr has vowed to push through what he calls a “national majority” government, a euphemism for one that excludes pro-Iran groups. Those groups retain heavily-armed and powerful militias and maintain a grip over many state institutions.

Sadr’s Sadrist Bloc has joined forces with the Kurdish Democratic Party and a Sunni Muslim alliance in efforts to form a parliamentary majority.

Most Iraqis view all groups involved in governing the country as corrupt. Anger has simmered for years at the Shi’ite-dominated political class that emerged after the 2003 invasion.

That anger burst into mass demonstrations in 2019, in which government security forces and Iran-aligned militiamen shot dead hundreds of demonstrators.

Officials and analysts fear Sadr’s intensifying face-off with the Iran-aligned groups could descend into violence. 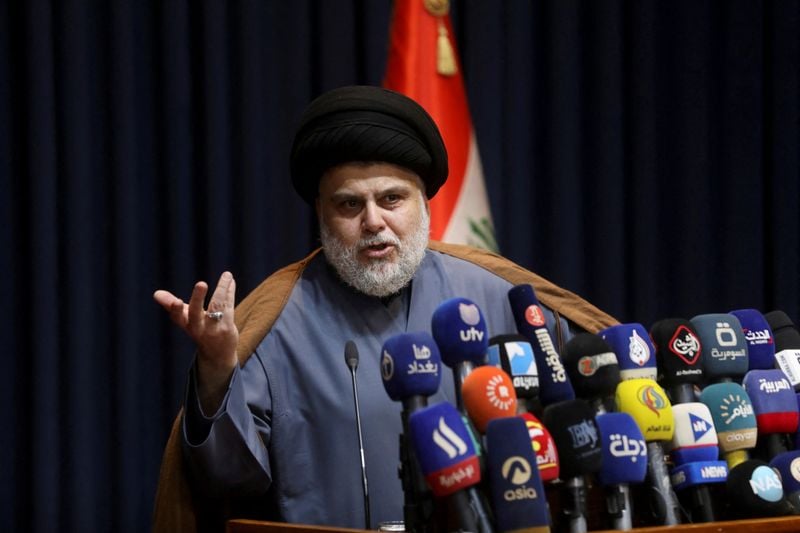