By Susan Mathew and Anisha Sircar

(Reuters) -European shares rallied on Tuesday, taking cues from strength in Asian markets and on Wall Street, as peace talks between Russia and Ukraine yielded the most tangible sign yet of progress towards negotiating an end to the war.

The pan-European STOXX 600 index climbed 1.6% to its highest in nearly a month, and extended gains to a third straight session, as a sell-off in bonds continued. [GVD/EUR]

All major sectors were in positive territory, led by automakers and banks which jumped 5.9% and 3.8% respectively.

Russia promised on Tuesday to scale down military operations around Kyiv and northern Ukraine as a confidence-building step. Ukraine proposed adopting neutral status in the most detailed formula yet for a potential settlement to the five-week conflict.

“After the potential breakthrough in peace talks, European stocks accelerated gains made earlier in the day, as there has been real concern, not just about violence on Europe’s doorstep, but also the effects on commodities,” said Susannah Streeter, senior investment and markets analyst at Hargreaves Lansdown.

Germany’s two-year yield briefly turned positive for the first time since 2014, while the U.S. 2-year/10-year Treasury yield curve moved another step closer to inversion. [GVD/EUR] [US/]

“You’re not seeing the same movements in Germany treasury markets as in the U.S., but soaring inflation could prompt the European Central Bank, too, to tighten faster than anticipated, which will spur an increased cost of living squeeze for consumers… The other worry is the possible recession indicated,” Streeter added.

Investor focus is also on oil and gas supplies after Russia said it would accept payments for its gas exports in roubles. Russian gas accounts for about 40% of Europe’s total consumption and the move could exacerbate a crunch in the continent and fan inflation.

Gains in London’s FTSE 100 were curbed by a 2.5% slide in lender Barclays after one of its top investors offloaded stock roughly equivalent to a 3% stake in the bank.

The STOXX 600 is on course to end March with small gains – its first month in the black this year. But the index is on course for its first quarterly loss in eight, as worries over broadening inflation given the surge in commodity prices and the subsequent hit to economic growth keep risk appetite in check.

Shares of Maersk slipped 4.1% after the Danish shipper said the Shanghai lockdown will hurt trucking services and increase transport costs, while the world’s biggest cement-maker Holcim gained 3.9% after saying it is exiting the Russian market. 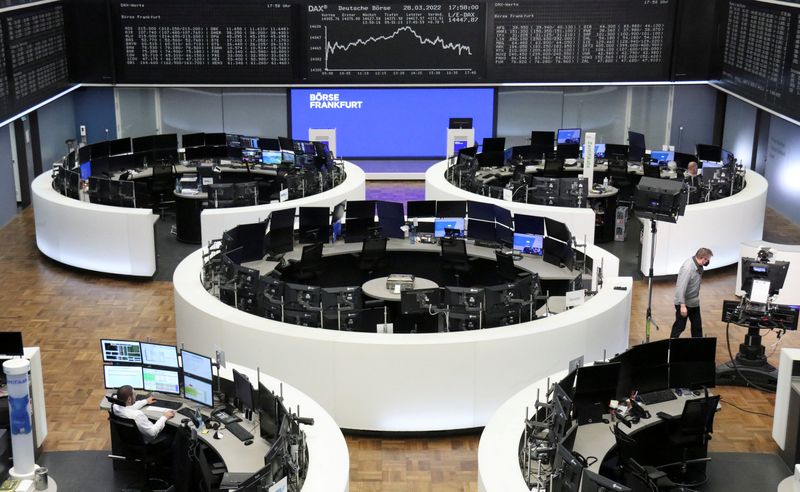