SYDNEY -Qantas Airways Ltd plans to reduce carbon emissions by about 25% by 2030, in part by boosting sustainable aviation fuel to 10% of its fuel mix and increasing the fuel efficiency of flights by 1.5% a year.

Qantas, one of the first carriers in the world to pledge to slash carbon emissions to net zero by 2050, has been moving to align itself more closely with corporate customers looking for drastic cuts in emissions from business travel well before that date.

“What we are seeing from our customer base is a lot of customers we already know would be willing to pay more to travel sustainably,” Chief Executive Alan Joyce told reporters on Thursday.

Several companies, such as HSBC, Zurich Insurance, Bain & Company and S&P Global, have already announced plans to quickly cut business travel emissions by as much as 70%.

“Hydrogen or electric powered aircraft are several decades away, particularly for the length of most flights, so our plan is focused on the technology that is within reach today,” Joyce said.

The target of 10% sustainable aviation fuel (SAF) by 2030 is in line with a goal set by the oneworld airline alliance, in which it is a member, in October 2021.

Qantas has begun purchasing SAF for its flights from London to help reduce carbon emissions on those journeys by around 10% and from 2025, it will use biofuels on flights from Los Angeles and San Francisco.

The airline will invest A$50 million ($37.54 million) to help develop a SAF industry in Australia, but more government support is also needed, Joyce said.

“It would be a shame if Qantas meets its 10% sustainable aviation fuel target in 2030 by buying offshore,” he said.

The industry-wide target of net zero emissions by 2050 relies on boosting use of SAF from less than 0.1% today to 65% by 2050 as well as new engine technologies.

Qantas is nearing a major order for Airbus’ latest generation narrowbody planes that would replace its fleet of older Boeing 737-800s and 717s, allowing for fuel savings of 15-20%. A firm order is expected by mid-year, Qantas said on Thursday.

The airline also expects within a decade there could be hybrid-electric engines retrofitted on its turboprops, Chief Sustainability Officer Andrew Parker said.

Qantas said it would consider the cost of carbon in investment decisions and link climate change performance targets to executive pay from the financial year starting in July.

Qantas also plans to eliminate single-use plastics by 2027 as part of its broader environmental goals. 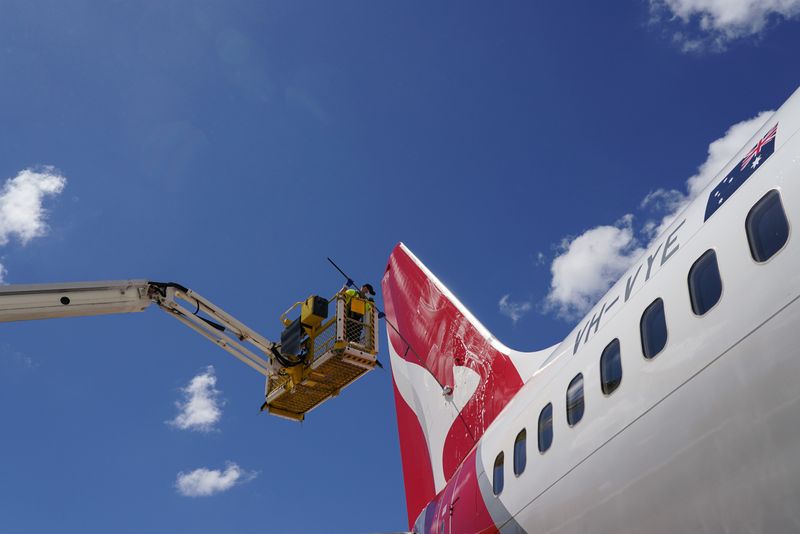