LONDON (Reuters) – Russia and Ukraine are talking about a peace deal while their soldiers kill each other, but there has been no breakthrough and they remain far apart on the question of territory.

President Vladimir Putin says the “special military operation” in Ukraine is necessary because the United States was using Ukraine to threaten Russia and Moscow had to defend against the persecution of Russian-speaking people by Ukraine.

Ukraine says it is fighting against an imperial-style land grab and that Putin’s claims of genocide are nonsense.

WHAT ARE THE MAIN ISSUES?

1) Territory: This is the toughest part of the talks. Neither side has compromised or shown any sign of an intention to. One option being discussed is to simply to try to park the issue – in other words, agreed ambiguity for years to come.

Since their invasion, Russian forces have taken control of a swathe of territory across Ukraine’s southern flank north of Crimea, territory around the rebel regions and territory to the east and west of Kyiv.

Russia has at least another 170,000 square km of territory – an area about the size of Tunisia or the U.S. state of North Dakota – under its control.


Ukraine has said it will never recognise Russia’s control over Crimea, the independence of the Russian-backed rebel regions or the vast additional territory taken by Russia.

Kyiv has repeatedly demanded the withdrawal of Russian troops from Ukrainian territory – including Crimea. Ukrainian officials say they will not accept annexation of territory or recognise the Russian-backed rebel regions of Luhansk and Donetsk.

Recognition of what amounts to effective Russian sovereignty over up to a third of its territory would be difficult for any Ukrainian leader.

For Moscow, Ukrainian recognition of Russian control of Crimea, the rebel regions and probably the swathe of land north of Crimea which gives it a land bridge to Crimea and control over drinking water supplies for the peninsula, would be essential.

The territory along the southern flank of Ukraine is of particular interest to Russia as it was added to Russia in 1783 by Russian Empress Catherine the Great after the defeat of the Ottoman Empire.

One option is to effectively park the question of Crimea by agreeing to a 15-year consultation period on the status of annexed Crimea. Ukrainian nationalists, though, might see that as a partition in all but name.

Kremlin spokesman Dmitry Peskov said that Crimea was part of Russia so there would be no discussions about its fate.

Some analysts are sceptical despite optimistic statements after talks in Istanbul on Tuesday.

“Moscow will not agree anything with Kyiv unless it is a full capitulation (and that is not what is being talked about),” said Tatiana Stanovaya, a non-resident scholar at the Carnegie Moscow Center.


2) Neutrality: Ukraine agrees to be neutral which it did in 1990 in any case.

Ukraine has proposed in writing that it become a neutral country in return for security guarantees from the United States, United Kingdom, Turkey, France and Germany.

Such a decision would require a referendum and Kyiv has said that security guarantees could only be given once Russia withdraws troops.

After talks in Turkey, Russia agreed to scale down military operations around Kyiv.

Russia’s Medinsky said Ukraine had expressed a willingness to agree to Moscow’s key demands – give up its NATO alliance ambitions, adopt “non-bloc” status, renounce any attempt to acquire nuclear or other weapons of mass destruction and commit not to host foreign troops or military bases.

“If these obligations are met, then the threat of creating a NATO bridgehead on Ukrainian territory will be eliminated,” he said.

Russia would then not oppose Ukraine – the parts still under Kyiv’s control – from joining the European Union, according to the Ukrainian proposal.

The devil, though, will be in the detail and the chronology. As the Soviet Union crumbled, Ukraine’s parliament in its 1990 Declaration of State Sovereignty proclaimed its intention to be a permanently neutral state.

Putin said in February that he wanted written guarantees Ukraine would never join the NATO military bloc. Ukrainian President Volodymyr Zelenskiy has said Ukraine would not join NATO soon because members would not accept Ukraine.


Russia has also repeatedly raised concerns about Ukraine developing nuclear weapons. In the 1994 Budapest Memorandum, the United States, Russia and the United Kingdom gave Ukraine security assurances in exchange for Kyiv’s adherence to the Treaty on the Non-Proliferation of Nuclear Weapons.

3) Russian rights: The status of Russian language and Russian-speaking people in Ukraine is an issue for Moscow. A law passed by Ukraine in 2019 granted special status to the Ukrainian language and made it mandatory for public sector workers.

The Azov Battalion, part of Ukraine’s national guard, has been accused by Moscow of being a Nazi organisation which has terrorised Russian civilians and carried out war crimes.

Formed in 2014 from volunteers who fought against Russian-backed rebel regions, its founders have expressed extreme right-wing white supremacist and anti-Semitic views. The Azov Battalion did not reply to a request for comment.

Ukrainian presidential aides have repeatedly mentioned the role of Azov in the defence of the port city of Mariupol where it is based.

Ukraine dismisses such claims of genocide against Russian speakers. Zelenskiy says it is Russia that is behaving like the Nazis by visiting destruction on Ukrainian cities.

WHO IS TALKING AND HOW?

Talks on trying to find an end to the conflict began on Feb. 28, four days after Putin ordered troops into Ukraine. Some talks have been in person at the Belarusian border or in Belarus and Turkey, while others have taken place via video conference.


The Russian team is led by presidential adviser Medinsky, a Russian who was born in Soviet Ukraine but who casts modern Ukraine as a “historical phantom” because “the so-called history of Ukraine is not simply inextricably linked to the thousand year history of Rus/Russia/U.S.S.R. but it is Russian history itself”.

He said on Wednesday that Ukraine had expressed a willingness to agree to Russia’s demands. Ukraine’s negotiating team is Defence Minister Oleksii Reznikov and presidential adviser Mykhailo Podolyak.

A meeting between Putin and Zelenskiy would indicate a real chance of peace as Russia has repeatedly said there will be no meeting until the details of a deal have been largely agreed. 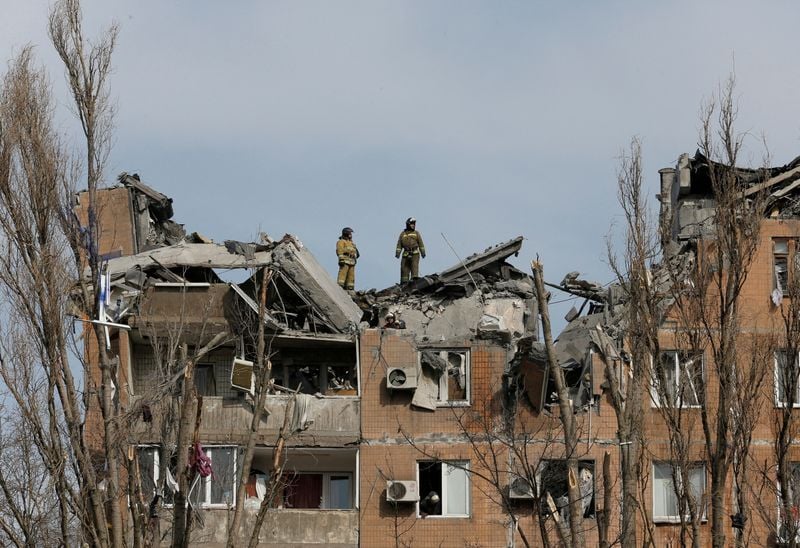