BUDAPEST -Emboldened by a fourth consecutive landslide election victory, Hungarian Prime Minister Viktor Orban is expected to dig in against energy sanctions on Russia and toughen his stance in talks with Brussels to unlock frozen EU funds.

Nationalist Orban, who held on to his sweeping majority on Sunday, crushing the opposition despite efforts to unite against him, will likely continue to reject any EU sanctions on Russian oil and gas, arguing they would wreck an economy already slowing due to the impacts of the Ukraine war.

Using his strong mandate, Orban will also entrench his conservative policies at home and could attempt to squeeze out foreign companies in some sectors like retail where Hungarian ownership is still not dominant, as his Fidesz party aims to form its own class of loyal industrialists.

But Orban faces some tough challenges: he needs to mend relations with his eastern allies like Poland, strained by his cautious stance on the Ukraine war after a decade of close business ties with Russian President Vladimir Putin.

He also has to rein in a swelling budget deficit at a time when the Hungarian economy is set to slow due to supply chain disruptions in the car sector.

Unlocking recovery funds withheld by Brussels could play a key role in fixing the budget, so Orban is expected to fight for that, but it could be a lengthy process.

The EU has suspended payments to both Poland and Hungary from its pandemic recovery funds over perceived democratic shortcomings, which economists say could begin exerting pressure on Budapest and Warsaw from the second half of the year, barring a compromise.

“The expectation that there could be a relatively quick agreement with the European Commission (on EU funds) is questionable now after in his speech last night Viktor Orban took a repeated swipe at Brussels,” said Peter Virovacz at ING in Budapest.

“We can hardly expect that his government, with two-thirds majority now, will be as ready for a compromise as it would have been with a simple majority win in elections.”

Pre-election surveys had pointed to a much closer race.

Surrounded by leading party members, a triumphant Orban, 58, said Sunday’s victory came even with Brussels bureaucrats and the international mainstream media all teaming up against him.

“We have scored a victory so big, that it can be seen even from the Moon, but definitely from Brussels,” he said.

Based on preliminary results, Fidesz will have 135 seats, a two-thirds majority in parliament, with 56 seats going to the opposition alliance.

His critics say the victory could embolden Orban in what they say is an erosion of democratic norms, media freedom and the rights of LGBTQ people.

“Without wanting to sound overly dramatic, it’s a tragedy. Looks like the end of whatever dreams one might have had of democracy in Hungary,” an EU official said.

“We’d have to cut money transfers so that he doesn’t build his own oligarchy with our money.”

In Poland, Orban’s re-election was welcome with mixed feelings among the ruling nationalists.

“Putin is a long-term threat also for Hungary and whoever doesn’t see that is making a big mistake,” Polish deputy foreign minister Marcin Przydacz said on Monday.

In bright sunshine after Sunday’s snowfall, some residents in Budapest, which remains an opposition stronghold with the alliance winning in 16 of 18 constituencies, remained hopeful.

Others said Orban’s positioning on Ukraine, accusing the opposition of risking Hungary being dragged into the war by seeking to allow arms shipments through its territory, played into their choice.

“I did not hope for such a big victory but I was sure that the present government party would win,” said Veronika Nagy, a language teacher. “I think it is due to how the parties reacted to the war, perhaps the … opposition made people uncertain.”

One of Europe’s longest-serving leaders, Orban has emerged as a vocal supporter of anti-immigration policies and was especially popular with voters in rural areas who espouse his traditional Christian values and with families who benefit from a host of tax breaks and price caps on fuel and some foodstuffs.

With inflation running at an almost 15-year high of 8.3% in February, Orban will have a tough task in unwinding some of his measures that had helped tame price growth in the run-up to the vote. 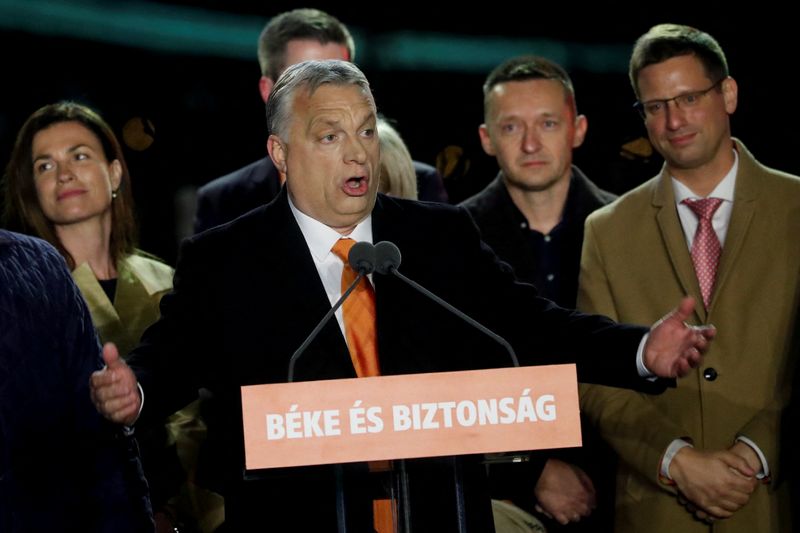