LONDON (Reuters) – Thousands of holidaymakers have seen their Easter getaways disrupted or cancelled because airlines and airports do not have enough staff to meet the recovery in demand as pandemic restrictions are eased in Europe.

High rates of COVID-19 in Britain have caused staff absences for airlines and airports that were already struggling to recruit after workers deserted the industry during the pandemic.

Low-cost carrier easyJet was one of the worst affected, saying it cancelled around 60 UK flights on Tuesday and expected to pull a similar number in the coming days. It cancelled more than 200 at the weekend and another 62 on Monday.

Paul Charles, head of travel consultancy The PC Agency, said it could take at least two or three months to get through a nasty cocktail of staff shortages, COVID illness and a backlog in approving security passes for airport and airline workers.

“It’s ironic that the very desire to get people booking again, post-pandemic, is causing more difficult transport issues than those created by COVID itself,” he said.

EasyJet said it was rostering additional standby crew, but it had cancelled some flights on routes where it runs frequent services so passengers had options to rebook.

British Airways (BA) cancelled 662 flights in the week to Sunday, aviation analytics firm Cirium said, though that includes long-haul flights suspended due to sanctions and restrictions, such as on Russia and COVID-affected parts of Asia respectively. BA declined to provide a figure for cancellations.

The carrier was also hit by another IT failure on Wednesday. The number of flights cancelled due to staff sickness in recent days was in the single digits, a spokesperson said on Tuesday.

But delays in government-required checks for new staff were hampering the ramp up of flights into summer, he said, and it had already trimmed its planned increase in services by about 20 flights a day until the end of May.

Staff shortages are a problem on the ground as well as in the air.

Queues at Manchester Airport, Britain’s third busiest after London’s Heathrow and Gatwick, snaked out of one terminal on Tuesday, and passengers complained of hours waiting at the baggage carousel.

The airport has apologised for the disruption.

“As we continue to recover from the pandemic and passenger numbers grow, security queues may be longer than usual at times,” it said on Twitter.

But a combination of a tight labour market, delays in the security checks for new and returning staff as well as COVID-related absences could put some airports under strain.

“This may mean longer queues at peak travel times,” it said.

Dublin Airport warned passengers that lengthy queues were likely for weeks as it rebuilds its operation and recruits and trains new security staff. Ryanair, Europe’s largest low-cost carrier whose passenger numbers topped pre-pandemic levels last month, has called on the Irish government to use the army to deal with the delays, fearing the impact on the key Easter holiday period.

The group, which runs facilities in nine countries and the main airport in Frankfurt, aims to hire 1,000 worker this year and recruited about 300 in January-March, a spokesperson said.

(Reporting by Paul Sandle in London, Padraic Halpin in Dublin and Zuzanna Szymanska in Berlin; Editing by Mark Potter) 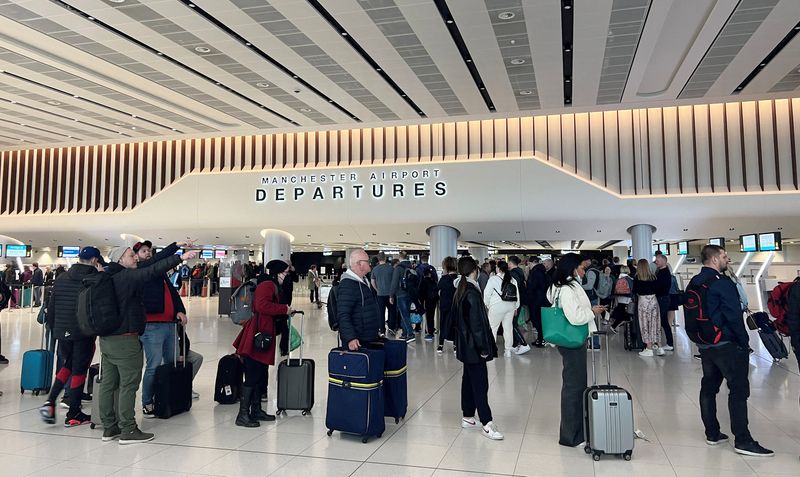