LONDON (Reuters) – British shoppers are increasingly choosing own-label products to help counter surging inflation, according to research by NielsenIQ that showed overall supermarket spending down on a year ago when COVID lockdown measures were in place.

Sales of branded grocery products fell by 5.1% in the four weeks to March 26, while sales of own-label, or private-label, products created for chain stores were down 1.9%, the market research company said.

“As we leave behind the pandemic, it’s clear that shoppers are re-evaluating what they spend,” said Mike Watkins, NielsenIQ UK head of retailer and business insight.

“Whilst some of the changes in grocery spend will be due to consumers simply having a different basket mix compared with last year, our data also shows that consumers are now increasingly shopping for private-label products as part of their coping strategy.”

Sales of private-label products in the ambient or packaged grocery category increased by 3.3%; a significant change in a category where brands dominate, with 61% share of total sales, it said.

UK inflation hit a 30-year high of 6.2% in February and is heading for 9% later this year, according to the government’s budget watchdog, which predicted living standards in 2022 would fall by the most since at least the 1950s.

Overall grocery spending fell 4.1% year-on-year in the period, the steepest decline so far recorded in 2022, NielsenIQ said on Tuesday.

However, the period was the final comparison against extensive lockdown measures, indicating a potential return to growth post Easter and into the spring.

The strongest performing retailers were M&S, with sales up 9.4%, and German discounters Lidl and Aldi, up 8.6% and 5.6% respectively. The three were the only retailers to gain market share, it said. 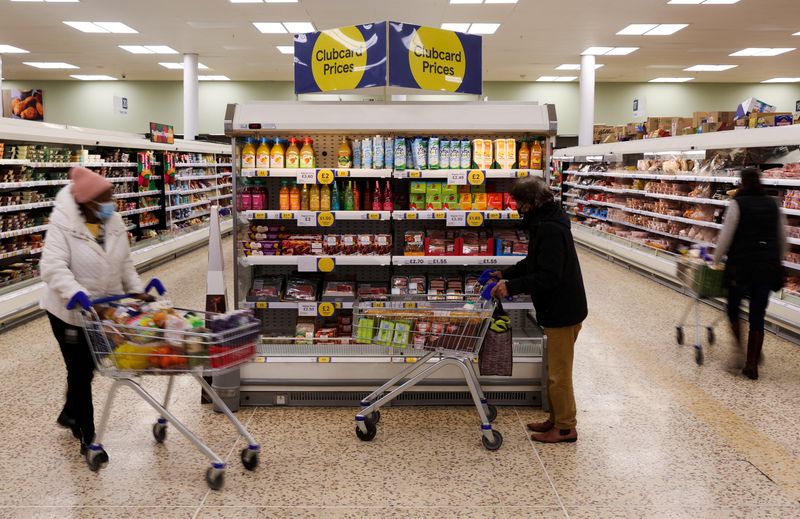