DUBAI (Reuters) – Yemen’s President Abd-Rabbu Mansour Hadi, who ceded his powers to a presidential council on Thursday, fell foul of foes and allies in his efforts to cling to power from exile in Saudi Arabia, while often blocked from visiting his war-torn nation.

Hadi’s ambitions were first foiled by the Iran-aligned Houthis who ousted him from Yemen’s capital, Sanaa, in late 2014, and again by southern separatists, nominal allies backed by the United Arab Emirates, who twice seized control of Aden, interim seat of his government.

Riyadh kept him at the helm to preserve the recognised government, on whose behalf a Saudi-led coalition intervened against the Houthis in March 2015. But the UAE disapproved of his alliance with the Islamist Islah Party.

Hadi, 76, was kept largely secluded from the outside world, relying on a small group of family members and political allies to be his eyes and ears, analysts have said.

“Broader support for Hadi is predicated on his symbolic value more than his popular appeal,” the International Crisis Group has said.

“For many Yemenis, the president has become a holding vehicle for the ideals of the 2011 uprising and the subsequent transitional period.”

A former army general from Yemen’s south, Hadi moved to the north amid political turmoil at home in 1986. He rose through the ranks to become vice president under then-President Ali Abdullah Saleh, who united north and south Yemen in 1990.

Hadi took the helm of a crumbling state after Arab Spring protests in 2011 brought down Saleh, later killed in 2017 while trying to switch allegiances.


Hadi was the only name on the ballot for 2012 elections meant to guide predominantly Sunni Yemen through a transition to democracy shepherded by Western and regional powers led by neighbouring Saudi Arabia.

But, inheriting a nation in chaos, he faced long odds in what was meant to be a two-year term overseeing the transition.

The economy was collapsing, al Qaeda struck at the army and state, while secessionism festered in the north in the form of the Shi’ite Houthis and in the south by separatists.

Hadi suggested his former boss Saleh made no attempt to help him face a kaleidoscope of feuding politicians and militants.

“There’s a planned conspiracy, and alliances among the former stakeholders itching for revenge,” Hadi said after Sanaa fell to the Houthis in 2014.

The ensuing war between the Houthis and the Saudi-led coalition killed tens of thousands and pushed Yemen to the brink of famine.

Hadi’s government has faced the same accusations of corruption and mismanagement as his autocratic predecessor, from both the Houthis and nominal allies under the coalition.

Hadi failed to build a power base of his own during decades in uniform. After assuming power, he launched a “National Dialogue” to hash out a new constitution, but matters quickly unravelled.


Saleh’s army and government allies undermined the transition as al Qaeda militants carved out a mini-state and hit Sanaa with ever bloodier bombings.

The Houthis seized Sanaa with help from army units loyal to Saleh, forcing Hadi to share power. When the National Dialogue proposed a federal constitution, both Houthis and southern separatists rejected it for blunting their new-found sway.

The Houthis arrested Hadi in early 2015, but he escaped and fled to the southern port of Aden. The Houthis pursued him.

In March 2015, the Saudi-led coalition entered the war to prevent Iran gaining influence via the Houthis on its border and to preserve the Gulf-brokered transition.

They took Hadi to Riyadh and wrested control of Aden, where Hadi’s government later faced a power struggle for the south with UAE-backed separatist Southern Transitional Council (STC).

Riyadh brokered a fragile power-sharing deal in 2019, leading to a new cabinet including the STC the next year.

In a televised speech on Thursday, Hadi said he was ceding his powers “to allow effective leaders a role in running the country” and to help end the bloodshed and “build a new Yemen”. 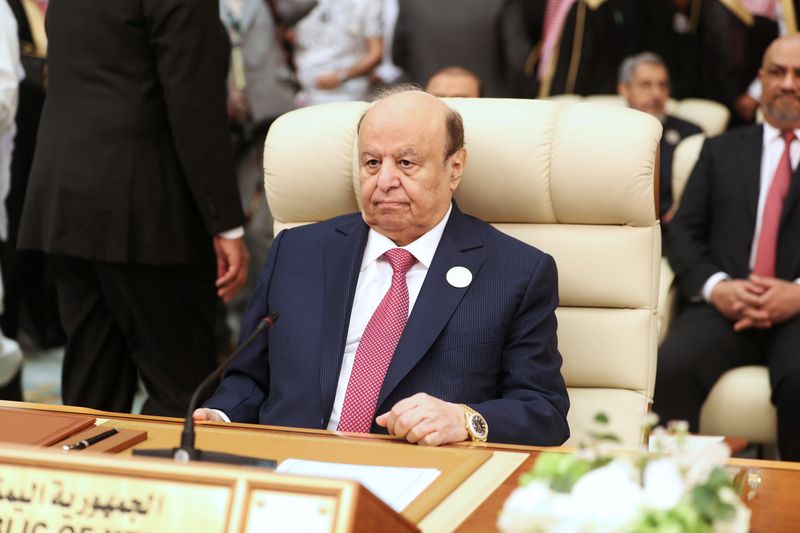