ISLAMABAD (Reuters) – Shehbaz Sharif, the person most likely to be Pakistan’s next prime minister, is little known outside his home country but has a reputation domestically as an effective administrator more than as a politician.

The younger brother of three-time prime minister Nawaz Sharif, Shehbaz, 70, is leading a bid by the opposition in parliament to topple Imran Khan, and if a vote of no-confidence goes ahead on Saturday he is widely expected to replace Khan.

Pakistan’s generals have directly intervened to topple civilian governments three times, and no prime minister has finished a full five-year term since the South Asian state’s independence from Britain in 1947.

Shehbaz Sharif, part of the wealthy Sharif dynasty, is best known for his direct, “can-do” administrative style, which was on display when, as chief minister of Punjab province, he worked closely with China on Beijing-funded projects.

He also said in an interview last week that good relations with the United States were critical for Pakistan for better or for worse, in stark contrast to Khan’s recently antagonistic relationship with Washington.

There are still several procedural steps before Sharif can become Pakistan’s 23rd prime minister, not including caretaker administrations, although the opposition has consistently identified him as its sole candidate.

If he does take on the role, he faces immediate challenges, not least Pakistan’s crumbling economy, which has been hit by high inflation, a tumbling local currency and rapidly declining foreign exchange reserves.

Analysts also say Sharif will not act with complete independence as he will have to work on a collective agenda with the others opposition parties and his brother.

Nawaz has lived for the last two years in London since being let out of jail, where he was serving a sentence for corruption, for medical treatment.

As chief minister of Punjab, Pakistan’s most populous province, Shehbaz Sharif planned and executed a number of ambitious infrastructure mega-projects, including Pakistan’s first modern mass transport system in his hometown, the eastern city of Lahore.

The diplomat also said Sharif and his party would be friends of China in government or in opposition.

On Afghanistan, Islamabad is under international pressure to prod the Taliban to meet its human rights commitments while trying to limit instability there.

Unlike Khan, who has regularly denounced India’s Hindu nationalist Prime Minister Narendra Modi, the Sharif political dynasty has been more dovish towards the fellow nuclear-armed neighbour, with which Pakistan has fought three wars.

In terms of his relationship with the powerful military, Sharif has long played the public “good cop” to Nawaz’s “bad cop” – the latter has had several public spats with the army.


Shehbaz was born in Lahore into a wealthy industrial family and was educated locally. After that he entered the family business and jointly owns a Pakistani steel company.

He entered politics in Punjab, becoming its chief minister for the first time in 1997 before he was caught up in national political upheaval and imprisoned following a military coup. He was then sent into exile in Saudi Arabia in 2000.

Shehbaz returned from exile in 2007 to resume his political career, again in Punjab.

He entered the national political scene when he became the chief of the Pakistan Muslim League-Nawaz (PML-N) party after Nawaz was found guilty in 2017 on charges of concealing assets related to the Panama Papers revelations.

The Sharif family and supporters say the cases were politically motivated.

Both brothers have faced numerous corruption cases in the National Accountability Bureau, including under Khan’s premiership, but Shehbaz has not been found guilty on any charges. 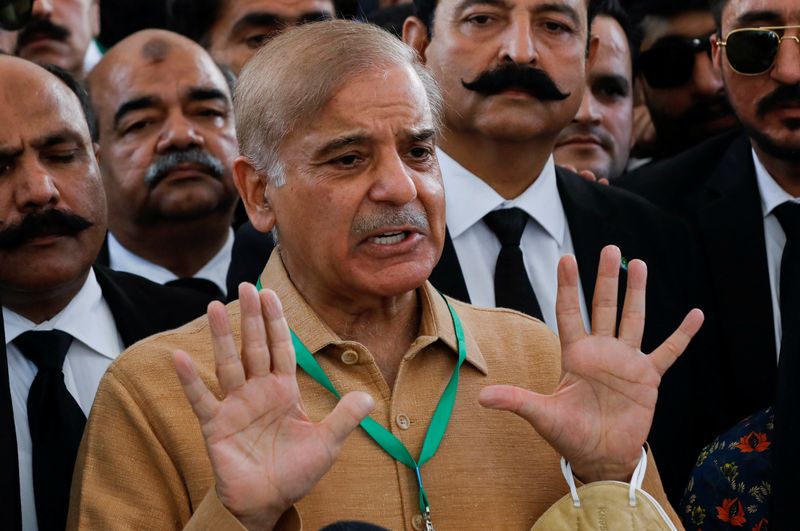