NEW YORK (Reuters) – On busy subway platforms across the city, New Yorkers checked their phones, read books and glanced impatiently at the countdown clocks as they waited for trains on Wednesday, a day after a man fired a handgun at passengers on a subway car.

In interviews, riders said they were upset by the highly unusual attack in which the man began shooting after setting off smoke canisters in a subway car, leaving 10 people with non-life-threatening wounds.

But even after several other outbursts of violence in stations this year, riders said they had workplaces, classes or homes to get to, and the city’s subway, one of the largest in the world, remained the most efficient way for them to travel.

“I was a little cautious but, hey, we’re back to normal,” said Matthew Mosk on an N train that had just passed through Brooklyn’s 36th Street station a day after one of its platforms had been smeared with the blood of wounded riders. “NYC strong. Just like it never happened.”

Older New Yorkers said the subway was far less menacing than when they were young and crime was rife on trains covered in graffiti. Newer arrivals to the city said it could stand to feel safer.

Most liked the idea of more police officers, though some wondered how much difference they could make.

Mayor Eric Adams, a former police captain who took office in January, had already increased the number of police in the Transit Bureau to 3,500, exceeding the 3,250 officers sent to the system last summer in a surge by his predecessor. On Tuesday, Adams said he would temporarily double that number.

There were none to be seen inside Brooklyn’s DeKalb Avenue station on Wednesday afternoon.


Lyric Archibald, 17, a Brooklyn resident waiting to travel to a Manhattan school where she teaches students how to play Double Dutch with jump ropes, said most police officers she saw were upstairs from the platforms, waiting to catch turnstile jumpers.

“Cops to me are supposed to protect us but sometimes it doesn’t seem like they do,” she said before her shiny, graffiti-free Q train screamed into the station.

Officials at the state-controlled Metropolitan Transportation Authority (MTA), which runs the subway, say serious crimes remain relatively rare on the system, but riders report feeling less safe when stations and trains are emptier, particularly after reports of high-profile crimes.

Mass shootings on the subway like Tuesday’s are virtually unheard of, with New Yorkers reaching back to the 1980s for a comparable episode. As for other criminal activity, New York Police Department crime data shows a mixed picture since due to the pandemic, ridership is now about 60% of what it was two years ago.

Before the pandemic, about 5.5 million subway trips were taken each weekday, but ridership plummeted in the first half of 2020 as COVID-19 surged. Many New Yorkers began working from home, as did suburban commuters. Tourists all but vanished.

The MTA, which has relied on train and bus fares and road tolls for about 40% of its revenue, has worked with Adams and his predecessor to encourage riders to return. Weekday ridership crossed back above 3 million trips last September, and there were an average 3.3 million rides each weekday last week.

On the DeKalb Avenue platform, Josie Chu, a 19-year-old economics student, checked notes on her laptop. She moved from Los Angeles two years ago, and had only regularly ridden the subway during its pandemic era.

“It’s just not safe, especially for Asians,” she said, noting the murder of Michelle Go, an Asian-American woman, by a man who pushed her onto the tracks at Times Square in January.


A few seats away, Michael Galindez, a 49-year-old electrician, was waiting to take his teenage daughter to art class. He grew up in East New York, Brooklyn’s poorest edge, and said he had been riding the subway by himself since he was 10.

“Our whole society was different then, unruly,” he said. “Now things are a bit calmer.”

Still, he thought there were fewer officers riding the train than in his youth and he was irritated by an uptick in rule-breaking: he has chastised at least one person for smoking on the train. And there seemed to be more people with mental health issues, he said.

“A lot of people have a lot of issues and there’s no one here to govern that,” he said. “I don’t want to be, you know, stabbed for telling someone to stop smoking.” 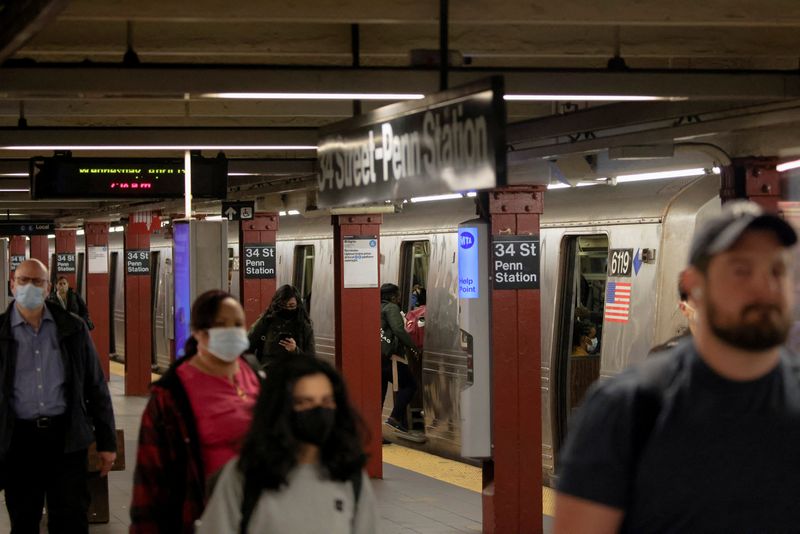