BEIJING -China’s imports unexpectedly fell in March as COVID-19 curbs across large parts of the country hampered freight arrivals and weakened domestic demand, while export growth slowed, prompting analysts to expect a worsening in trade in the second quarter.

The softer trade figures are likely to reinforce expectations of more policy support from the government, with an adviser on Wednesday calling for cuts in banks’ reserve requirements and interest rates to boost a flagging economy.

Inbound shipments fell 0.1% in March from a year earlier, marking the first decline since August 2020, customs data showed on Wednesday. That compared with a 15.5% gain in the first two months of the year and an 8% increase forecast by analysts in a Reuters poll.

The decline was broad-based. China’s imports of crude oil tumbled 14% in March and gas import volumes were the lowest since October 2020. Purchases of copper fell 8.8%, as COVID outbreaks hurt manufacturing and industrial demand for some raw materials remained soft.

Exports – a major driver of the economy – rose 14.7% in March, beating analyst expectations for a 13% rise, although slowing from a 16.3% gain in January-February.

“Due to the severe disruptions in factory operations, road transport and port congestion as a result of the worst COVID-19 wave and the most severe lockdowns since spring 2020, we expect export growth in dollar terms to slump to 0.0% year-on-year in April, while import growth is likely to drop further to minus 3.0%,” Nomura said in a note.

Many analysts expect trade conditions to worsen in April, on slower customs clearance and as the impact from a lockdown in Shanghai is felt.

China’s efforts to curb its largest COVID-19 outbreaks in two years have restricted activity in several cities including Shanghai and forced companies from Apple supplier Foxconn to automakers Toyota and Volkswagen to suspend some operations.

That likely reduced demand for imported raw materials for Chinese factories, according to Zheng Houcheng, director of the Yingda Securities Research Institute.

“The pressure on the global economy is likely to drive down commodity prices over the medium-term, which would hit China’s exports, in both volume and value, in the second half,” said Zheng.

China’s strong trade performance seen over the past two years is set to slow this year as other countries emerge from COVID lockdowns and higher energy prices and global logistics disruptions caused by Russia’s war in Ukraine squeeze exporters.

Factory activity in March fell as the declines in export orders accelerated, recent manufacturing surveys showed, with firms reporting clients cancelled or suspended orders due to the uncertainty over the Ukraine war.

Qi said this was due to “the war-induced weak purchasing power and risks of economic slowdowns in European economies”, adding that “exporters with exposure to the bloc may continue to feel the pinch”.

China posted a trade surplus of $47.38 billion in March, more than double the forecast $22.4 billion, thanks to the unexpected decline in imports. It reported a $115.95 billion surplus in January-February. 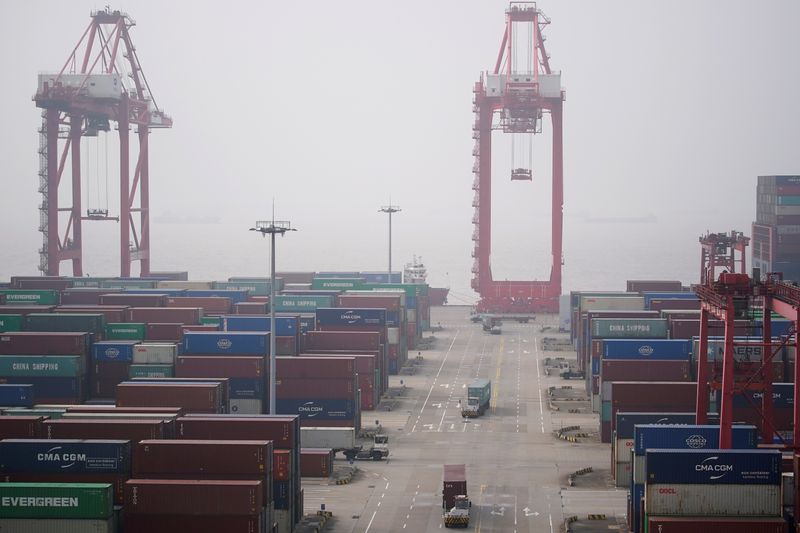