By Wa Lone and Poppy McPherson

(Reuters) -Rubble and ashes, overlooked by a single golden pagoda, are almost all that remain of the wood and brick houses most people had built for themselves in the quiet riverside village of Bin in the Buddhist heartland of central Myanmar.

Bin is one of more than 100 villages partially or completely burned by Myanmar’s military since the start of this year, its homes among more than 5,500 civilian buildings razed as troops try to suppress opposition to last year’s coup, according to media reports collated by activist group Data For Myanmar.

Dozens of satellite images reviewed by Reuters, supplied by U.S earth-imaging company Planet Labs and U.S space agency NASA, show widespread torching of villages in the central part of the country. The photos, largely confirming the local media reports, are among the strongest evidence to date that the military is using widespread arson to step up its assault on resistance in the central Sagaing region, where residents have told Reuters there is armed opposition to the junta.

“It’s a campaign of terror,” Tom Andrews, the United Nations special envoy for human rights in Myanmar, told Reuters. “If you live in an area or village that they (the junta) think is particularly supportive of those that have taken up arms then you are, in their view, the enemy.”

Andrews, who is based in the United States, told Reuters he has spoken by phone with several witnesses and other people providing him with information on the ground. He said these people told him that the military had increased attacks in Sagaing over the past few months, with soldiers leading ground assaults and jets carrying out air strikes.

The junta, which overthrew the democratically elected government of Aung San Suu Kyi on Feb. 1, 2021, has declared any opposition to it illegal and says the military is seeking to restore order in the country. Myanmar’s military did not respond to requests for comment for this story. Over the past few months the junta has accused opposition forces of burning villages, without presenting evidence.

The military and pro-military militias have been setting fire to villages in central Myanmar almost every day since December, according to reports from BBC Burmese and local media collated by Data For Myanmar and seen by Reuters. Publicly available NASA satellite photos confirm the location of almost all the largest blazes.

Military attacks and arson have led to large-scale displacements, residents told Reuters. More than 52,000 people fled their homes in the last week of February alone, according to the United Nations.

The recent burnings are the first time such a tactic has been seen in the formerly peaceful, mostly Buddhist central heartland. Over the past year, the region has been the site of intense fighting between junta troops and groups belonging to the People’s Defence Force (PDF), the armed wing of the National Unity Government (NUG), which was ousted in the coup. The junta has declared the NUG and PDF illegal and branded them terrorists.

Reuters spoke to 14 villagers from the Sagaing region who described how soldiers torched their settlements. Reuters was unable to confirm certain aspects of their accounts. But they were nonetheless consistent with the satellite images seen by the news agency.

‘DESTROYED IN A SECOND’

Bin was set ablaze by the military on Jan. 31, according to seven residents who spoke to Reuters.

Photographs and video of Bin taken by locals over the following days, seen by Reuters, show villagers picking their way through a burned wasteland. “We lost everything we have,” 41-year-old Maung Zaw, a peanut farmer, told Reuters by phone. “I will fight against this military dictatorship to the end.”

Three people said they helped carry elderly relatives and friends out of their homes as they were about to be torched or already blazing. One man, who asked not to be named for fear of retribution by the military, told Reuters he crawled into nearby fields and covered himself with tomato plants to hide from the soldiers.

A satellite photo dated Feb. 7, shared with Reuters by Planet Labs, shows much of the village burned to ashes, with about 100 homes destroyed. A photo from Nov. 27 shows the village intact. Reuters also saw six photographs and a video taken by residents from a drone, showing the destruction.

The witnesses said nobody was killed but they lost storehouses full of crops and food for animals as well as their homes, built over generations.

“We built our house our whole lives, it has been destroyed in a second,” said a teacher in his 20s from Bin, who asked not to be named, for fear of retribution from the military.

Reuters was unable to reach local authorities in the region to confirm the attack on Bin and other villages.

The burning of villages and displacement of inhabitants in areas such as Sagaing and Magway – where much of the country’s crops are produced – will disrupt sowing and harvesting, according to the Myanmar Food Security Cluster, a body coordinating the response of U.N. and aid organizations to food crises in the country. “Reduction in production in such areas will lead to deficit in overall food supply and will further escalate the already high food prices,” the group told Reuters in a statement this week.

Beyond the razing of Bin, seven other people told Reuters they witnessed the burning of another three villages in the Sagaing region in February: Ohn Hnae Bok, Hna Ma Sar Yit and Chaung-U. Three NASA images and eight Planet Labs photos show fires took place in those villages on the dates the people described the attacks.

Two people from Hna Ma Sar Yit said soldiers shot two people dead while three elderly people burned to death in their homes. Reuters could not independently verify their accounts. Myanmar’s military has cut internet access across Sagaing region, complicating efforts to authenticate information. The junta did not respond to requests for comment.

Burning villages is a decades-old tactic of the Myanmar military, several analysts told Reuters, used to deprive insurgencies of support. Most recently, the army destroyed hundreds of villages in 2017 as it pushed hundreds of thousands of Muslim Rohingya out of the Rakhine region.

Last month the United States formally determined that the Myanmar military committed genocide against the Rohingya. The United Nations has said Myanmar troops carried out a crackdown with “genocidal intent” that included mass killings, arson and rape. Without evidence, Myanmar’s military said the Rohingya burned their own homes down.

The military is “attempting to crush, or at least reduce to a manageable level,” resistance forces in Sagaing before the onset of the monsoon season in May or June, when troop movement becomes more difficult, said Anthony Davis, a security analyst with the UK-based Janes defence intelligence company.

The junta did not respond to requests for comment.

(Reporting by Wa Lone and Poppy McPhersonEditing by Bill Rigby) 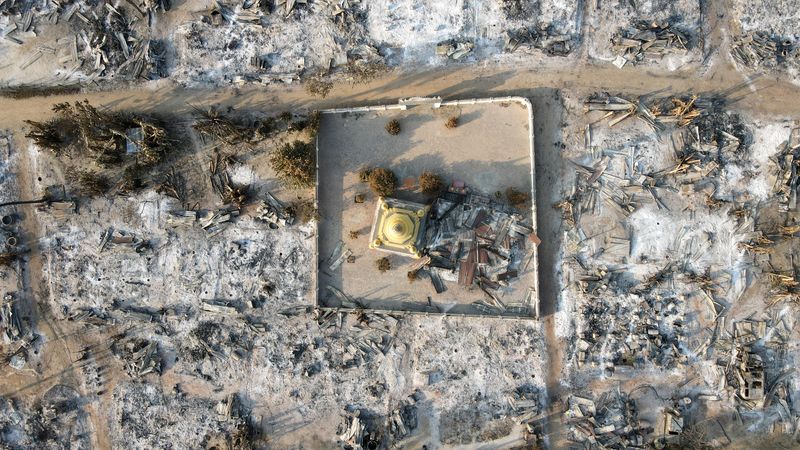 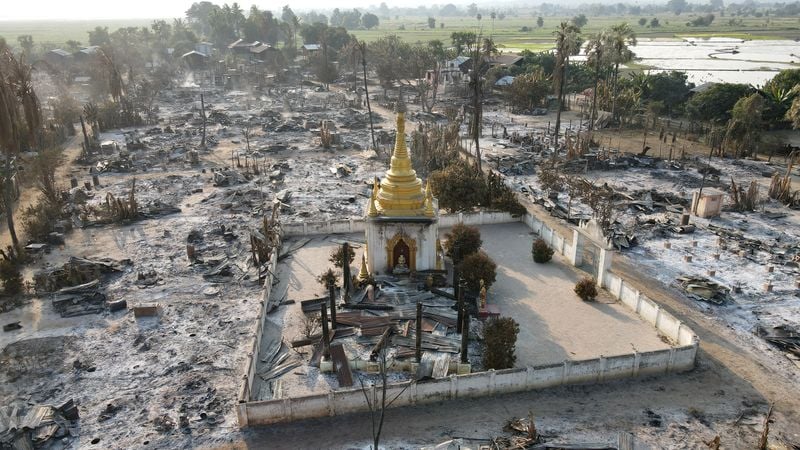