PARIS -The party of far-left candidate Jean-Luc Melenchon gave no voting instructions for the French presidential runoff after its internal consultations showed most people would abstain or vote blank on April 24, adding to the uncertainty over the outcome.

President Emmanuel Macron and his far-right challenger Marine Le Pen are looking to attract voters who chose Melenchon, after he came third in the first round on April 10 with about 22% of the vote.

With the electorate fragmented and undecided, the election will likely be won by the candidate who can reach beyond his or her camp to convince voters that the other option would be far worse.

After the first round, Melenchon called on his supporters not to vote Le Pen, but he stopped short of advocating Macron and said his party would hold a public consultation to help guide the millions who backed him.

According to results published on Sunday, about 215,000 party sympathizers who participated in that, more than 66% said they would abstain, leave their ballot paper blank or spoil it. Just over 33% said they would vote for Macron. The option of voting for Le Pen was not given to respondents.

“The results are not an instruction to vote for anybody… everyone will conclude from this and vote as they see fit,” Melenchon’s campaign team wrote on its website.

Pollsters estimate the overall abstention rate for next Sunday’s election at about 30%, similar to the first round.

It is not clear what a high abstention rate either overall or among Melenchon voters would mean for either candidate. Both Macron and Le Pen were able to mobilise their core support in the first round, but are struggling to appeal beyond their own camps.

The vote next Sunday is a repeat of the 2017 match-up in the second round. Then, Macron, a pro-European Union centrist, easily beat Le Pen when voters rallied behind him to keep her party out of power.

This time round he is seen as facing a much tougher challenge, although the latest opinion polls give him a nine-10 point lead over Le Pen.

An IPSOS-Sopra-Steria opinion poll on Saturday showed that some 33% of Melenchon voters would back Macron, with 16% supporting Le Pen on April 24. But 51% of people were undecided.

For decades, a “republican front” of voters of all stripes rallying behind a mainstream candidate has helped to keep the far right out of power.

But Macron, whose sometimes abrasive style and policies that veered to the right have upset many voters, can no longer automatically count on that sentiment.

Le Pen is going for the more working-class, rural part of the Melenchon base by focusing on the cost of living, rising food costs and high petrol prices following the war in Ukraine.

Macron, meanwhile, is trying to woo the more educated, centre-left and urban segments of Melenchon supporters.

On Saturday he told supporters in Marseille, which voted massively for Melenchon, that he had heard their message and would focus his new presidency on making France free of fossil fuels. He slammed Le Pen as a “climate sceptic”.

“I don’t know what he is basing that on, but I’ve never been climate sceptic and have a programme that takes into consideration the environment and ecology,” Le Pen told France 3 television.

Macron’s promises to do more on the environment may not hit the spot for some voters. The head of the Green party, Julien Bayou, said the president was not credible on the subject.

“He had five years to act and he didn’t,” he told Franceinfo radio, adding that the Green call to vote for Macron was purely to stop the far-right coming to power.

Climate change activists from Extinction Rebellion forced the closure of a main square and avenue in the capital on Saturday, protesting the environmental programmes of both candidates.

(Reporting by John IrishEditing by Kirsten Donovan and Frances Kerry) 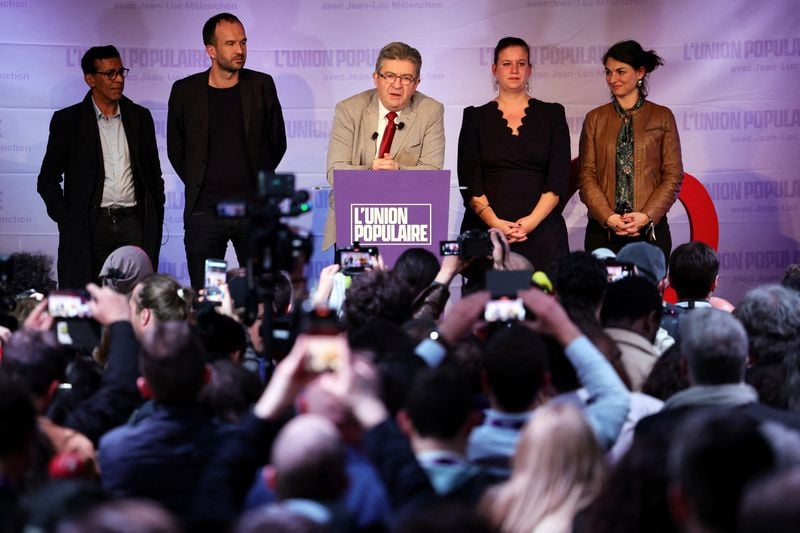