HONG KONG (Reuters) – Several Russian banks plan to issue payment cards that use the network of China UnionPay as well as that of home-grown payment system Mir, after Visa Inc and MasterCard Inc joined other Western firms in suspending operations in Russia.

UnionPay and Mir are among few options left for Russians to make payments abroad since Russian banks were isolated from the global financial system following Russia’s invasion of Ukraine. Russia calls its actions in Ukraine a “special operation”.

Whereas many Western nations have condemned Russia’s conduct, ally China has refrained from direct criticism, effectively allowing Chinese companies such as UnionPay to continue business as usual with Russian partners.

Several Russian lenders already issue cards with UnionPay. Still, the Chinese payment service is wary of cooperating with sanctioned Russian banks for fear that could lead to itself being sanctioned, the RBC business daily reported on Wednesday, citing five unidentified people at major Russian banks.

UnionPay did not respond to a Reuters request for comment.

China approved the central bank’s creation of UnionPay as a coalition of banking operators in 2002 to allow domestic inter-bank transactions and settlements across different platforms.


It has 87 shareholders including affiliates of the People’s Bank of China, commercial lenders such as Industrial and Commercial Bank of China Ltd and China Construction Bank Corp, and rural credit providers.

It enjoyed a monopoly before China allowed foreign payment networks to set up onshore operations in 2020, and in recent years has rapidly expanded overseas.

UnionPay ranked first by number of cards in circulation worldwide as at the end of 2021 with 9.4 billion, showed data from researcher Nilson. Visa had 3.7 billion and Mastercard 2.5 billion.

HOW HAS IT GROWN INTERNATIONALLY?

Increased Chinese tourism spurred UnionPay to build offshore ties with banks and merchants, first in Hong Kong in 2004 and United States in 2005.

UnionPay cards are issued in over 70 countries and regions, it said.

Holders of UnionPay cards issued by HSBC can also make withdrawals from that bank’s cash machines in Britain.


UnionPay is fast catching up with global competitors in absolute volume processed, benefiting largely from the rising purchasing power of Chinese buyers domestically and overseas.

About 40% of global card purchase transaction volume was through Visa in 2020, but UnionPay is a close second at 32%, followed by MasterCard at 24%, Nilson data showed.

HOW BIG IS UNIONPAY IN RUSSIA?

Over 55 million merchants globally accept UnionPay cards as of March 2021. Acceptance coverage is 95% in Russia where over 1.6 million point-of-sale terminals support UnionPay QuickPass payment technology, UnionPay statements showed. More than 4 million UnionPay cards have been issued in Russia, it said.

The high penetration rate has prompted Russian banks to turn to UnionPay after Western nations imposed an array of sanctions.

“We kindly ask you to make a contribution into restoring peace in Ukraine and cease your operation in the Russian Federation,” NBU Governor Kyrylo Shevchenko said in a March 17 statement. 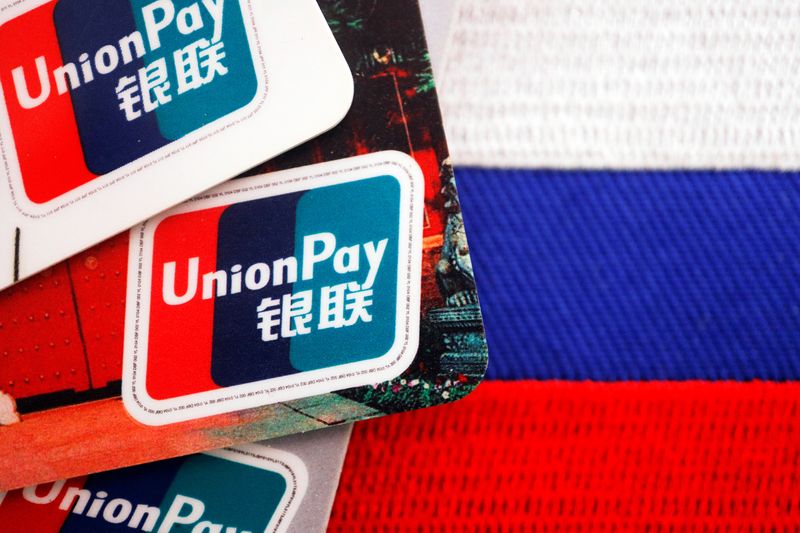