(Reuters) – Russian Central Bank Governor Elvira Nabiullina will have to deal with a full-scale economic crisis, tackling unprecedented uncertainty stemming from Western sanctions, as she begins her new five-year stint in charge of monetary policy.

A majority of lawmakers in the Russian lower house of parliament voted on Thursday in favour of Nabiullina’s reappointment as central bank chief, supporting the choice made by President Vladimir Putin.

Nabiullina will now have to steer the commodity-dependent economy through its steepest contraction since the years following the 1991 fall of the Soviet Union, fighting inflation that accelerated this month to a 20-year high of 17.62%.

Nabiullina told lawmakers on Thursday that her priority task was to secure the availability of financial resources for an imminent structural transformation of the economy.

“Our task is to ensure that our economy is competitive. In my view, we don’t need to pursue the policy of self-isolation in all directions,” the 58-year-old central bank veteran told the lower house of parliament, the Duma.

“Combating inflation is also the most important task, that no one has abandoned.”

The central bank will consider cutting the key interest rate from 17% at upcoming board meetings, Nabiullina said, repeating her intention to return inflation to its 4% target by 2024 and flagging the economic challenges Russia will face.

There are several challenges the central bank will have to deal with, including when and how to lift capital controls, as well as the possible need to recapitalise some Russian banks.


“So in short, the CBR Governor has her work cut out for her. I wouldn’t want to be in her shoes right now,” Orlova said.

Nabiullina, an economist and former Kremlin adviser who became the first woman to chair the Bank of Russia, has strong support from Putin who has repeatedly praised her in the role since appointing her in 2013.

Widely respected as one of the world’s top central bankers, partly for her efforts to rein in inflation, Nabiullina was targeted by sanctions in April as part of sweeping Western penalties against Russia for what it calls its “special military operation” in Ukraine, which began on Feb. 24.

Sanctions have also frozen nearly half of Russia’s $640 billion in gold and FX reserves controlled by the central bank, spurred capital flight from Russia and pushed it towards a possible debt default, while denting the country’s access to the global trade and financial systems.

“Hence the CBR will have a task of rebuilding the country’s FX buffer, in the meantime facing the challenge of investing it into assets that would be well-protected from seizure by the U.S. and its allies,” Orlova said.

Adopting to new economic realities where well-established trading links with other countries are damaged will also be on the central bank’s radar.

“We need to move forward… Sanctions have now disrupted normal payments for goods and services, many companies have encountered that. And the priority is international settlements for companies and citizens,” Nabiullina said. 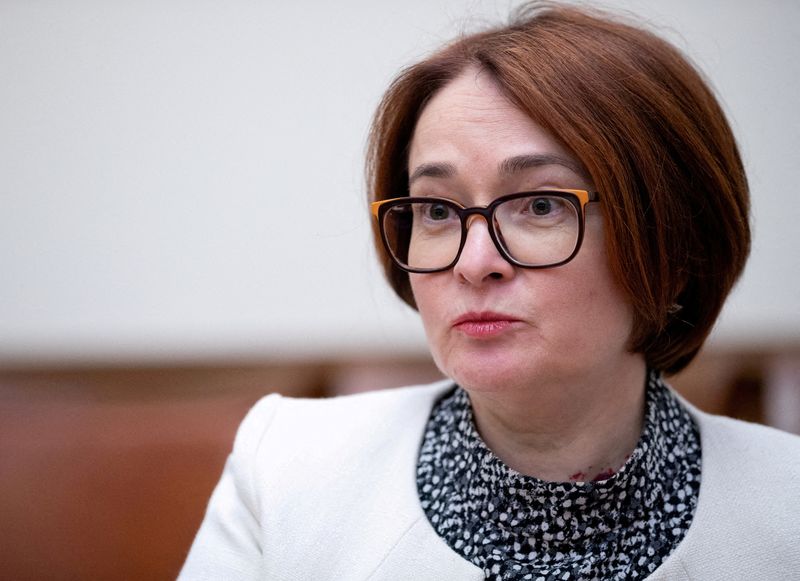