NEW YORK (Reuters) – Starbucks has hired a former McDonald’s executive to oversee technology as returning CEO Howard Schultz explores changes to the coffee chain’s drive-thru, mobile order-and-pay and other systems. Deb Hall Lefevre will become Starbuck’s chief technology officer on May 2, according to a spokesperson. She takes over for Hans Melotte, who served as interim CTO for five months. Changes are likely to include increasing personalization in the company’s mobile app for customers, as well as improvements to systems for employee training, scheduling and equipment maintenance to free up baristas to spend more time with customers, a Starbucks spokesperson said, adding Lefevre was not available to comment. Hiring a CTO with experience in restaurants and retail will ensure that digital transactions run smoothly, which became particularly important during the pandemic as more customers flocked to mobile apps and new payment systems, said Chas Hermann, a consultant and former vice president of marketing at Starbucks. Schultz “wants to have someone that can really run the engine in the car,” Hermann said. “But the driver in the seat will be Howard.” As he returns to the CEO role for the third time, Schultz is plotting a broader corporate overhaul that also includes improved employee benefits aimed at deflating a ballooning union organizing effort at hundreds of cafes, which has been driven in part by barista burnout from a deluge of mobile orders. Schultz already freed up potentially billions of dollars for investments by suspending share buybacks. When Starbucks reports earnings on May 3, investors will look to see if the company cuts its guidance and if price hikes have offset rising costs. The coffee chain missed sales and profit estimates last quarter and its stock has since fallen another 20% and is down nearly 33% for the year.

“We have to reimagine the customer experience….We have to reimagine mobile-order-and-pay, the drive-thru,” Schultz said in an April 11 video message to store managers and seen by Reuters. At McDonald’s Corp, Lefevre oversaw all aspects of technology for its roughly 14,000 U.S. restaurants – helping launch its first app, introducing kiosks where customers place their own orders, launching digital menu boards – before moving in 2017 to Alimentation Couche-Tard Inc, the global operator of Circle K and other convenience stores. Under her watch, Circle K launched trials of automated checkout systems at stores in Arizona – similar to Starbucks’ first cashier-less location that it opened with Amazon Go in New York City in November. 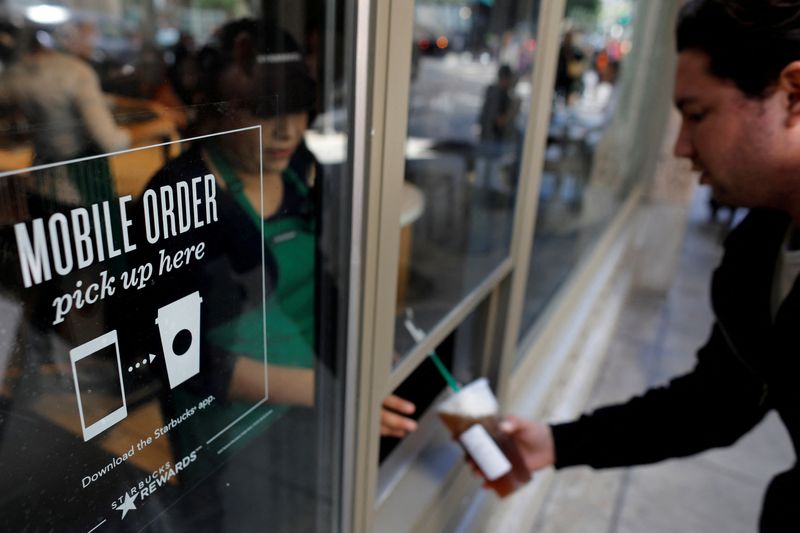