HOW LOW IS THE DEATH RATE?

Shanghai had reported no COVID-19 deaths for more than a month after the current outbreak began in early March. But deaths suddenly started to creep up over the past 11 days. The city of 25 million people has now reported 285 COVID-related fatalities since April 17, from around confirmed 500,000 cases.

Hong Kong, by comparison, recorded more than 9,000 deaths since February, with around 1.2 million confirmed infections among its 7.4 million residents.

Shanghai’s numbers are also surprising international observers because of the unusually large proportion of asymptomatic cases.

COVID first emerged in the central Chinese city of Wuhan in 2019-20, and officially caused around 4,600 fatalities in its first wave, mostly in Wuhan and surrounding Hubei province. China’s toll was soon massively overshadowed by deaths across the rest of the world.

Several studies have cast doubt on China’s numbers, with one released in June 2020 saying they “fall outside of recognised and accepted medical norms”. It estimated that 36,000 people could have died in Wuhan alone, more than 10 times the official figure.


Some experts say Shanghai’s low death count is part of that pattern of under-reporting.

“Because of the lockdown, the one consequence is you don’t know your neighbour,” Mai He, a pathologist with Washington University in St. Louis, who was a co-author of the 2020 study.

“They may die in their apartment and you have no idea at all. That happened in Wuhan too,” he said, adding deaths in Shanghai could now be “at least” twice normal levels.

“The main thing is the lack of transparency – without transparency, everything is just a guess,” said He. “It’s a reasonable guess, it’s an educated guess, but it is still a guess.”

The Shanghai government did not immediately respond to a request for comment. The Chinese government and state media have repeatedly dismissed claims that COVID deaths have been under-reported.

ARE THE ELDERLY BETTER PROTECTED?

Most people infected in Shanghai are young, with the local government estimating on April 20 that only a fifth of positive cases were over 60, compared with 27% in Hong Kong.

The majority of deaths in both cities have been among elderly, unvaccinated people with underlying health problems.


Around 62% of Shanghai residents aged 60 or over had received a full vaccination so far and 38% of the over 60s had received a booster shot, according to Zhao Dandan, the deputy director of the municipal health commission.

ARE ALL COVID-RELATED DEATHS INCLUDED IN DATA?

China does not give a definition for what it determines to be a COVID death, prompting speculation that not all fatalities related to the coronavirus are counted in official statistics.

Relatives of patients at the Donghai Elderly Care Hospital, Shanghai’s largest care home, said several residents caught COVID-19 there and died in late March and early April, which wasn’t reported in official data at the time.

Calls to the Donghai hospital were not answered.

Reports in local media suggest some crematoria were stretched to breaking point.

“The number of deaths has doubled from a year ago, and we are completely overworked,” an official at a funeral home in the suburb of Jiading was cited by local media as saying.

Official data was not available and it wasn’t clear if additional deaths were caused directly by COVID-19. Reuters was unable to reach the funeral home for comment.

IS THERE ANOTHER EXPLANATION?

A study estimated the coronavirus in Hong Kong, which implemented less rigorous testing than Shanghai, may have infected nearly half of its residents, meaning its fatality rate could also be much lower.

Zhang Zuofeng, chair of the department of epidemiology at University of California, Los Angeles, said while deaths were low, they were still consistent with his estimates.

“Shanghai has no motivation to deliberately suppress any deaths after the lockdown decision,” he added, noting that more deaths could help justify the city’s unpopular controls. 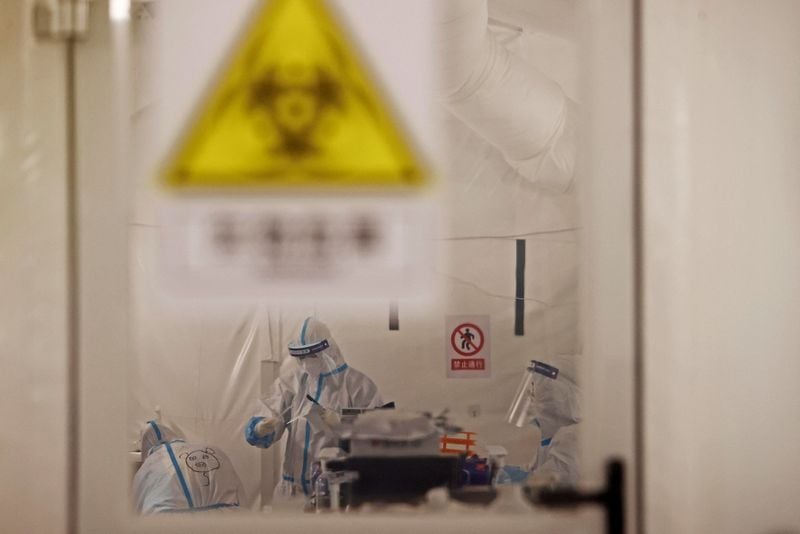