By Joe Skipper and Steve Gorman

CAPE CANAVERAL, Fla. (Reuters) -Four astronauts, three from NASA and one from the European Space Agency, arrived at the International Space Station (ISS) on Wednesday and docked their SpaceX capsule, just two days after the last crew to depart the orbiting outpost returned to Earth.

Rendezvous of the Crew Dragon capsule with the station less than 16 hours after launch from NASA’s Kennedy Space Center in Cape Canaveral, Florida, marked one of the fastest flights by Elon Musk’s SpaceX to the ISS from liftoff to docking, NASA webcast commentators said.

The fully automated docking took place at about 7:37 p.m. EDT (2337 GMT) while the Crew Dragon capsule, dubbed Freedom, and the space station were flying about 260 miles (420 km) above the central Pacific Ocean, according to NASA.

After docking ahead of schedule to the station’s Harmony module, crew members spent two hours conducting standard leak checks and pressurizing the chamber between the capsule and the ISS before opening the entry hatches.

A live NASA video feed showed the smiling new arrivals floating headfirst through the padded passageway one by one into the station. They were greeted with hugs and handshakes by the four-member team they will be replacing – three Americans and a German ESA crewmate due to end their mission next week.

Three Russian cosmonauts currently sharing the station but preparing for a spacewalk on Thursday were not present for the welcome.

SpaceX was founded in 2002 by Musk, the billionaire CEO of electric carmaker Tesla Inc who on Monday clinched a deal to buy social media platform Twitter <TWTR.N>. It has now launched seven human spaceflights over the past two years.

That includes a four-man team organized by Houston-based company Axiom Space that splashed down on Monday after a two-week stay aboard the ISS, capping the first all-private astronaut mission to the orbiting laboratory.

The Crew 4’s predawn launch on Wednesday came just 39 hours after the Axiom team safely parachuted into the Atlantic off the Florida coast in a separate Crew Dragon capsule.

The brief interval between Axiom’s splashdown and the Crew 4 launch vividly demonstrated a swift turnaround capability forged by NASA and SpaceX, at least when weather conditions permit, built around a fleet of reusable rockets and crew capsules.

The lower-stage of the Falcon 9 rocket from Crew 4’s launch flew itself back to Earth for a safe return landing just minutes after liftoff on Wednesday, marking the fourth successful flight and recovery of that same SpaceX booster. The Crew Dragon capsule Freedom was making its maiden flight.

Crew 4 was under the command of Lindgren, a board-certified emergency medicine physician and one-time flight surgeon making his second trip to the ISS, where he logged 141 days in orbit and performed two spacewalks in 2015.

The designated pilot for mission was Hines, a rookie astronaut and U.S Air Force fighter pilot who has accumulated more than 3,500 hours of flight time in 50 types of aircraft and had flown 76 combat missions.

Watkins, a geologist who earned her doctorate studying large landslides on Mars and Earth, was also making her debut spaceflight and was set to become the first African-American woman to join a long-duration mission aboard the ISS.

They were joined by Cristoforetti, an ESA astronaut and Italian Air Force jet pilot making her second flight to the space station and slated to assume command of ISS operations during the team’s six-month stint, becoming Europe’s first woman in that role.

The ISS, the largest artificial object in space, spanning the size of an American football field end to end, has been continuously occupied since November 2000, operated by a U.S.-Russian-led international consortium of five space agencies from 15 countries.

An international crew of at least seven typically lives and works aboard the platform while traveling at 5 miles (8 km) per second, circling Earth once about every 90 minutes.

The station’s microgravity environment provides scientists a unique laboratory to run experiments on everything from fluid mechanics and combustion to cell growth and aging. 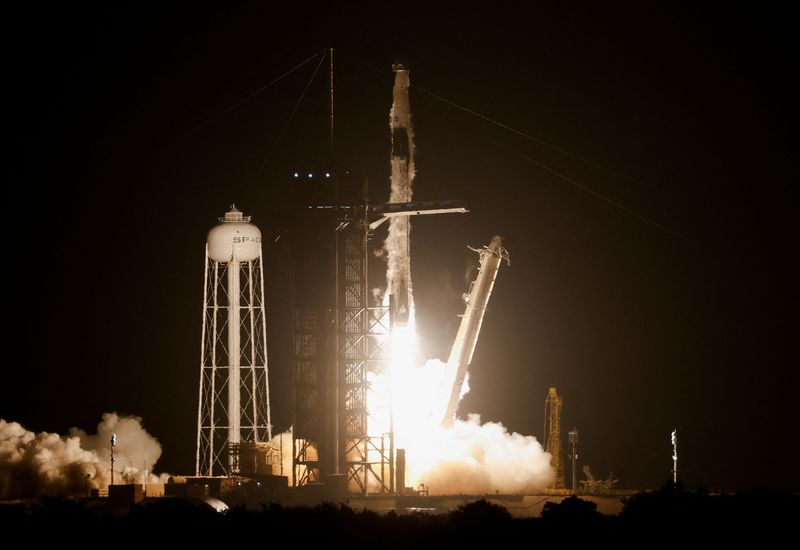 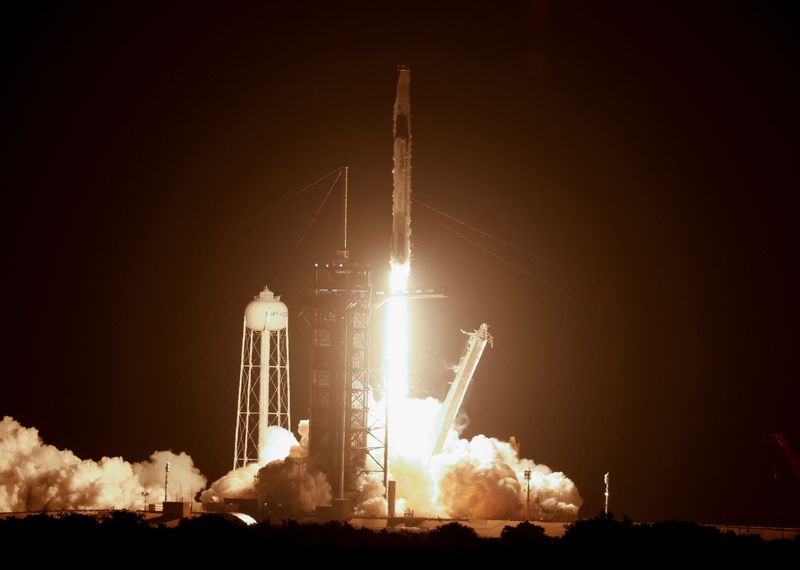 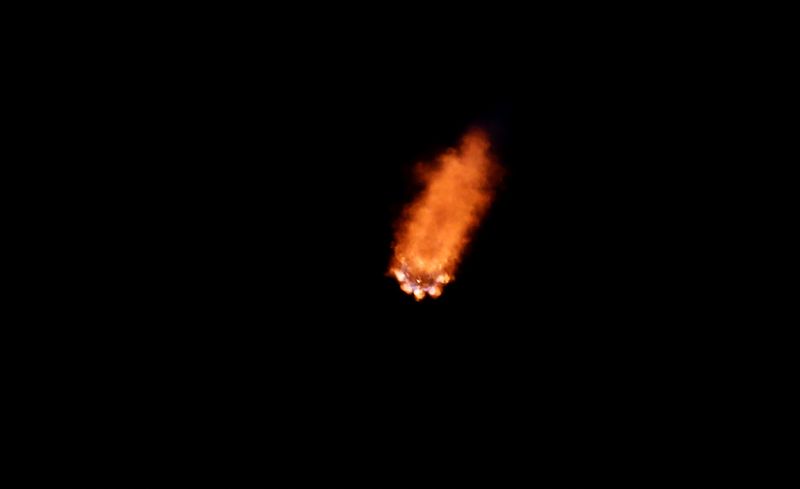 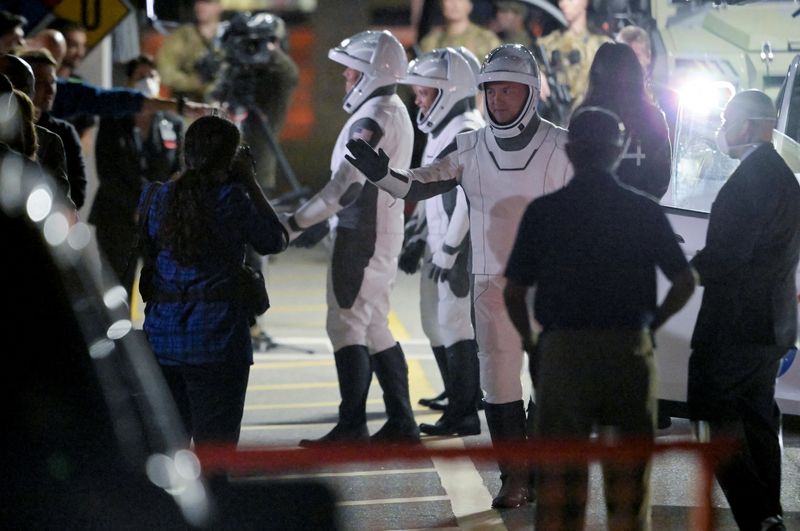 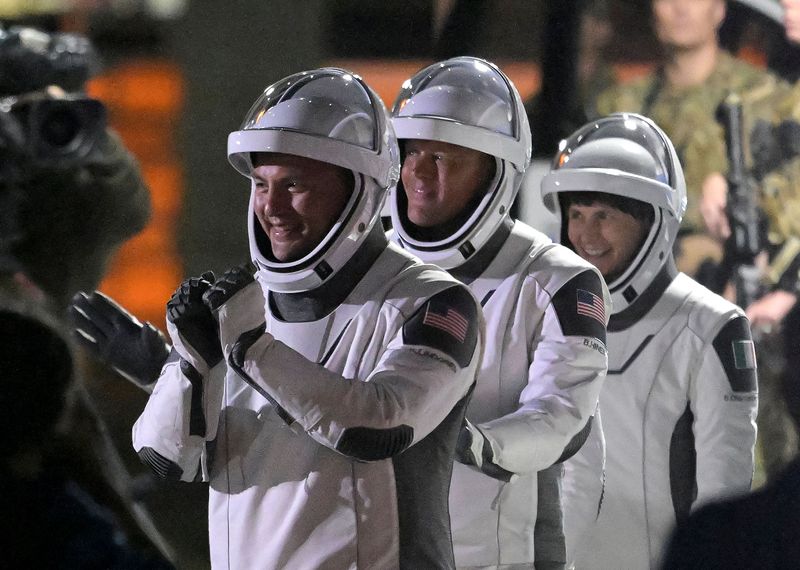